Skip to content
This is snotty the snot pack. (we have lots of packs, so some of them get names)

Snotty is a Black Diamond Zippo pack, which I’ve owned since circa 2001. It’s a great daypack. Right size, solid construction, minimal extras, and a simple harness thats just perfect (for me). A put a big hole in the pack, and took the first step in naming it, early on, slidding down a rock slab in Kentucky with a wad of cams in the bottom. Seam grip and duct tape patched that, and the same patch is still alive and well today. Once we moved to Utah and spent a lot of time canyoneering, Snotty started getting seriously worked. The zipper along both side became non-functioning, and holes appeared. I cut off the ski straps and top compressers, patched holes, and glued the zipper shut with contact cement. Snotty was born, full haired and ready.

It’s been in use ever since, though my half assed top strap is less than ideal for loads more nuanced than the wetsuit, rope and drybag of canyoneering.

Sunday, I decided to fix that, keeping myself busy and dulling the temptation to buy another pack for lightweight backpacking and future bike tours. (The Arc’teryx RT25 was sold on ebay last month, it’s overkill suspension not being to my liking. And that Talon 22…)

I removed the zipper completely, pulling apart the seams, and grafted in an insert on both sides that expanded the packs volume a hair. At the top, I added two more panels that came together with some webbing and closed like a drybag (one feature I did like on the RT25). It expands capacity a bit, still maintains enough room at the top to fit in a coiled 8mm static line, and has virtually nothing to break. 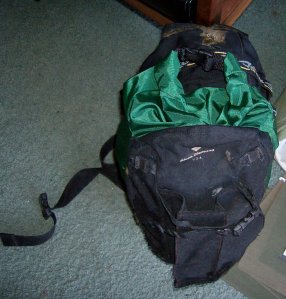 I used some barge cement to patch a few more small holes that had developed in the last year, and it’s ready for more abuse! Plans in the works for early this summer should test it nicely.

Overall it gives me good opportunities to ponder the gear paradox. I love new gear, and hate it. I like shiny stuff that will work better than anything before, but dislike the trials of ascertaining a pieces quirks. Most importantly, I dislike the downward spiral of “this is better because___”. While often quite true, it ends up being an (almost) zero sum game. The last thing the world needs is for me to own more crap. Especially brand new crap.