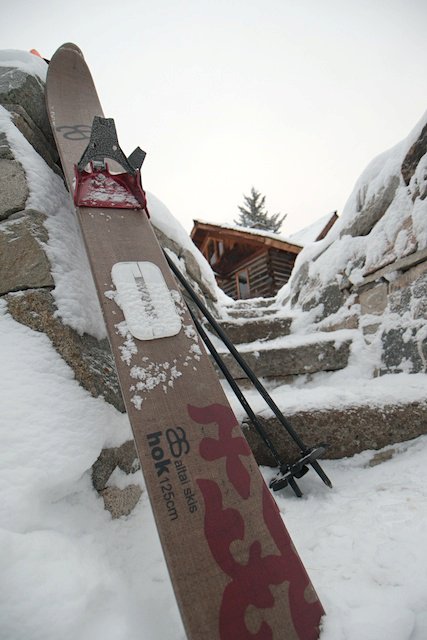 The Altai skis Hok, available this fall.  Comes in 125cm and 145 cm lengths, looks to have a nice early rise tip, minimal sidecut, and a waist around 120cm.  Metal edges, and an inset skin underfoot.

I’m skeptical of the perma-skin, but everything else looks good.  Of course the golden question is how much do they weigh?  A total under 3 lbs a ski would make them a viable, and potentially extremely useful, tool for multiday wilderness travel.  I’m intrigued enough that I’m trying to get my paws on a pair ASAP.

The ski will come with inserts for standard three pin bindings (good choice), and the company is also importing and selling the X-Trace universal binding, which up til now was only available in North America (as far as I know) via Hagan and their X-Trace XC ski.  Again, it looks like it should be a functional design, too bad according to the website they weigh (only! ack!) 950 grams a pair.