Most readers will be familiar with the Andrew Badenoch/77Zero/Fatbikerafting the Arctic/Kickstarter debacle. For those who are not, the short version is as follows. In January Badenoch, with no endurance or wilderness palmares that I’ve been able to dig up, went live with a funding proposal for a scandalously ambitious loop trip from Seattle to the Arctic coast and back again. His proposed time frame was March through late autumn, and the advertised product (and thus according to Kickstarter rules raison d’etre, as Kickstarter prohibits “fund my life” projects) was a documentary film. Badenoch got a late start due to poor planning, suffered from mis-managed logistics in British Columbia, and pulled the plug on the trip in mid-summer, having not made it beyond pavement. In spite of regular Facebook and Twitter activity over the summer, he made no plain statement of failure until recently. He has intimated, but not said outright, that be plans to have another go next year. Googling and perusing Badenoch’s websites and social media feeds will reveal the details, and answer whether my characterization here is fair.

In the past few weeks Badenoch has had a rough time of it.  Considerable internet speculation and abuse culminated in a brief article at Outside and a prominent excoriation at BikeSnobNYC.  The future of his project is very much in doubt.

There were many questions concerning Badenoch’s plan from the beginning, though none of them were asked very loudly.  I was on the verge of asking them here several times over, but always rejected the subject as bad style.  I don’t intend to do that again.

The first major question concerns Badenoch’s experience and route choice.  Kickstarter notes in their guidelines “If a creator has no demonstrable experience in doing something like their project or doesn’t share key information, backers should take that into consideration.”  Badenoch listed nothing about his own cycling, packrafting, or wilderness accomplishments.  There are few people alive today with the experience to evaluate his proposed route as a whole, and most of them communicated skepticism privately.  That being said, it doesn’t take much research to question the practicality of lugging any sort of bike across ANWR, along the Iditarod from the Yukon to the Happy in high summer, or across Prince of Wales Island from north to south.  I’d argue that his trip was more ambitious than Skurka’s 2010 Alaska-Yukon loop, and it is worth noting the Skurka, whose solo experience is almost unrivaled, almost got broken a few times in the process of completing one of the most impressive mental and logistical feats in recent memory.

I do not think that Badenoch’s ignorance of what he was getting into, and subsequent bailing, was what earned him so much grief.  I don’t even think it has much to do with his tendency to be overly intellectual and obfuscatorially verbose, but I’m a sympathetic audience there guilty of many of the same things.  I think the reason Badenoch got so much shit was that he pushed the bounds of what crowd-sourced funding should be.  In the age of GoPro, Youtube, and the first worlds inundation with leisure time, you need a very good reason to ask other to pay for your vacation, however eccentric and ambitious.

Photo by USGS. Go here for a truly huge version.

I find it easiest to think through with myself as an example.  I would like a new camera.  I would like other things more, so I haven’t bought a new camera this year.  I live near Glacier, hike there more than most, and know more about it than many.  So what could I offer others, in exchange for some of their money, which I would use to buy a camera, that would provide for a justifiable, equitable, and moral exchange?  Prints of nifty pictures?  A photo book, electronic or paper?  A photo project based around a project, such as one I’ve been thinking about anyway, like visiting and documenting all of the park’s shrinking glaciers next year?  Is there a way in which my position as neither a scientist nor a pro photag might make this valuable to others, or would I be merely selfish and sneaky in even contemplating such a thing.

I’m a huge fan of authentic media shot in the moment [though the Banff edit was scrubbed a fair bit], but Badenoch’s project just didn’t measure up when it came to salient details.  A comparable project, with more credibility and conceptual beef, would be appropriate for crowd-sourced funding.  Giver beware.

13 thoughts on “Money for something” 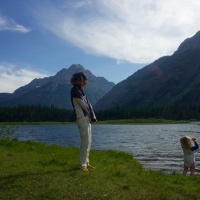 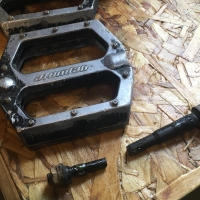