Black Diamond’s Alpine Start hoody hasn’t changed much in the two years it’s been on the market (and since I first wrote about it). The material, a light and tough softshell with excellent breathability and darn good weatherproofing, is unchanged and remains the heart of what is (still) the most versatile and all-around best outdoor garment I’ve ever worn.  The features have changed just a bit, with the hood having gotten better for 2016, and some of the fitment oddities (stiff front zip, odd neck cut) having remained the same.  It’s still a brilliant piece, but it is also, frustratingly, still short of perfection.

The number of occasions in the past 26 months when I haven’t had the Alpine Start along are very few, and the only reason I can recall them so well if that almost without exception I regretted not bringing it.  I find it windproof enough for fairly cold and windy ski touring, breathable enough for summer hiking, and airy yet bugproof enough to serve as an anti-sandfly layer while fishing.  My original grey one has been canyoneering and bushwacking a bunch, and has yet to get it’s first hole.  For fabric which is 88 grams per meter that is nothing short of remarkable, and I’d suggest that anyone who suggests otherwise is operating in the realm of theory rather than reality.

My gripes with version one concerned the hood, which had a floppy brim and cinch cords which didn’t do a good job of preserving peripheral vision, and a neck which felt narrow and set back.  This last thing didn’t bother me as much as a lot of folks, but was noticeable.  Smaller issues were the stiff #5 main zipper, and a torso which was a little shorter than ideal.  As can be seen by comparing this photo with the very first, the hood is the major object of revision.  Instead of perimeter cords which cinch near the jaw, and no rear cord whatsoever, the newer (for me, black) version has perimeter cords which are routed back to a single cordlock in the rear of the hood.  Tightening that cord cinches around the side of the face, and under the ears.  This system keep the hood tight to the head no matter how many hats you might be wearing, and work whether the coat is zipped all the way up or not, but it also pulls the hood back away from your cheeks when tightened (below I’m pointing to where the cord travels back from the edge of the hood to the cordlock).  It’s an improvement, though not ideal.  I’d prefer the extra weight of a true three-point adjustable hood, but can see why BD went a different direction. 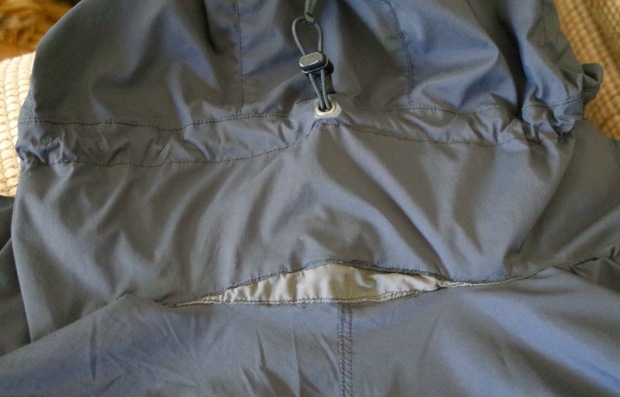 Unfortunately the weird neck fit still exists.  I did an experiment with my new, black Alpine Start, and used some material from the hood of my old one to add a dart to the back of the neck.  This makes a noticeable improvement, and confirms my suspicion that BD just needs to add a bit more material to solve this issue definitively.  Doing this is not a beginner project, but does help with fit.

Other objections come down to durability (the #5 zip has been flawless and smooth, so I can live with the stiffness), and preference.  The Alpine Start fits like a shirt, with sleeves and a torso which are trim and just long enough to cover baselayers, when you wear your “normal” size.  For me this is medium.  Last fall I bought a large, thinking that it’d be nice to have a more parka-like Alpine Start.  Going up a size solved the neck issue, but also made the whole thing baggy and very much not to my liking.  So I sold the green large, and bought the current black medium, which aside from larger zipper pulls and the aforementioned neck dart I intend to leave unmodified.

Lastly, plenty of folks were curious how long the (very effective, when new) Nanosphere DWR would last.  Just this afternoon I retested my original shirt, and can say that Nanosphere does indeed wear out.  When I reviewed the original after a few months of use four ounces of water hardly leaked through the fabric during the cup test, even after two hours.  After 2+ years of use all four ounces leaked through in just over five minutes, while my new coat next to it held all the water in suspension for the full two hours, save a few drops.

So nothing lasts forever, though I still count the Alpine Start as money well spent, and would not be without one, for just about anything outside.