Boaters, fisherfolks, and anyone interested in the subtleties of US public land law will know that stream access laws in the western US vary enormously from state to state.  It is worth considering, especially in the age when the “non-consumptive” side of the outdoor industry is finally flexing political muscle, why the issue of stream access has enjoyed comparatively little publicity. 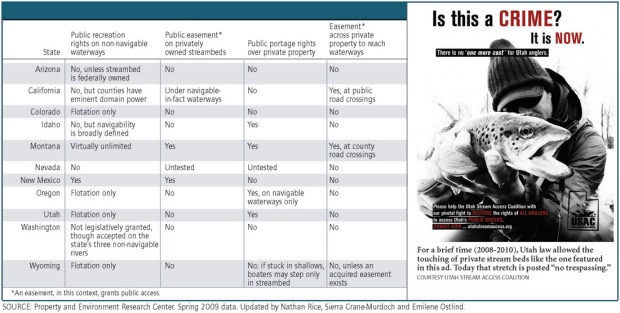 This chart was published in High Country News, and is as a good a single source of current information as any.  HCN is properly reknowned as a lefty, pro-public access publication.  What makes this chart noteworthy is that the information was pulled from the distinctly right-leaning PERC, who don’t bother to hide their bias but nonetheless have accurate information.  In short, Colorado is among the worst when it comes to recognizing public access.  Most egregiously, while the water in a stream is available for public use, where creeks and river pass over private land the riverbed is considered private.  Wade fishing, dropping an anchor, or even hitting a rock can all be construed as trespassing.

I’ve yet to see a compelling argument that such a stance does not conflict with federal law, in that the US Supreme Court has held that the public holds navigable waterways below the ordinary high water mark, and that “streams which are navigable in fact are navigable in law.”  Which is to say that the range of waterways available to the public is very broad indeed, to the point that even the progressive Montana stream access law is not as extensive as it could be.  The only available conclusion, when it comes to Colorado, would seem to be that the state has made a deliberate choice to cater to (generally wealthy) landowners, persistently.

The logical follow-up from that is not why fly fishers are suing in an attempt to overturn Colorado’s law, but why the outdoor industry, as part of their general embrace of Colorado, has not put public pressure on the state to cut this crap out.  OR moved to Colorado for the foreseeable future, and it is almost easier to list the companies not based there.  Scott and Tenkara USA are worth noting, in the fishing realm, along with conglomerates like Exxel Outdoors (Sierra Designs, Ultimate Direction) and private companies like Big Agnes, and yes, Alpacka Raft.  The Packraft Roundup is being held in western Colorado this year, logical due to the proximity to so many more potential floaters and customers, less logical when it comes to the range of waterways and yes, the politics.

One answer is that many of the higher ups in these companies probably have no clue about the state of stream access, in their state and in others.  Last winter I had multiple folks, longish time Colorado residents and visible presences in the outdoor industry, try to convince me that their state did not have an extensive history of being hostile to floaters.   The other is that the outdoor industry, for all their new found piety in public lands advocacy, still defaults to the position of their most prominent association, who in turns lists as one of its most prominent accomplishments defeating an excise tax which would have brought about one of the largest increases in conservation funding in US history.  Pushing back against a nutbag president via telegenic national monuments is one thing; taking a stand closer to home is more difficult.

Perhaps it is time for the outdoor industry, and those whose days and dollars allow it to exist, to put the squeeze on Colorado (and other states) until its public behavior is a little more consistent?