A procrastinator like his mother, he was almost a full week late, which was not entirely welcome during a summer which was unrelentingly hot, in a state where almost no one (us included) has air conditioning. So it was a relief Sunday afternoon when contractions became intense and regular enough for me to insist we go to the hospital, and after an intense 14 hour night he came into the world with all parts where they should be, healthy and just shy of 9 pounds.

And on his mother’s birthday.

I hesitate to do so because she’s a modest woman and I quite lack the terms to do so properly, but I must brag for the extraordinarily calm (and drug free) way she labored and gave birth.  During and after she thought the nurses were merely flattering as they kept lauding her stoicism, but she earned every word.  (I want to add that anyone who could have been inside my head would not have called me calm, or stoic, or zen, or thought me in control of anything…  labor was not calm for me, only I didn’t raise my voice much, so everyone else thought I was calm – M)  Sometime between 4 and 5 in the morning, in the whirlpool tub, right when labor was really earning its name, M started falling asleep, grabbing 20-40 second naps between contractions.  No one noticed besides me, and even that took me a while, but once I got there the analogy between her intractable situation and the sleep walking, biking, and rafting I’ve done during things likes the Kokopelli Trail race and Wilderness Classic was immediate and logical.  If the only way out is through you might as well grab what little respite is on offer.

The first night home was, naturally, full of terror.  After a few days and the realization that we probably weren’t going to kill him, or he us, things got more relaxed.  Thankfully he’s been a fairly good sleeper from the very beginning, and the weeks since have been tiring, but sustainable.

Together we’ve changed around 500 diapers, conservatively.  Aside from the repetition, I’ve yet to see why this is a big deal.  Breast-fed poop is after all both infrequent and easy to clean up and off, and the faces which accompany infant farting and crapping are as funny as anything else on earth.

Adapting our daily routine has occasionally been challenging, especially given the impressive hourly total he spends feeding each day, which I vastly underestimated.  We’re quiet people, which suits a baby well, but we’ve had to stretch our patience and admit that all three of us are short on energy these days, and a 4 mile hike can be a physical and logistical challenge.

Time at home has been precious, which is convenient, as we’ve spent more weekend time on the couch in the past four months as in the previous four plus years.  It is easier for me to say that, not being the food source and thus being free from the profound and immediate demands which go along with that.  No matter how many diapers I change, walks I take him on, and spit bubbles I clean there’s an inherent asymmetry about which little can be done.  Often my duties are like the one I’m doing now, rocking him with my left foot, occasionally tickling him with my left hand, and trying to not make too many errors as I type and watch him flail and gurgle happily.  Simple stuff compared to 45 minute feedings at 2 in the morning. 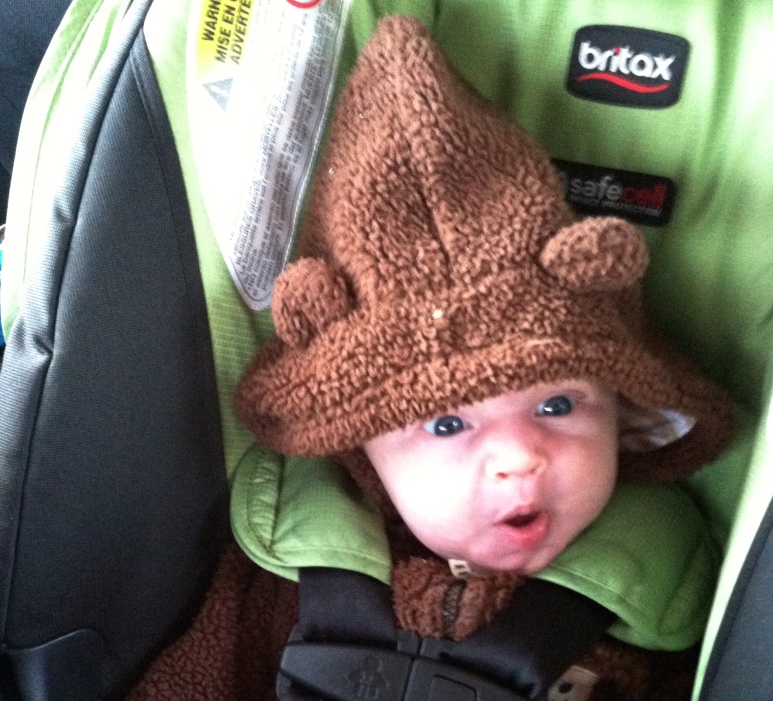 In the grand scheme of parenting this is simple stuff.  When he cries he wants one of four things, and while rocking, feeding, changing, and adding or removing clothes and blankets might be inconvenient, it’s never especially complicated.  Today he can grab my thumbs with both hands and hold on strong enough that I can lift most of his body off the floor, something which is only a week old.  As neural pathways grow at blinding speed so too will our jobs as parents.  Fortunately we chose each other well, and are ready.