As you may have heard, we had a lot of fires this summer. At first the Reynolds Creek fire in Glacier was merely a curiosity; it didn’t disturb any plans we had, and was a novel alteration in a landscape we loved.

Then the big lightning storm blew in the second week of August, hundreds of fires sprouted across Washington, Idaho, and Montana, and hot winds blew not a few into legitimate conflagrations. Suddenly we were living in a haze.

Compare the above photo of Bowman Lake, from the every end of August, to this one from December of 2010.  Not appealing and, for an infant, not healthy.

Thankfully temperatures dropped just enough 10 days ago, and just enough rain fell, to clear things right in time for a lookout trip with auntie Joslyn.  She brought her ear plugs, but they weren’t enough.

The whole short saga has been a timely reminder that the quality and clearness of space around here is the most valuable thing, by far.

Crisp air that goes for miles and stings nostrils even at the tail of summer.  Rivers whose headwaters set the world standard for purity.  Green valleys marching out of sight, all of them free of human habitation. 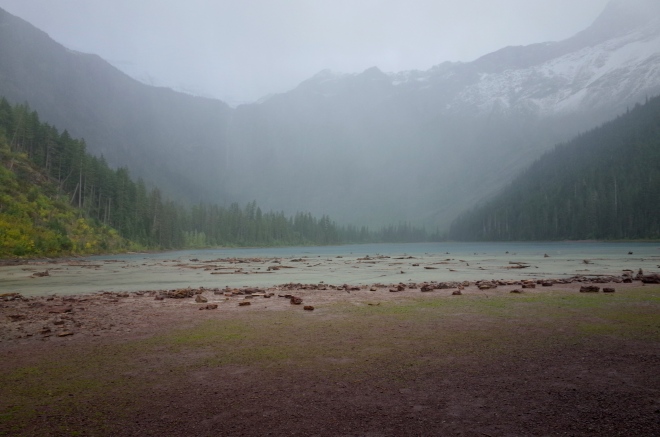 So when cold rain rolled in yesterday evening and forced a breastfeeding family of us to go hide under the trees, no complaints were uttered.