And I’m tired. So, by the numbers:

Friday
Double back numerous times to get things I forgot. Camped at the KMC site.

Saturday
Woke up eeaarly. It was damn cold. Visited The Mean Bean, and said hello to (ex)owner Joe for perhaps the last time. They’re moving to Boise. Hope the coffee stays good. Met Steve and Chuck. Little Creek in the AM, bb change for Steve, JEM-Goulds-Hurricane Rim in the PM. Hotel Hot tubbin’.

Sunday
Drive to Bryce. AM photo time in Zion. Cassidy (I break a chain)-Lossee-Casto-Cassidy (Chuck breaks a crank)-Rich (remeet the Oregon boys after a crank swap)-bike path-Thunder Mountain. 43 miles above 7.5k. Pizza and camping in Escalante.

Monday
Loma. Mary’s-Horsethief-Steve’s-Lion’s-Mack Ridge-Moore Fun (for me). Down MF with less than six unclips on the SS. Pretty good for me.

Tuesday
Everything at 18 road. 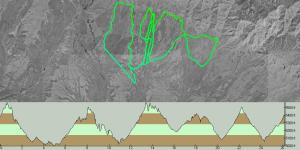 Wednesday
Lunch Loops and the Ribbon. We rode from the Tab TH, up the road into a nice brisk headwind, then down the brake burner. Had a nice balletic crash when I clipped a boulder with my left hand on Holy Cross. Not sure what happened, hit my knee and did a dance with the bike, ending still upright, but fifty feet downslope. The GPS turned off then, too. 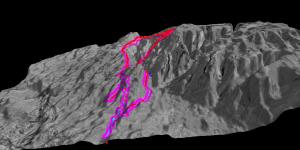 That evening we feasted at the Hot Tomato, then I headed out and drove to Dewey Bridge. Not damaged than I thought. Pictures coming, once I get it off film.

Thursday
The OR crew took an easy day. I met up with Fred, Pete, and Craig to hit the trails that dare not speak their name. No GPS files today, just lots of sweet technical riding, and my second rear pinch flat of the trip. Nano on Open Pro @ 30 psi?! I must be going faster.

Finished the day down the Portal, then back up the old highway. Life was gooooood!

Friday
Easy day. Shuttle day. Kokopelli down on Porc Rim. Fun. Tainted a wee bit by the lack of earning, but I was ok with that. The lowest Porc singletrack seemed exponentially more rideable than ever before.

Only downside: pulling into Maverick to stock up on Twizzlers, the drivers window refuses to roll up. Uhhhhh…… shit. Not much to be done. 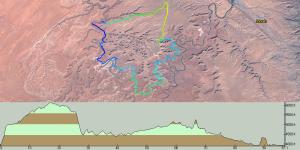 Batts died ~3 miles from the end.

Nice brisk early May weather. Made it up Mineral in one go, a few hours later chatting with the bike ranger (!) at Musselman, I see a familiar black bike approaching. Fred, with a huge pack of goodies, had ridden out from his house. Now we had a happy crew rolling along.

Socializing (and a farewell trip) aside, this was a perfect training outing before a certain race. And being obligated to do it all on the SS was a blessing unplanned. And on White Rim I felt strong. All but the nasty steep and chalky bits of Murphy’s, and all but ~40 feet of Hardscrabble. 98% percent power (like, 15 rpm power!) at mile 85, after this week?! I’ll take it.

Sooner or later, we were done. Easy. Sorta. I was done too. Nothing was stolen from my open truck, and Fred showed his mortality by taking a ride home for only a 100 mile day. Steve and Chuck headed off for their enduro drive through the night, and I decided to not freeze driving south, and instead crashed at Fred’s.

Crazy. Dead. The bottom dropped out once stationary, and all I could do was eat my frostie and stare at the wall.

Sunday
Up with the sun (camping!), and off. I spent the whole drive from Moab to Kayenta wearing my sweatshirt, hat, and goretex jacket. Blah. Then, messing with the window switch, it goes up 4 inches! Another ten minutes of messing and it’s up all the way. And staying that way for quite a while.

The rest of the day has been reacquainting myself with my lovely, and short haired wife, eating and drinking. And resting.