Skip to content
Back in April, I put together a pack almost from scratch, which was to be an all sport and all conditions multi-day and/or technical pack. It still represents my finest design and sewing work to date. Although the larger canvas makes execution a lot easier than with frame packs or clothing.
It’s been on two backpacking trips and a bunch of day training and testing stuff since, and the other week I pulled a few seams apart to make some tweaks.
The beavertail flaps top buckle got moved lower down, and the pocket itself shortened.
The extension collar got shortened.
The lower drawcord where the orange silnylon met the ballistics was done away with.
I removed the internal pad sleeve entirely.
I moved the load lifter attachment down almost two inches.
I took in the back panel seams above the shoulder harness, thus reducing the overall circumference of the top part of the packbag and biasing the weight closer to my shoulders.
All that said, things still just weren’t quite right.
Over the summer I became a devotee of placing a rolled up foam mat inside the pack, letting it unfurl, then stuffing all contents inside it like a burrito. It provides great structure and load control, and another layer of insulation against abrasion (useful in canyoneering and bushwacking). The pad I had been using was a rather stiff, generic bit of 48″ by 21.5″ by 5/8″ foam.
Yesterday I bought a short (48″ by 20″) Ridgerest, and the pack was transformed. The Ridgerest provides the exactly right balance of structure and flexibility. It allows better use of the compression straps, and does a much better job of hugging my back.

It’s very interesting comparing the above with the pictures from the earlier post. I can’t wait to take this thing ski touring. I’m actually hatching a January (pre Camp Lynda, ideally) trip that will fulfill my long time ambition to do the Narrows in the dead of winter, with some flair added.
I’ll get dropped off on Highway 14 a bit above 9000′, ski through the lovely aspens along the east side of Black Mountain, descend down west of Aspen Lake and enter Deep Creek right above O’Neill Gulch. Then take the skis and ski boots off, put the drysuit and neo socks on, and tromp down Deep Creek. Camp somewhere, and finish up down the Narrows, carrying skis to the Temple bus stop.
You’d need touring skis, boots, poles (for both sections), drysuit etc, and likely instep crampons. Should be a hoot.

In any case, I was sufficiently pleased with my design that I went down to the basement this morning and made it all permanent by seam sealing all the major seams and bar tacks. I like the liquidy, REI brand seam sealer for this job. Lends both durability and a bit of waterproofness. 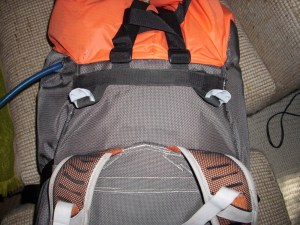 The whole pack, including the removable snack pouch on the belt, weighs 20 oz. on the nose (without the 8.5 oz Ridgerest). Not bad for a pack made of 16 oz/yard fabric, with a double bottom and 3/4″ grommets for draining. I’m quite confident in it’s overkilledness. Its already been hung as a bearbag.
Hydration port, a mandatory feature. As efficient as using bottles and constantly refilling in streams is around here, I like hoses more.

One benefit of the beavertail pocket (pulled, as Eric noted many moons ago, from the Dana Designs packs) is that it makes packing a bike workable. Pull all the straps, put the seat tube in the bottom of the pocket, lay the pocket around the frame and cinch down all the straps. Driveside out, right pedal up and next to the pack, an extra strap holding the fork to the triangle so it’s immobile. Wheels off and strapped on after. I may be putting this feature to a more exhaustive test than I care to contemplate soon.
Gets me thinking about a lighter SS frame for easier carrying. 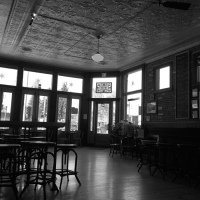