Shoes, my unending obsession.  M and I have an ongoing debate over who is more discerning, her and her heels or me and my trail runners.  I obviously think the labor of 30+ mile days dwarfs bizarre fashion artifacts, however anatomically barbaric. 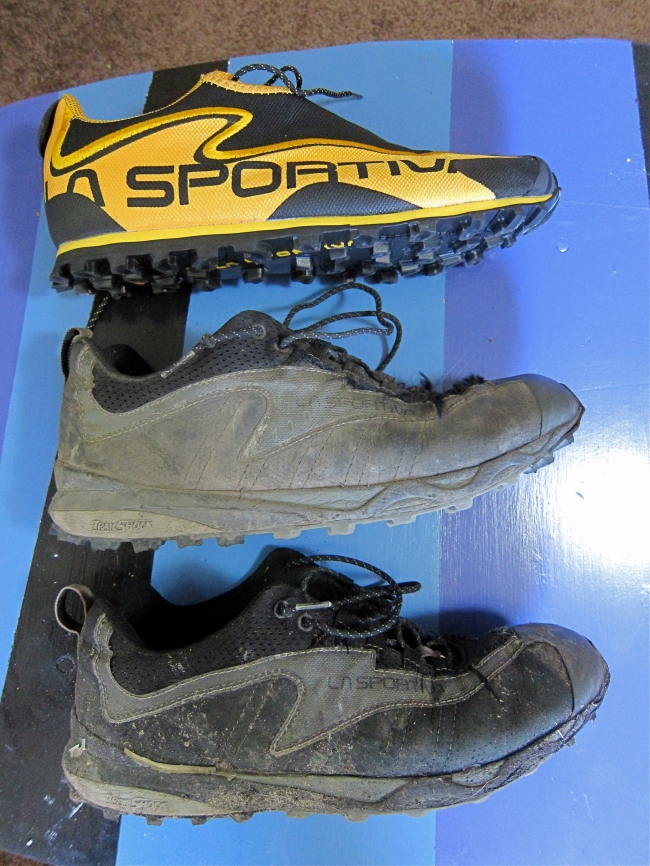 I’ll always be searching for the perfect trail shoe.  Late model LaSportiva’s have worked well for me over the last three years.  The Fireblade was good, though the heel was a bit too wide and the traction wasn’t good in mud or loose stuff.  The Crosslite was awesome, but I got holes in the outer toebox inside 50 miles, and returned them to REI for the above pair of Crossleathers.  The uppers, as can be seen, are in great shape.  Problem is the shoe is heavy and drains and drys really slow.

All this, and my growing interest in minimalist shoes, had me very excited when the X Country came out.  As soon as some gear sales brought in funds, I got some (sorry Paige, should’ve taken your offer last month).

As is obvious, they’re lower, have less delta, and less cushion than the Crossleather/lite.  The upper is one piece of burly-looking mesh, which I hope hits the holy grail of draining fast and outlasting the tread. 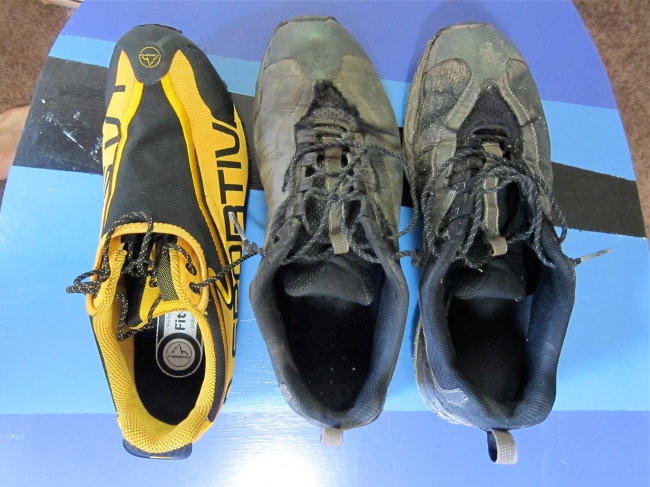 I find the fit identical in the heel and through the midfoot, which for me is perfect.  The X Country doesn’t have the modest arch support of the Crossleather (which I at first corrected (in the rightmost pair) by cutting up the insole, and later fixed better (middle pair) by putting in an Inov8 insole).  The photo doesn’t show it too well, but the toebox seems to be less pointy, with a bit more room on the outside.  I never had a problem with the Crossleather, but more room here cannot be anything but a benefit.  The inside of the toebox still treads the line between being wide enough for swelling feet, but narrow enough for technical edging work on rugged terrain.  As has been noted, this is important, as minimalist shoes don’t have sole structure to provide support when kicking steps in snow or negotiating steep rock, turf, and scree.  Your foot muscles have to do that, and the toebox, especially the inside edge, can’t be too floppy, or it just doesn’t work. 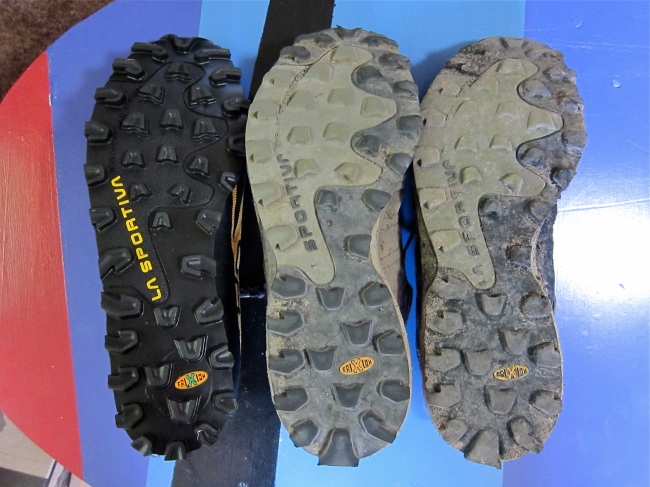 The sole is a close variation of the same outstanding tread used on the ‘leather.  The rubber is sticky, but reasonably durable.  The rightmost pair have a ton of miles on them.  The middle pair do too, but as is obvious all the talus, moraine, tundra, and brush (to say nothing of glacial silt) aged the shoes in a frighteningly efficient manner.  7 weeks old!

I’m excited to get these out, see how they perform, hold up, and further see just how minimal a shoe for fast and rugged wilderness travel can get.  I have no doubt that shoes with less structure have allowed my feet to work better and thus hike further, faster with less fatigue and pain.  But at what point, if any, is a bit less support and protection too little?  I aim to find out.