Since I really became reinterested in backpacking a few years ago, I’ve the majority of my trips solo. Convenience, ambition, agoraphobia; all reasons why this has been the case, but as my pleasure in long distance backcountry travel has grown so too has my desire to share at least some of the incredible things I’ve been seeing recently. Obvious as it is, backpacking with others introduces another level of complication, and highlights the significant part of me that lacks patience. It’s simple to hike my own, easiest pace, and go through all the routines of camp without the burden of integrating anyone else. For a variety of reasons I ought to get better at this. 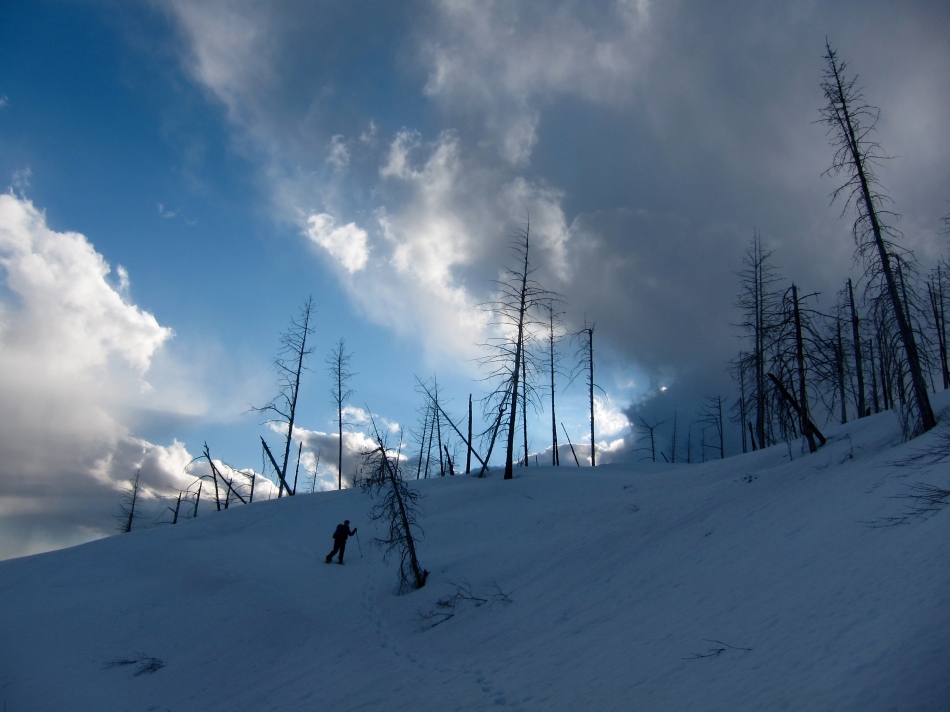 Clayton and I went backpacking this weekend.  Up to the Apgar lookout, with a scenic camp up high, then north along the ridge before cutting back east into the lowlands and a road walk to close the loop.  A smaller loop in a small range in a big park which only gets visited often for the trailed lookouts on either end.

The hike up Friday afternoon reminded us both that while the alpine snowpack may not be as far behind last years as our stochastic snowfall is apt to make us believe, the last three weeks of warmth have put the low elevations snowline in full retreat.  Unlike last year, where levels grew throughout April and well into May at most elevations, this year spring is behaving like it is supposed to.

My highlight of our trip was without question hanging out making dinner Friday night.  I’ve been up to the Apgar lookout, at the very southern tip of the range, on many occasions in every season, but I hadn’t seen it nearly as well as I did on this trip.  Maybe it had always been at least a bit foggy or overcast, but more likely I had never before taken enough time to really look.  At the time I estimated we could see 2/3s of the 50+ mile straightline sweep of Glacier.  In reality, from Saint Nick in the south to Rainbow, Numa and (I think) Kintla in the north, it’s even more than that.  To say nothing of the Swans, Whitefish range, and even all the way SW to Blacktail. 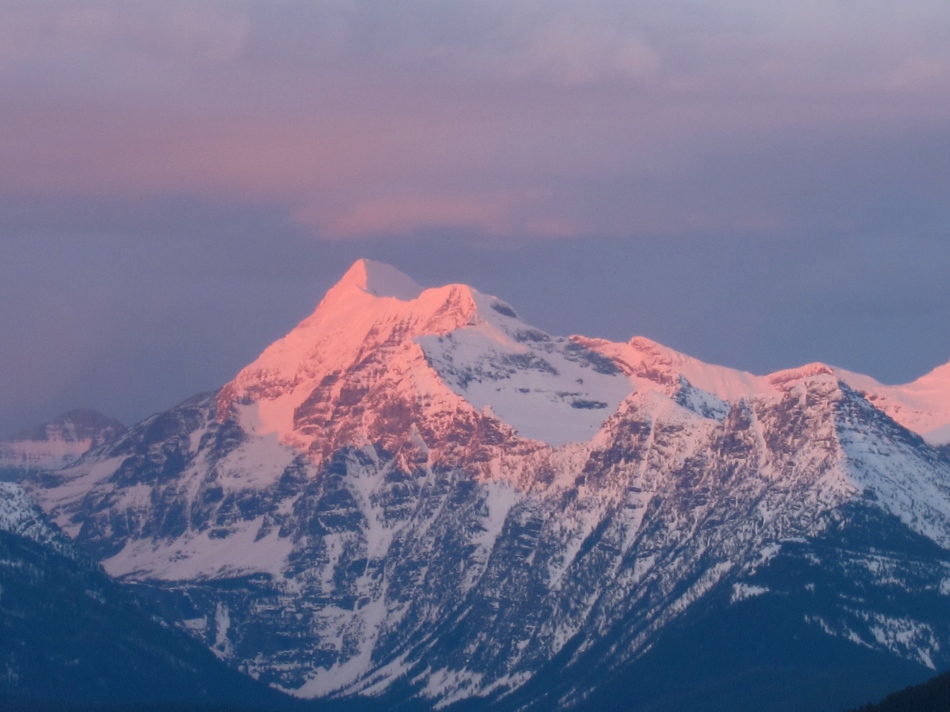 Mount Jackson, with the Lincoln Lake cirque at its base.

Pictures always fail, but that shouldn’t prevent you from trying. You keep speaking too, right, in spite of the continued absurdity that is verbal communication between humans?

The morning was just as spectacular, with a prolonged dawn we enjoyed while drinking coffee and melting snow, and hard frozen crust making for fast and snowshoe free travel conditions.

It did become obvious soon that if we wanted to travel over the bigger subpeaks and steeper ridges crampons and ice axes would be a good idea. We didn’t have them, and while it was easy to stroll along the ridges gawking, and the snow usually gave just enough bite on bare rubber, one slip in the wrong place could have led to a high-speed pinball through the abundant standing deadfall. 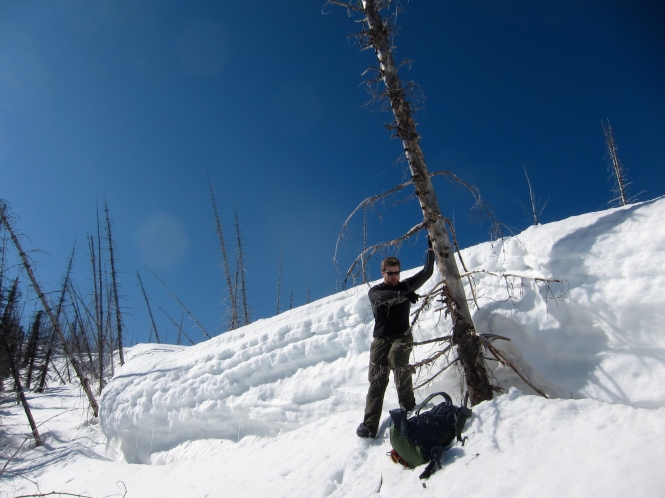 Using a tree to get down the mini-cornice.

The views continue to astound and preoccupy as they developed.

Our route of retreat was conveniently sun-exposed, which soon led to an outstanding glissade down to the flats. 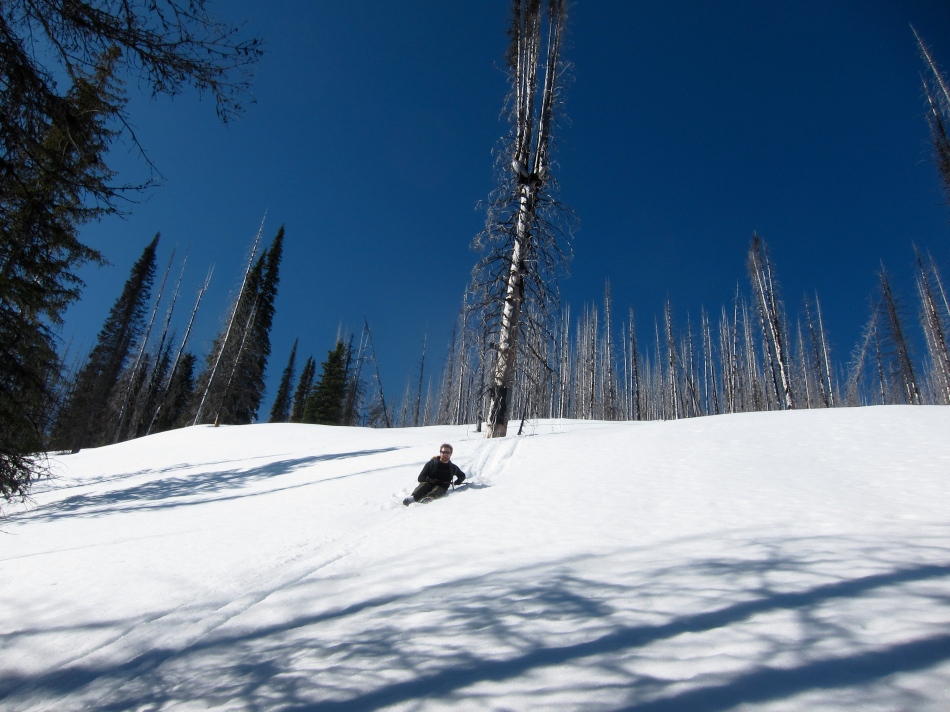 At the point we stopped sliding and put on snowshoes, we were perhaps 1.5 miles from the paved road. Why don’t more people do this hike? Or ski the fantastic lines off the ridge?

Because that stretch took us two hours. Most of the Apgar Range burnt well in 2003, and the detritus is still to be feared.  The first part still had a decent bit of snow, and thus the main hazard was merely dodging trap doors in the snow laid by deadfall (which acts as a heat sink and melts out beneath the surface).

The second part had too little snow to cover the brush and deadfall, thus demanding snowshoes off and a combination of balancing across accessible, sound logs and hopeful steps across clear patches of snow, waiting to break through.  On a few, tragi-comic occasions I looked back at Clayton, only to have him instantly disappear as snow collapsed and he dropped 2-3 feet.  Making it through this stuff with minimal blood and no sprained limbs or holes in gear absolutely counts as success.

It’s also really good training for tougher alpine hikes this summer.  As a bonus, the Camas Road is plowed clear but still closed to cars.  I laid down and soaked up the sun above and warm pavement below, realizing only in retrospect I was fortunate to not be run over by a cyclist.  Fortunately, Clayton had thought to arrange a shuttle the day before, so we had only a 10 minute victory stroll before us.

I could hardly be more pleased with the previous three weekends, and this one is not yet over.

Backpacking
← Why i might be full of shit
→ Trailstar v. Shangrila 2