Touring is a word which, as applied to skiing, has ceased to have much meaning. Everything from a 14 day traverse to an afternoon skinning off the lifts is touring. One, this is silly. Two, it reinforces groomed activities as skiing’s default. I prefer to restrict touring to when I’m actually going somewhere, when the purpose of the outing is not just to ski, but to see stuff. 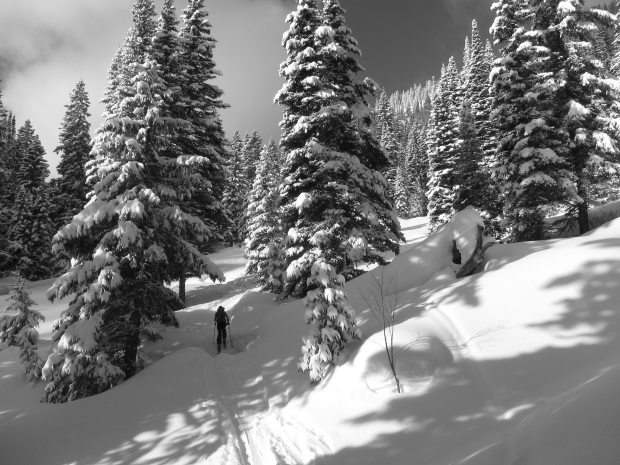 This was a tour by default.

Across the lake. We were all alone by then.

Recent weather had been a mixed blessing. Lots of snow had fallen, but the precipitous temperature drop which had brought it encouraged a poor bond with the icy crusts onto which it fell. On any wind-loaded aspect we saw abundant small, natural, slab releases.

And the skiing was superb.  Just steep enough to be both fun and safe.

Dropping south into the unknown, we found more great snow and terrain.

From there it was a matter of slipping out the trail down to the road, and skating back to the lodge for a beer.  It was the complete backcountry skiing experience.

Skiing is a fickle creature.  While days like this one convince you (or at least me) that you’re actually a decent skier and that the whole thing is worthwhile, there will also be another day, and soon, when conditions don’t get matched with destination, skills take a holiday, and the frustration is endless.  Not infrequently do I think about selling my AT gear and retiring to nordic skiing for ever.

The reason I don’t, and likely won’t, is that backcountry skiing is probably the ultimate incarnation of human-powered backcountry travel.  The learning curve is steep and the skill barrier is extensive and multi-faceted.  All of which guarantees rich satisfaction provided you have the patience to do it right.  The kinaesthetic rewards of good backcountry skiing are simply unmatched, it is not possible to have a more gleefully free yet intimate experience moving over the land.  Most significantly, backcountry skiing goes into the heart of the wild, when the least forgiving places are at their least hospitable.  The effort can be huge, and the safety concerns immense, and often unanswerable.  This has been the crux of my own frustration with the discipline; as never before have I accumulated so many hours out doing and still not felt well qualified to assess risk.  In backcountry skiing, the price for entry into the big places is sky high, at least it is for someone as cautious as I am.

So for the foreseeable future I resign myself to getting slowly better, growing towards the ever-present goal of having more and more places open to my skills and vision.