It started with the wind, and ended with tea. 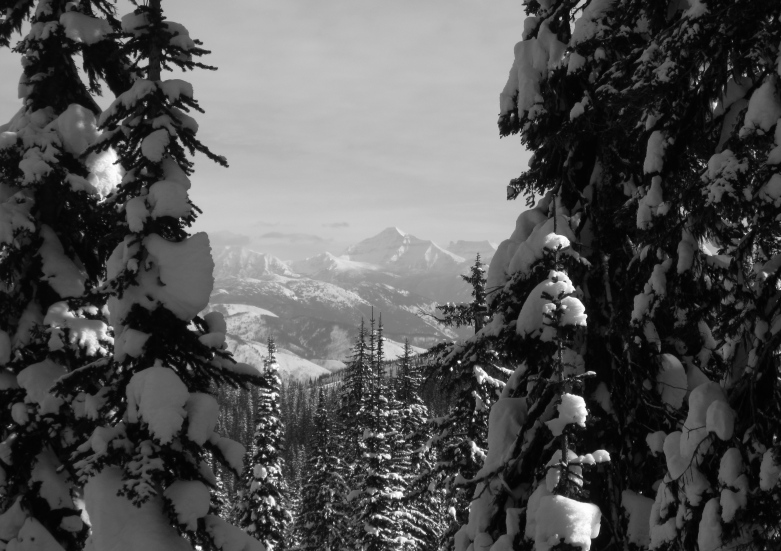 Walking the mile downtown in ski boots, early in the morning, was just as introduction.  I drank a macchiato in the coffeeshop, the slowest such in the valley, with all my gear leaning against the brick wall.  Amber arrived, and we caught the free bus up to the ski hill.

Lauren had texted about bailing on the day because of how windy it was, and looking up at our run of ascent while snow devils whirled across it, I could see what she meant.  It was indeed windy up there.  Not quite enough to make standing and skinning difficult, but enough to turn 5F and sunny into a potentially frostnipping, ball-freezing affair.

We convened at the summit house, got coffee, and chatted for an hour.  At 1000 the place was busy but not crowded, sun streaming in from the south-facing, full length windows.  Around here you do not take bluebird for granted between October and July.

We set off, secure in my assurances that our route would not poke too high up into, or too far out to, the wind’s territory.  The cold that had strafed us on the first ascent, growing frosted wisps across our faces in minutes, was unadulterated.  It was a finger of the jetstream hung low, a hint at how raw the atmosphere above, which keeps us safe, really is.  Much though I was longing for wind briefs in the last fifteen minutes, I love that wind.

We went down, to the edge of the ski area.  Up and out of it.  Across a ridge, following many tracks.  Down through the trees, to a small frozen lake, still surrounded by evidence of skiers not seen.  No wind down there, just dry snow like well sifted flour and sky of a blue you blush trying to describe.

An old skin track, covered in the last 10 days of wind-drifting and light snowfalls, led exactly where we wanted to go.  Soon enough we were perched above a new drainage amongst the snow ghosts, the wind light enough to be kind, but sharp enough to discourage lingering.

A few turns in and the lines opened up amongst the old growth pines.  With no tracks for distraction, my mind is free to ski where and when and how I want.  I milk momentum and at the bottom hop across the snowy divot that hides a creek, and take my skis off to reskin.  Three hours into the day, and we’re into a shining land whitewashed of human evidence. 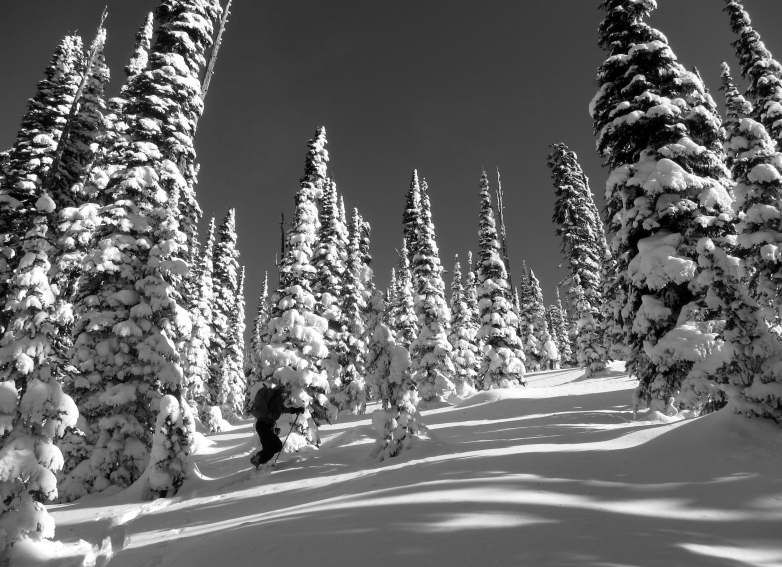 We leapfrog out toward the valley, taking a line over the finger-ridges designed to maximize elevation gain and loss.  On the ascent we’re just cool enough, thanks to the wind, that it’s easy to not sweet.  The descents continue to be dream perfect.  The angle is steep, but not intimidating or hazard-prone.  The trees shelter the snow and keep it undisturbed, but are spaced enough for fast passage and diverse line choice.  The wind rattles rime clumps in the tallest snags, some forgotten prayer bell crafted by alpine sprites.

On the third or fourth descent the face steepen and opened up at a roller.  I dodge the trigger point and, soaked through with confidence from the last month of good skiing, arc big turns.  Skiing as fast as I ever have to this point in the backcountry, I arc back left as my right ski hits a hidden snowmachine rut.  It releases cleanly, the plastic hook on my leash breaking, and I stay upright for a second before pitching slowly forward into a cartwheeling faceplant.  I come back up for air in time to see my ski fly past and hear it thunk into a tree a couple hundred feet below.  Thankfully, good snow makes skiing on one ski doable, and now, 17 hours after the fact, I only have a slight twing in my hip flexor for my trouble. 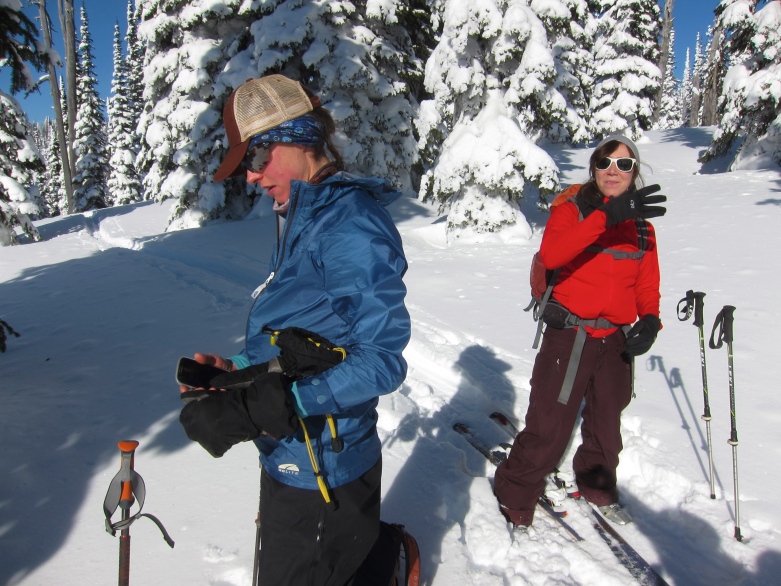 We packed some many moments into the previous two hours that I almost didn’t believe my watch.  Lauren thought we would be getting out early, and I warned her not to tempt fate.  Our exit strategy was based on a 3 mile jaunt along a snowmachine and groomed XC trail back to the ski area, and the bus.  Between our perch on the last ridge finger and said road was 1.2 miles of linear and the dreaded drop below 5000 feet, into the low snow and thick brush.

That exit proved to be neither better nor worse than I assumed it would be.  We made a bunch of quick, nervous turns, fearful of catching a tip.  Amber did some fantastic route finding around alder patches.  We gave up and booted for a while, then put skins back on.  Everyone face planted at least once.  I took a bad line across the creek and had to pry ice wads off the bottom of my boots so I could click back in.  At last, we hit a road, which went 100 yards to another road I’d walked up a few months back while grouse hunting.  A quick, 1/3 mile downhill coast over snowmachine and moose track brought us to the road proper, and the straightforward if mentally fatiguing and maddeningly always gently uphill trek back.  We only had to wait 15 minutes for the bus, which was predictably early (and did not wait).  We all now know why not many people ski that route, and Lauren knows why some people hesitate to go skiing or hiking with me.

The bus ride down was filled we gussied up Canadians, primed for a Saturday night and anxious to make their dinner reservations.  No one else was damp and still carrying skis.  We all went our separate ways, home for hot showers and dry cotton.  Lauren, M and I, suffering from the same state of limited tasty food in the house, met back up at the Chinese restaurant south of town, hidden in plain sight and reliably not busy.  Rice noodles, chile sauce, beef, shrimp, and lots of hot tea brought about a proper debriefing of a day not to be accurately measured in hours.  And then we went home and fell heavily asleep.

Now, muscles sore from insteps to triceps, happy in pajamas with hot coffee reclining on a white sofa, I’m glad to not be out there, in that harsh world.  But I want to be back, soon, and I envy the wind.