M and I got home a few hours ago from the APA Packraft Roundup, and even though it was early afternoon, we were both done in.

It has been hot the last few days; record breaking for northwest Montana, which means mid 90s. Good river weather, but being out in it all day for three days non-stop made it tough to stay un-jerkyfied. Drinking beer with new friends makes that process harder still. 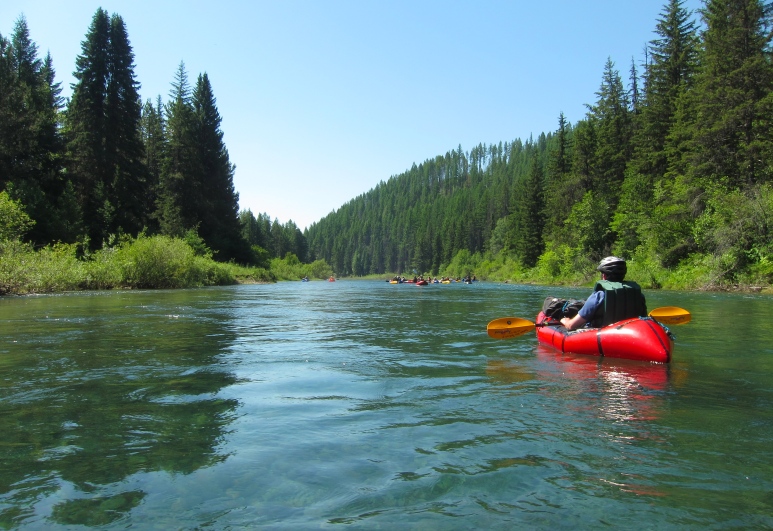 It was enormously rewarding to lead paddling groups on Saturday and Sunday.  Saturday we had 18 beginner paddlers out with three instructors on one of my favorite after-work routes: lower McDonald Creek to the confluence of the South and Middle Forks.  I believe around half of those 18 folks had never been in a packraft more than a few times before, if that.  Everyone learned well enough, and was in high enough spirits, that we kept the whole gaggle of 20 boats and 21 people together all day.  Seeing so many bright little craft bobbing over the waves of the Middle Fork, and then a train of a dozen hikers with paddles and PFDs on the hike back to the circle bridge, is a joy I cannot yet elucidate.

Sunday was quite different, but just as satisfying.  Mike from American Rivers, as well as John and Matt from Tasmania, joined me on a favorite hiking and paddling loop up in the North Fork.  John had given a very impressive slideshow the night before of the exceptionally remote and rugged trips he and Matt have done in western Tasmania over the last decade, and as we were starting out it occurred to me that I had the thinnest paddling resume in the group.  The terrain was all new to the three of them, and it was fantastic to see such new and unalloyed appreciation for a lovely but subtle and obscure patch of terrain.  When it came time to float we negotiated the smallish, fast and woody creek in seamless form, dispensing with a few portages and strategic ducks under strainers easily and with great humor.  Taking a group on a new to them 25 mile loop, and making it seem easy after getting an 11am start, is a rare and beautiful thing.  We undid all that ease with a lot of beer afterwards, but it was all in the service of meeting members of the still thing and far-flung band of packrafters.

I’m headed back to work tomorrow, while a bunch of folks are headed out in to the Bob with rafts in tow.  The enthusiasm is quite infectious.

11 responses to “The First Packraft Roundup”