After spending a certain amount of time outside coherent rules emerge.  Erosion shapes the land in a defined manner, and one can generally predict what is going to happen downstream and downhill.

The slot canyons of the Colorado Plateau redefine, or perhaps enrich and ensubtle, the rules of the land and how they work.  Just because a canyon widens, for example, does not mean it will not pinch back down later on, perhaps drastically so.  The Middle Fork of Leprechaun, shown here, is not even a particularly severe example of this.  Drainages in similar rock, but with faster catchments and therefore steeper gradients, can repeatedly flare and contract drastically, creating scary downclimbs many times taller than those shown above right before even tighter tight sections, ones no human can fit through, requiring scary and technical upclimbs.  It’s a phenomenon which has to be seen to be understood, or even believed.

There is rarely any life in these slots, save bird droppings, a few insects, and the occasional dead mammal.  In slots I’ve had to climb past dead raccoons, porcupines, and deer.  In this very canyon, 13 years ago, a friend became the only person I’ve known to be stung by a scorpion, and in a neighboring drainage I had to shoulder shuffle through a 100 yard slant with hundreds of spiders 4 inches from my nose.

Because of this, they are very quiet places, even on a windy and cold day like yesterday.  There are plenty of Youtubes on Middle Lep, but the fast-forwards and music don’t really do the place credit.  It’s not as severe as some, but it is every bit as brutal as a GoPro makes it out to be.  And for that reason, it is an ideal gear, and fitness, testing arena. 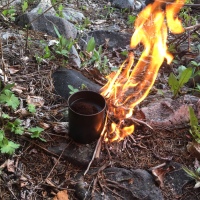