The familiarity of Safeway is comforting, insofar as finding oranges and beer and granola bars in the same place sands down differences east west and south.  But difference cannot be completely hidden; produce in Montana is generally expensive and often poor, and last week when I wandered through the store in Spearfish, SD fogged by the need for second breakfast, I was shocked awake by the distinctive orange font of Bell’s Two-Hearted Ale.  One of my all time, long time favorites, prominently not sold in Montana. 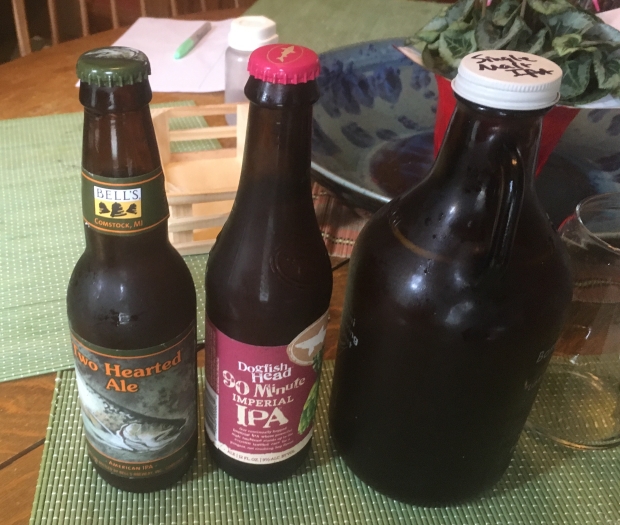 My coming of legal drinking age coincided with the craft brewery scene in the US really taking off, and thus my tastes have evolved and consolidated along with greater variety available in grocery stores, and more and better local breweries everywhere we’ve lived.  A dozen years ago Prescott Brewery Company was still a novel experience.  Today not having a local micro would be notable, and here in Helena we have five local options, though we still PBCs superlative fish and chips.

That said, as I documented during last years father’s day brewery tour, local beer in the western US is still profoundly uneven, a polite way of saying bad.  An inevitable product of population density and time lag, but that last (and only) occasion I visited the Bell’s mothership in Michigan not quite a decade ago was a potent reminder that their beers were significantly more polished and consistent (e.g. better) than anything available in Missoula or the Flathead at the same time.

This has begun to change.  Kettlehouses Double Haul IPA remains rather one dimensional (as do many west coast IPAs), but it is no longer the puckeringly unbalanced swill it was in 2008.  The Flathead has at least three quality (in some ways superlative) breweries to counter the horrid tourist trap which is Great Northern Brewing.  And here in Helena we have one of the oldest, and best, breweries in Montana, Blackfoot.  Blackfoots flagship Single Malt IPA has long been the touchstone for both balanced and sophisticated IPAs, and for Montana microbrews generally.  Blackfoot doesn’t bottle or can, but you can get Single Malt on tap in a big enough range of stores (e.g. Mackenzie River Pizza) that it can and has garnered a regional following.  When I brought a few bottles of both Two-Hearted Ale and Dogfish 90 Minute home last week, doing a blind taste test against Single Malt was their natural use.

It would be difficult to summon more worthy competition.  90 Minute IPA has been called the best beer in America, albeit a long time ago, and perhaps more than any other beer has been responsible for normalizing hop-forwardness.  It’s role in US beer history is worth reading about.  Two-Hearted Ale has been around almost as long, and if anything has enjoyed a more exalted and durable reputation.  It is both the IPA for no-hop fans and the mass-market micro even beer snobs cannot but adore.  That it is unapologetically hoppy, richly floral, as well as balanced and almost sessionable makes Two-Hearted the standard by which IPAs are judged.

For father’s day dinner I pitted a bottle each of Two-Hearted and 90 Minute against a growler of Single Malt.  Each bottle was well within sell-by date, and the growler had been filled at the Blackfoot taproom 24 hours before.  I was sober and well rested at the start, and sequed into a luxurious dinner 1/3 of the way through.  It was not a struggle to finish three excellent beers, though I was readily reminded that each is 7% or strong ABV.

Meredith poured into premarked glasses, recorded their contents, and was nicely implacable in the face of my speculation about which might be which.

From the first sip, and for the first third of each glass, C was quite different, while A and B were indistinguishable.  C was subtly darker in appearance, and significantly more coppery and earthy, with a crisp and edgier bite.  As the ~80 minutes wore on, the beer warmed, and my palate got fuller C took more effort to drink.  It took six strong sips until A and B began to separate themselves, with B keeping it’s initial mellowness, balancing the floral notes and bite in a way which A did not as the glasses emptied.  In the end all three beers remained enjoyable, but the hierarchy was clear; B, A, C.

A was Two-Hearted, B was Single Malt, and C was 90 Minute.

It’s not entirely fair to compare an Imperial IPA to two less burly beers, and my voting it to the bottom is likely as much about the setting (3 beers at once) and personal preference as anything.  Two Hearted and Single Mart are as identical and direct a comparison as possible, and both are outstanding.  Is my preference about the subtle ways Single Malt is better, or just about familiarity?  In either case, after this experiment I’m more happy than ever to have Blackfoot down the street, and to have so many good beers locally and regionally.