The other weekend we went to a cabin. It was off in the foothills down a snowy road, away from our (currently snowless) banana belt valley, along a creek that was high enough to have several feet of snow, and low enough to be forested and hidden from alpine harshness. The cabin was small, one room, with two sets of bunks and a table on one end, and a wood fired oven and wraparound counter on the other. Four wood chairs, two fairly comfortable, two emphatically not, fit into whatever corners were not in use. 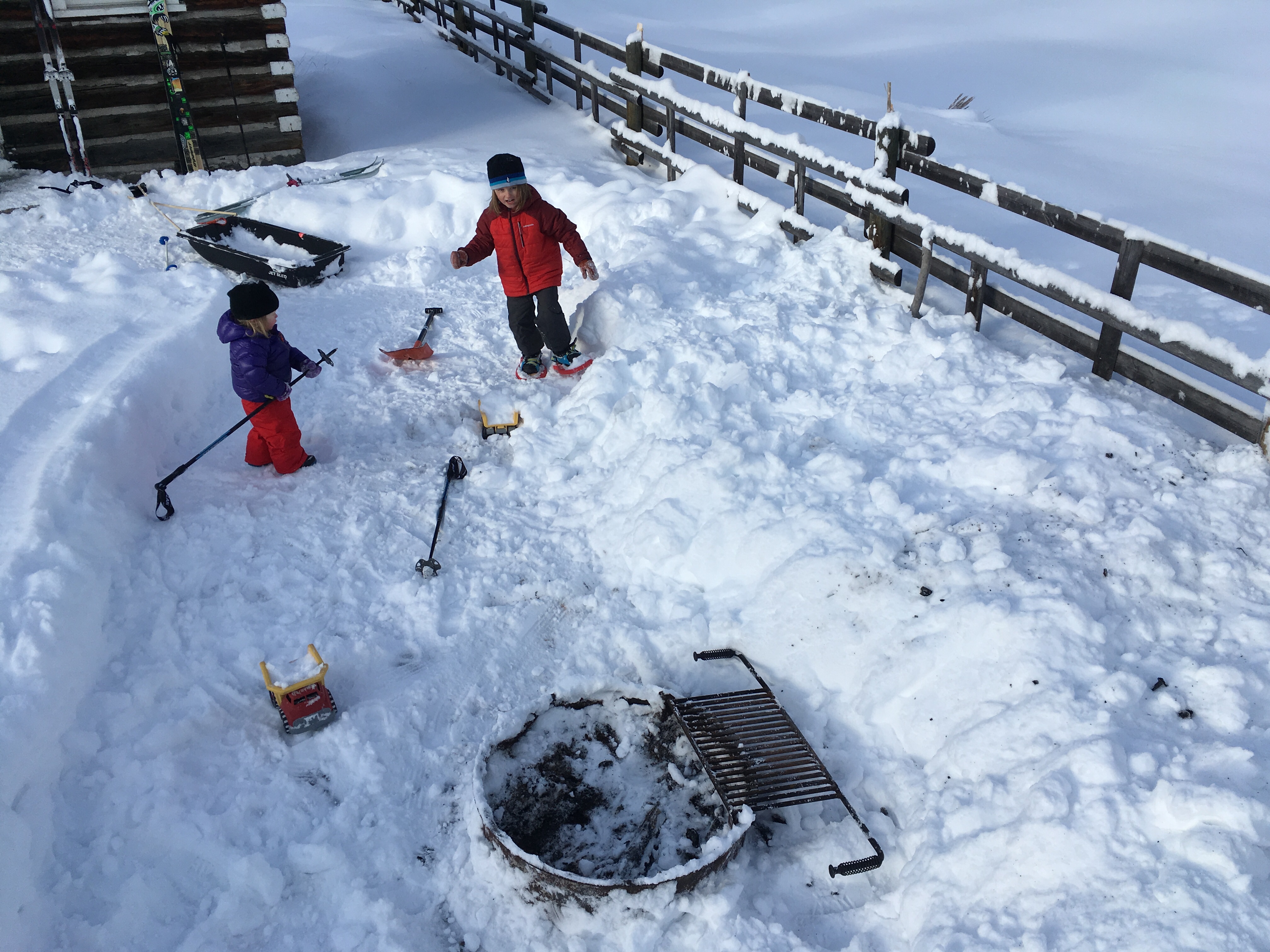 With the combination of kids and cabins and winter come complications.  The first happened immediately, with the short ski from the road being a bit longer than anticipated.  We have a big complicated sled, good for pulling both kids or a good amount of gear, which is stable and tracks in all conditions, but also has to ride on the roof.  For trips like this I built a smaller, lighter sled, which can also hold two kids, but is less stable.  Facing a longer haul in, we overloaded the small sled, and struggled with it diagonaling into the snow and loosing cargo, or dumping snow onto the toddler.  It took 4 trips, but everyone and everything made it to the cabin.

Another complication is that small people really struggle in deep snow.  Little Bear got off easy, spending his second winter in the desert.  Little Cloud has thus far gotten off easy, with his second winter being (thus far) an unusually dry and warm one.  But with two feet of snow around the cabin, an early priority was to dig out a play area in the yard.  After that, an avy shovel, toy dumptrucks, and sticks made for hours of entertainment over the days.

Extensive outside time correlates directly with the other complication of kids and cabins; the interior is small and features things like a very hot wood stove.  We can expect the small people to be safe in such an environment, but only with proper supervision and when properly tired out.

No running in the cabin.

Kids and cabins have a few important virtues, which cannot be separated from the complications.  Small spaces make for a premium on self control, a fungible and crucial resource when you are 4.  Living outside, in a snowy winter, emphasizes simple things like heat.  The kids in turn remind us big people how vital and disconcerting learning about the implacable world surely was back then.  Postholing, for instance, is a cruel thing, when you first encounter how nature has flipped the switch on something that was previously so basic and immutable.  Postholing and trail breaking were done, along with lots of crying, and several protracted mid-trail sit-ins by the toddler, for whom being excluded was always the worst option, no matter how cold and snowy the path.

No significant injuries were accrued, though each kid had a close call.  The Cloud tipped a chair peering too ardently over the back, just not heading into the stove, while the Bear got after it breaking firewood off a downed Doug Fir, and got a bloody lip for his trouble courtesy a rebounding branch.  We the parents got interrupted sleep, to stoke the fire at 0200 and keep the squirming toddler from bailing off the bed. 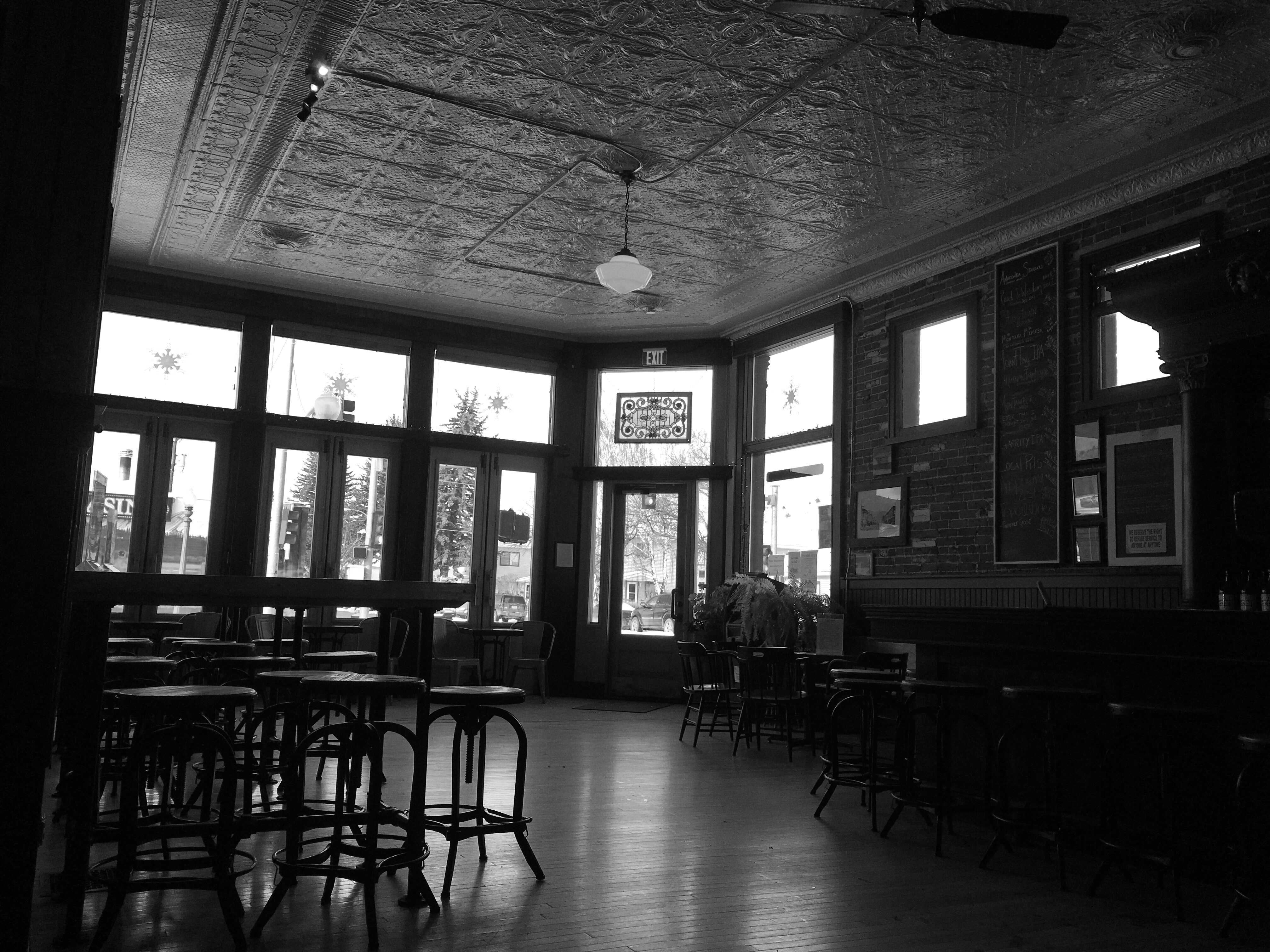 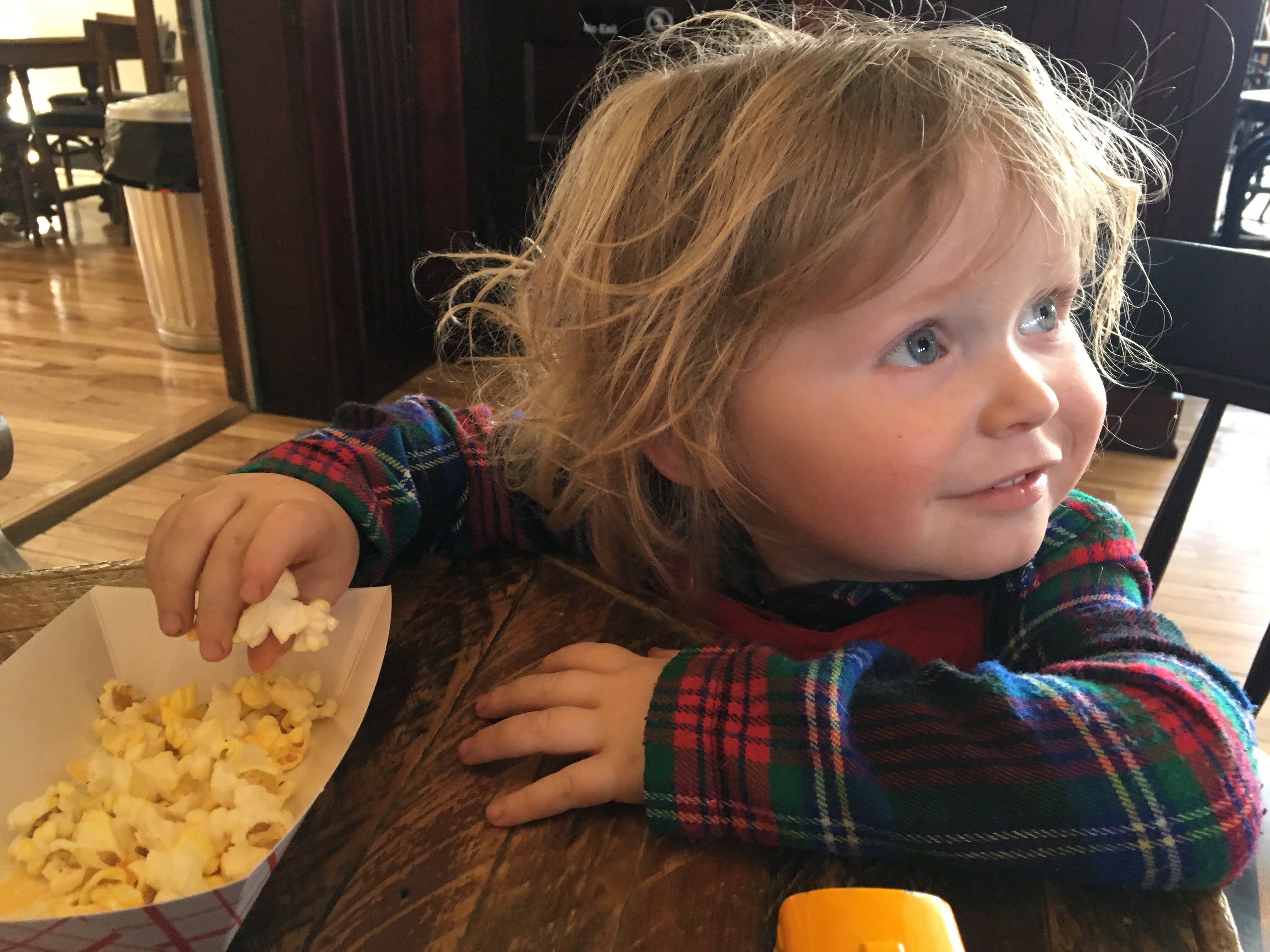 For us civilized folks, big and small, returning to the land of electricity is always a treat after a few days of deprivation.  The sensation is embarrassingly indulgent, and always gets this parent thinking how well we’d do without central heat or indoor plumbing (M, rather more prone to cold, has other ideas).  The small people have no such self-consciousness, and can enjoy hauling firewood in the snow and popcorn in a brewery equally and without navel gazing.

In the process we discovered a new favorite place, both for exceptional, restored 19th century decor and excellent beer, Smelter City Brewing in Anaconda.  Their porter jumped straight to my top 3 of Montana microbrews.  All the better reason to go back that direction soon.