I do love packs!  Always have.  I like feet too. 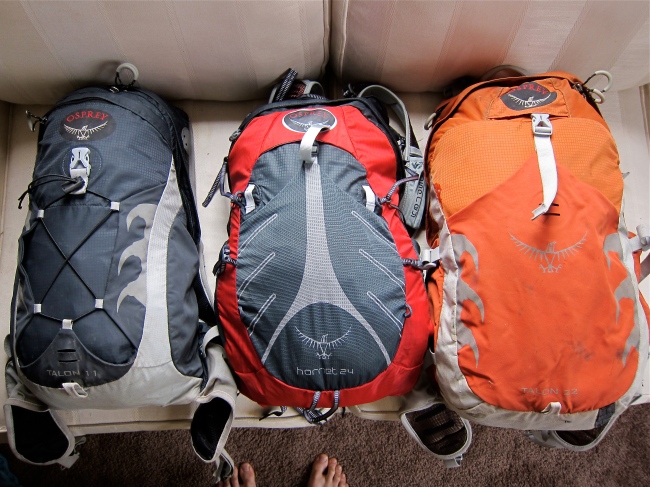 I got the 22 in early ’08, as that was what all the cool kids had.  It has done very well.  In the spring of 2009 I gave in to pack lust and got the 11, even though I strictly didn’t need it.  It’s proven faithful for day adventures, and generally a more frequently used size than the 22, though not big enough for overnights on foot or more gear intensive adventures (winter). 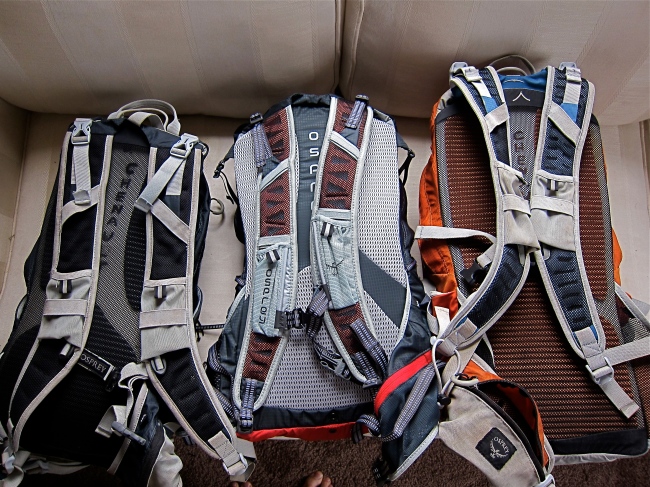 The 24 is brand new, on test for BPL (packs designed for active pursuits, 20-25 liters, claimed at less than 600 grams; we found five).  It appears to be smaller than the 22, and might be, though based on stuffing both full of the same load of towels they are very close in size, closer than the photos make it seem.  It seems like an ideal amalgamation of the 11 and 22, with the best features of both.

-both the 11 and 24 have unpadded waist belt wings, I don’t think the padding in the 22’s does anything

-the 11 and 24 have a fixed shoulder yoke, for lightness and simplicity (folks much taller than 6′ might not like this so much)

-the 24 lacks the goofy inside wallet pockets, has thinner webbing, and is generally leaner

-the 24 has much better compression than both of the others.

Circa ’08 Talon 44 straps and yoke on my 22.  Thicker than the stock straps and with a solid center section that increases the carry comfort substantially.  Still thin like the stock ’07-’08 22 straps.

Hornet 24 straps.  Narrow, thick foam like the 44 straps, with a layer of 3D foam/mesh on the inside to spread the load.  Very nice indeed.

24 v. 22 hip belt comparo.  Note the refined design and smaller hardware and webbing on the 24.

First summary point: Osprey hit the nail on the head with the original Talon 22 concept, and I assume they’ve made bank on it.

Second summary point: the Hornet 24 is the next, substantially improved generation of the 22.

If you want to buy a used Talon 11 and 22, head over to the Bikepacking.net forums soon.