If you’ve gotten your diploma from Dawson-Pitamakan, get your degree from this off-trail sibling to the south. What follows is enough beta to still have an adventure on this fairly moderate, but still strenuous, loop.

Almost all photos by M, for reasons to be explained.

Begin by hiking the trail to Two Medicine Pass. Nice east side forest, vaguely stunted, and some nice streams and waterfalls on the way up. From the pass, an obvious goat/climbers trail leads up to the notch in the ridge at around 7500′.

The trail continues through a ghost forest towards Aurice Lake.

The hard dirt makes the tread less obvious, but a boggy section rounding the corner makes it reappear. A brief scree descent leads to what would be an outstanding destination in its own right.

The geology is pretty stunning.

While getting water from the outlet stream my camera, which was unsheathed in my open chest pack, fell into the water. It’s getting the rice treatment at the moment, and will hopefully survive.

The traverse from Aurice to the tarns in the south Lone Walker cirque is similar to the previous one, but the route into the cirque and down to the basin is much more rugged and complex.  We rounded into the cliffs, and found a good game trail leading off the ridge once we climbed to (animals are lazy!) 7500′.  Climbing directly up the ridge crest might be easier, but our route wasn’t bad.  The game trail traverses a few gullies before leading into a large scree field. 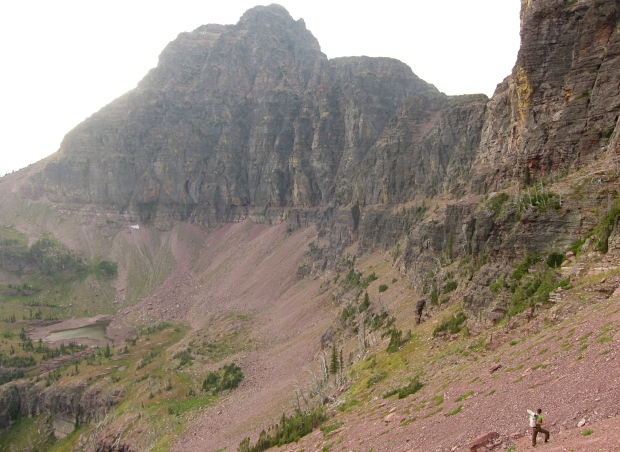 Diagonal down the scree and pass the lowest cliff band just descenders’ left of a striped slab.  We camped by the tarn in the picture.

The ranger at Two Med said they do not give undesignated (off-trail) permits for Aurice.  Too close and easy.  Normally they’ll insist that any undesignated permit also carry a bear can.  We convinced them we could hang our food, and found this excellent tree.  Even big trees like this have short branches, so I use the Sawchuk technique of clipping the bag to the line with a micro-biner, and using that to pull the whole rig away from the tree, thus creating adequate space from climbing juvenile bears (or expeditious pine martens).  Odorproof food bags and hanging away from where you cook are of course good ideas, too.

We picked this route out on a map only a few days before, and ended up picking our direction on a whim, while already on the trail.  It worked out well, and is the direction I’d recommend.  Normally going up through difficult, cliffy terrain is best, but the south route to the Lone Walker cirque has the narrow end of the funnel at the top.  The game trail isn’t nearly as obvious from below.

The morning of the second day dawned a bit hazy, and began with a short climb to the pass over into the Nyack/Coal drainage.  There are two passes going N-S here, we took the eastern one.  It’s taller, but the other one had short cliffs at the top on both sides, and we saw no reason to tangle with them.

The steep drop from the pass is very aesthetic.  Alpine forest, flowers, Coal Creek on the left, the very head of Nyack on the right.  Skirt descenders’ right at the edge of the talus to bypass the cliffs near the bottom.

It doesn’t take much “climbing” in Glacier to realize that while the views from summits can be excellent, the actual ascending in the park is typically utter shit.  My standards for outdoor fun are pretty broad, and 3rd class up mixed ledges and bad rock with endless scree and stacked dinnerplates doesn’t really make the cut.  The Owen-Spaulding is totally solid by Glacier standards.  So do summits in the Sierras.  In Glacier, where summits are a phallogocentric distraction for those lacking imagination, the real ticket is those places where erosion has made elegant linear travel possible in the alpine: on the big traverses.

We had some quality diversions as we descended, in the form of Pika watching and eating the fattest huckleberries I’ve ever picked.

We dropped to 6200′ and found decent game trails that, due to the profuse undergrowth and abundant feed, never really stood out or led anywhere useful for very long. 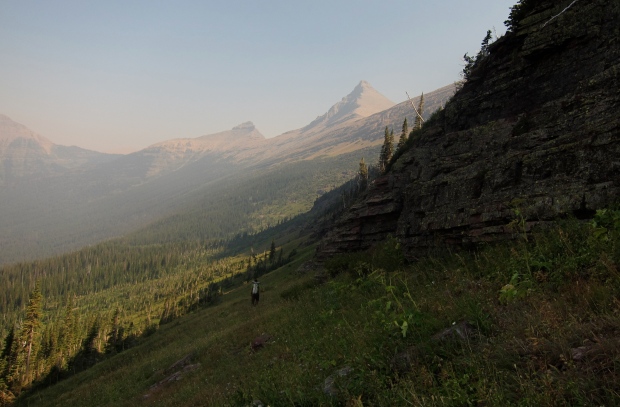 Side hilling at that elevation was straightforward, if you dodged the impenetrable krummholz patches, but unrelenting and wore on the feet.  We did find one bomber game trail which climbed very steeply towards the south ridge of Helen.  I hadn’t tried to get much beta on the route, and wasn’t sure from satellite photos if the ridge would go.  After some debate we decided to bail on the game trail and stick to the obviously workable route.  Ranger Sally told me today that the north and south traverse of Helen is a walk, so that would be the more stylish route for future parties.

As it was, we traversed into the gully draining the NW side of Helen, had lunch, and as the day grew hotter struck upwards through the steep meadows and krummholz towards the now-hidden Dawson Pass.

The haze, from unknown distant fires, grew throughout the day.  By early afternoon everything north of Stimson had vanished.

By the time we were close to below Dawson itself, the cliffs had relented such that everything was just hard class 2, “if the proper route is taken.”  The terrain actually pushed us a bit north of the lowest point, on typical Glacier munge: 20% ledge, 10% dirt, 40% scree, 30% talus.

Once you hit trail the fastest way back to the car and soda is, provided you ignore the ignominious tourist barge ride across the lake, along the north shore.  Good grizzly terrain.

This fellow, perhaps the prettiest grizz I’ve seen and certainly the darkest, was feasting on Serviceberries as he ambled and noticed us not at all.  About the best example of shoulder hump and dished face I can recall.

In late summer the 100 yards of river between Two Medicine and Pray Lakes is 14 inches deep, and wading it makes for a dandy shortcut.   We finished things off by arriving in East Glacier at 4:59pm, about the only way to get a table at Serrano’s without waiting.  The food was good enough, though not close to spicy enough, and we enjoyed a quiet and content drive home along the Middle Fork.  I’m anxious for this infernal heat to end, but not quite ready to turn my back on summer entirely.  It has been a good run.