A cliche title for a (by my previous standards) cliche outing.

Ali and Ranger Megan had an idea; climb Heaven’s Peak from Camas Creek. Perhaps there would be no bushwacking. Why not? M came home from work Saturday night with a nasty headache which had not abated by our 0430 wakeup, so I went by myself. We/I were to meet them at Arrow Lake no later than 0900.

Camas Creek, one of the Night of the Grizzlies locations, is something of a hidden gem; just over the ridge from the McDonald Valley, strung with trails which are rarely trodden.  I’ve packrafted there, and walked across its frozen lakes, but had never been beyond Arrow Lake, nor been there in summer.

It’s nice, and wild, with overgrown trails and a healthy population of Devil’s Club (including right in the Arrow Lake campground).

Megan and Ali are both park geeks: longtime employees who have explored corner after corner and have endless stories to tell.  Ali has apparently been a reader since the wolverine trips this winter, and kept unnerving me by referencing content here (“That tarp looks bigger in person..”).  Hi Ali!  Now quit procrastinating and get back to work (she’s in Bozeman for grad school).

They had competingly awesome hats: Megan with NPS beanie at left, Ali with the hat that wears you at right.

There was no brush, just plenty of chances to drop rocks on each other. Going back to help Megan over a bulge Ali brushed a microwave-sized boulder, which leaped out of the loose dirt and would have done some serious damage, had Ali not pulled a ninja move; turning and catching it like a shortstop in kickball. It busted into four chunks, one of which stayed put and the other three Meg was able to dodge.

Damage was a split thumb nail, a lot of blood, some new holes in a very well-used Patagonia windshirt, and further elevation of Ali’s badassedness.

The gully petered out into steep veg slopes near the crest, which was gained very abruptly. A good goat trail led up another 2k to the summit.

The views were absurd. 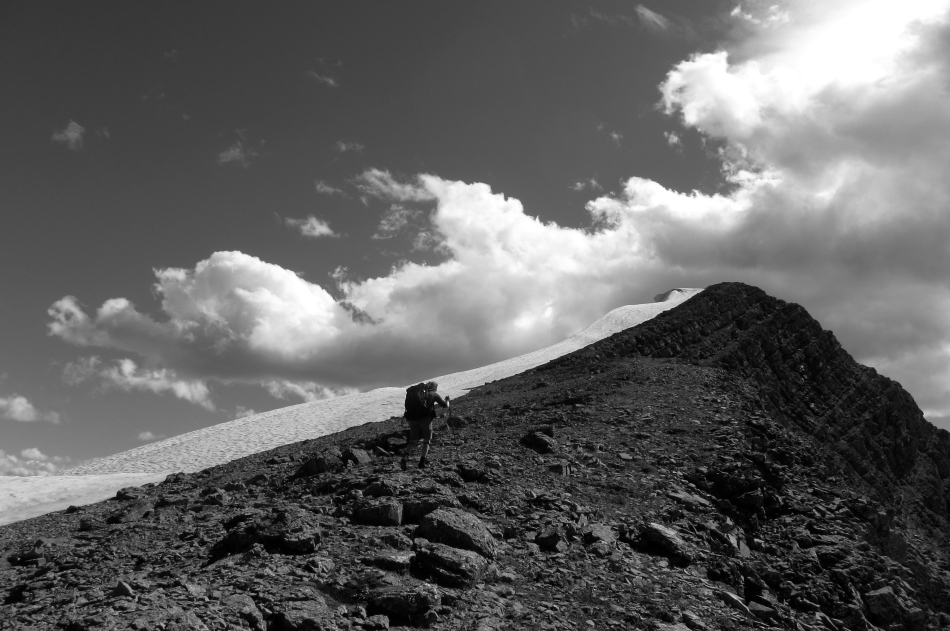 I have mixed feelings about climbing peaks generally, and the route, lacking totally though it was in bushwacking, was a mixed bag.  The ridge was cool, the gully only somewhat entertaining.  But the chief virtue of summits, being able to see stuff and link experienced terrain into a more coherent whole, is one which Heaven’s fulfills in spades.

Our camp is obscured by that green bump on the descending ridge.

We succeeded in not getting blown off the ridge, and headed down.  The gully was not any faster in that direction.

We made camp by dark, ate, talked, and went to sleep.  The next day Megan had a house to go buy and Ali had class on Tuesday.  I finished coffee and stretched sore legs, caught a few fish off that log pile in Trout Lake, and was home not long after noon.

They may be the mountains, but they’re also just what we do on the weekends.