If individuality is a lie, or at least phantasmagoric, than solo backpacking must be suicidal.  Right?  In spite of, and because of this, I enjoy it immensely.  Especially in our current snow drought, when I was able to do a substantive, 40+ mile loop over two days without needing skis or snowshoes.  In January.  Remarkable.

M had to get to work early, so I got left in Apgar to sort out a permit.  In the warm season Apgar is the epicenter of civilization.  Right now it’s the end of the road, and within a mile of heading out I was on unplowed road and effectively in the backcountry.  Beyond Rocky Point the deadfall on the trail got thick, and the beach, broad now at low water, beckoned.  I hiked the shore of Lake McDonald all the way north past the backcountry campsite, easily able to pretend there was no road along the opposite shore.

For most of that distance, small cobbles or chunky gravel made for good walking. 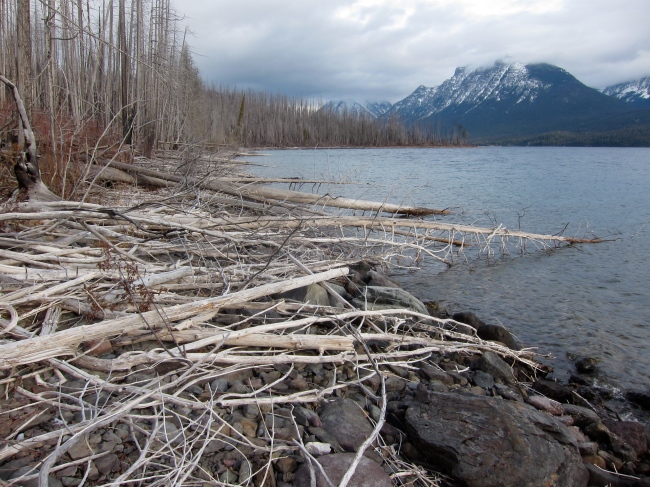 A few, predominantly east facing bays brought some serious pick-up-sticks action to bear.  The boots I’m testing for BPL have good traction in mud and snow, but terrible grip on wet rock and moist logs.  That fact did not help speed progress through the above.

NE of the backcountry site the burn ends and the damp micro-climate of McDonald Creek makes itself known, with thick moss and cedars.

I hit the end of the trail and was back out on a road, though this time it was dirt, narrow, and snow-free.  The paved access of this dead-end spur is a few miles beyond the closure, so I had things to myself.  It’s the unique, to-be-treasured experience of winter, having an isolated experience in what is seasonally front-country terrain.  Soon I was back on-trail, afternoon already wearing perilously on, headed over the ridge into a never-roaded valley, home to one of the densest Grizzly populations in Glacier.  They should be asleep, but the modest temperatures and meager snow gave compelling reason to expect otherwise.  And when I was hurriedly packing the night before I just could not find the bear spray.

Trout Lake was impassively frozen solid, and I made focused speed along the lakeside trail.  Several gullies, running up to the high slopes along Stanton, had slid far in the last few weeks.

Hard to see, but that debris wall is 40 feet high.

The first of only two occasions in which I wanted snowshoes was the stretch from Trout up to Arrow.  In the dark, alone, postholing knee deep in 160 pound crust (my pack and I were in the 180-90 pound range), the trip had finally begun.  Solo backpacking doesn’t until you reach the point where perhaps this no longer seems like such a romantic ideal.  You realize how easy death would be.  Being attacked by a bear, breaking an ankle, breaking through the ice on the lake while collecting water, having the shelter ripped away by winter winds, all of these are both easily avoidable and none of them would cause death.  Or at least not the death I’m thinking about.  Death here in the woods is being forgotten, by all the people who define and redefine your life, your existence, daily, and to whom you know alone cling by the fickle threads of memory.  The world reminds anyone daily of how tenuous existence is, enslaved as it is to the whims and unreliability of others.  There are two settings where I’ve reliably, more than any others, been reminded of this: in a dense room of strangers lacking in coherent common purpose (parties rich in quiet desperation), and alone in wilderness full of winter.

As Abbey wrote in the “Down the River” chapter of Solitaire (last July chapter); “Men come and go, cities rise and fall, whole civilizations appear and disappear–the earth remains, slightly modified.  The earth remains, and the heartbreaking beauty where there are no hearts to break.  Turning Plato and Hegel on their heads I sometimes choose to think, no doubt perversely, that man is a dream, thought an illusion, and only rock is real.  Rock and sun.”

Perverse because earth only exists as a word and a thought because you are around to have organization as a co-requisite of apprehension.  Paradoxical because the bedrock certainty of a world beyond human relations and sharing is as impossible as it is essential.  Though this weekend I’ll take water, mostly frozen, over the sun.

Biscotti and turkish coffee for breakfast.

I did not, contrary to rational expectation, die in the night.  I even slept well for 11 hours, waking once to adjust layers.  I was done, I had passed the test again, and however long the days walk would be back amongst fellows before bedtime.

The posthole was short in the morning light, and I did what I should have been confident in my presence enough to do the day before: put on my crampons and walked down the length of Trout Lake.

Impressive, lake-wide woodjam in the shallow end.  Must come back and fish come summer.

The rest of the miles, uneven snow, coffee break on the ice of Camas Creek, postholing the Inside North Fork road, and the worst 800 meters of the trip (right before reaching pavement again, of course) were all an effective denouement.  For a trip which had, in essence, lasted 8 hours, with 14 hour warmups and cool downs on either side.  Enlightenment, or just equilibrium does not come cheap, and I was even willing to pay the price of having a beer, watching the faux-cowboy bluegrass band in the Belton, and being hit on by a cougar from Bigfork while I waited for M to come get me.

Things are coming together.  For the moment.