The air was thick when we woke up on day 4. The halfway point in a backpack is significant for all kinds of reasons, foremost the mental hurdle of being deep into the process and embracing all the inherent difficulties. This explained our collective foreboding; we had many miles to go, and reasons to think that getting it done might be complicated. It was also damn cold that morning, as a mostly clear night had given over to fog low on the creek and frost on the grass out away from the trees. Yesterday, though only 10-12 miles, had been tough walking. Trepidation and cold, stiff bodies made for a slow morning. I decided to not mind. Our campsite was gorgeous, coffee tasted especially good, and I had confidence that whatever happened our group would pass eventually.

By the top of Mist Creek pass 11 miles in, it was clear that making our camp down on Yellowstone Lake would take a very long day.  Doable, especially as our next day was a flat six miles, but perhaps not desirable.  We were on vacation, after all.  The lack of drama in the moment was a testimony to how good our group was.  Amber said she wasn’t in for such a punishing day, we discussed options, took some weight from her, and set off. 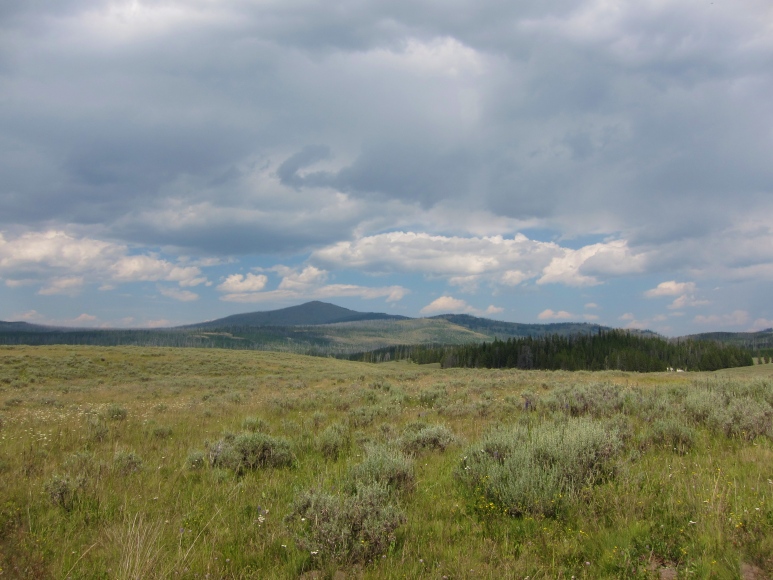 The rest of the miles through Pelican Valley did feel long, huge views of rolling sage plains and continent-like clouds notwithstanding.  Meghan and I indulged in a little gear talk (packs for multi-day running) to make the ultimate miles go quickly, and soon enough we were gathered under trees at the trailhead, planning a hitch into the Lake complex.  As hitching with four lowers the odds, Danni and Amber started down the road a ways.  I’ve had abyssmal luck hitching this year, highlighting the suspicion which seems to run through modern culture, and was not optimistic.

To my surprise, the third vehicle past is a 15 passenger tour van which pulls over.   Can the driver pick up our friends too, now 100 yards down the road?  Why not, she has tons of room.  I yell, and they scuttle back.  “Amber?” the driver says.  This was when our luck started to get ridiculous.  It would stay that way for the rest of the trip.

Amber, a fish biologist, used to work at Lake, first as a tech and then doing her thesis work.  The hope up on the pass was that she might track down an old colleague who would spare us the rigamarole of hitching around finding a camp spot.  First we found her old friend, now an bio-tour guide.  Second we pulled into the parking lot and saw an old colleague.  Within a few hours we were at the pub, drinking beer and eating pizza, with beds for the night and a boat ride across the lake to our camp the next day.

Seriously.  Amber is a good person to know. 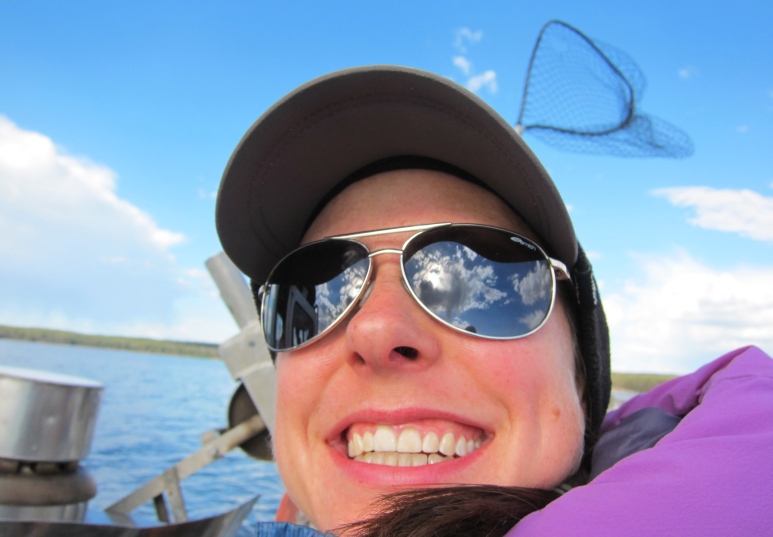 In every way that was the turning point of the trip.  The weather, which had been good but mixed, cleared and gave us a day of sun, puffy clouds, and a steady breeze straight into our gravel beach.  We washed ourselves and our clothes, ate (we now had plenty of extra food), and just sat there.  I got a bit of sunburn on the tops of my feet. 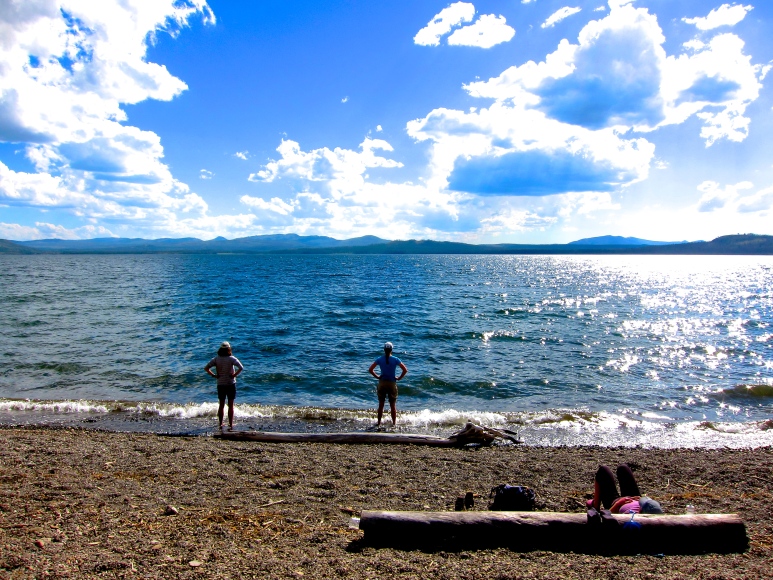 Life was goodly simple and simply good, exactly what backpacking is supposed to be.  We went to bed before nine, planning to sleep long, wake up early, and embrace the 23 miles on schedule for the next day, which was already our second to last. 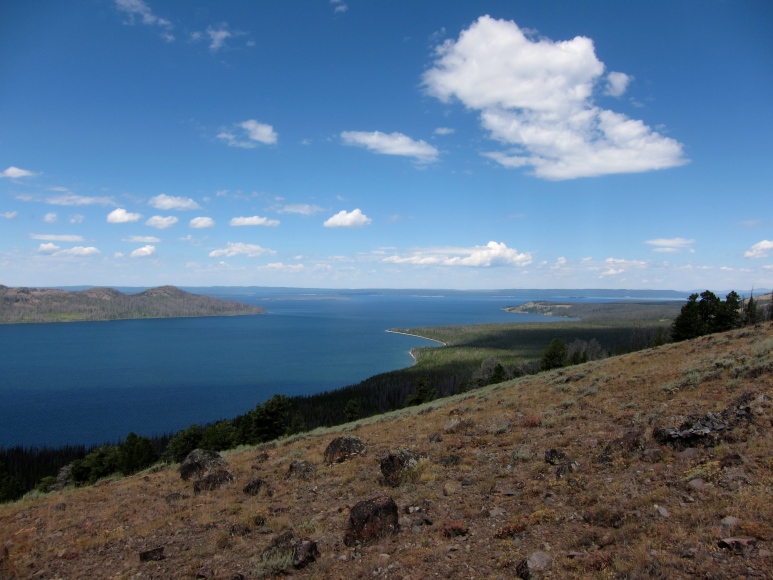 That day did not disappoint.  Early morning temps were luscious and cool, with a cearulean sun hinting at the heat to come.  The miles of the Thorofare trail at the south end of the southeast arm swing up on a bluff, giving big views of the three-mile wide willow bog which is the Yellowstone River, and the commodious valley stretching out of sight to the south.  It’s wild country, not so much in the spectacularly rugged sense, but in the sense of being intensely alive: areas which are at once so inviting of life and so far from roads and regular human traffic are not so common in the lower 48.  They feel different than more visually arresting but harsh landscapes more common to capital P parks and capital W wilderness.  That the Thorofare, big and gentle as it is, never had a road in it is evidence that America’s best idea came at exactly the right time.  Looking back over the water I had flooding memories of three years ago, when I was coming the other direction and the view over the still-frozen lake marked re-entry to civilization. 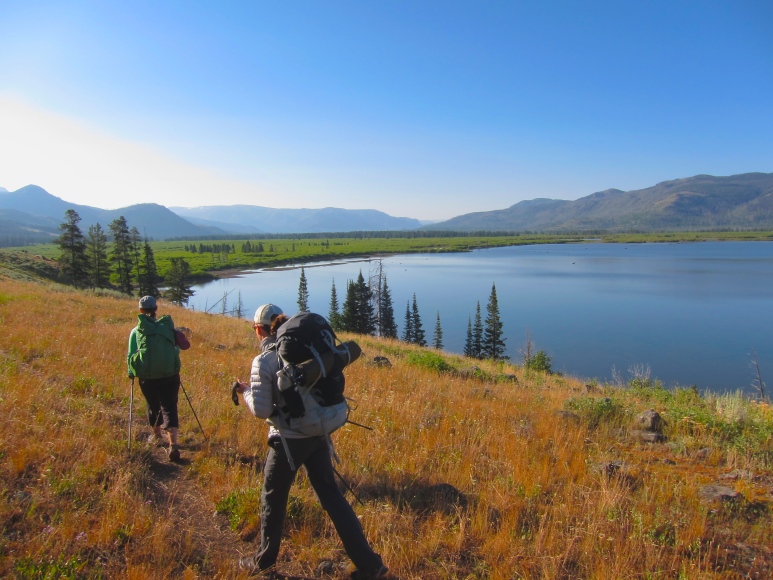 It felt like we were still heading in the opposite direction.  Taking a mid-morning snack at the Cabin Creek cabin, a funny noise in the brush resolved into wolf pups howling.  The ford of the Yellowstone was managable, but still big and swift enough to feel real.  The tread from Trail Creek to Heart Lake was faint, the views up the southeast arm, south arm, and various meadows constantly changing, and the breeze just enough to cut the heat on a ruthlessly clear day.

Yellowstone terrain is unique.  The prodigious amount of water (snow) shapes the land in ways which bend the usual rules.  Outlet Lake is a good example.  Late in the day we meandered up a gentle valley over the Continental Divide, loosing and finding the trail in each meadow.  Suddenly the bottom drops out, with a small lake in front of our toes at the bottom of a steep, small basin.  A small, but for the drainage area incongruously deep, stream wended its way through the broad, straight meadow, hidden by willows.  Our camp was a mile down, the food pole tucked into the last stand of tress, and our tents pitched on flat grass, with a few exploratory lodgepoles for shelter and big views in every direction.  As the sun went down and the skeleton forest on the east rim glowed white, the coyotes howled.

It was my favorite camp of the trip.  When I got up around 0230 to piss the milky way ran parallel to the valley, head to foot overhead in two strands.  It was the clearest night sky I’ve ever seen, and I stayed standing outside until cold drove me back in my bag.  Five hours later, standing in the same pose, a big black moose trotted by on the other side of the stream.

My tired feet were real the final day, as was my suddenly tired mind.  Last days are always the same, a rush back to familiar comforts, regardless of the miles.  Sitting on the side of Heart Lake, we talked about ice cream, beer, and cheeseburgers.  I was anxious to be done, while at the same time very sad to see it come to an end.

As happened so often all week, Meghan was of similar mind, and trying to keep up with her climbing out of the basin was good entertainment.  I made it most of the way, slipped ten feet back, got a side stitch, slipped another fourty, tried to claw my way back, and then blew up completely.  I can live with getting dropped by the reigning MDS champ. 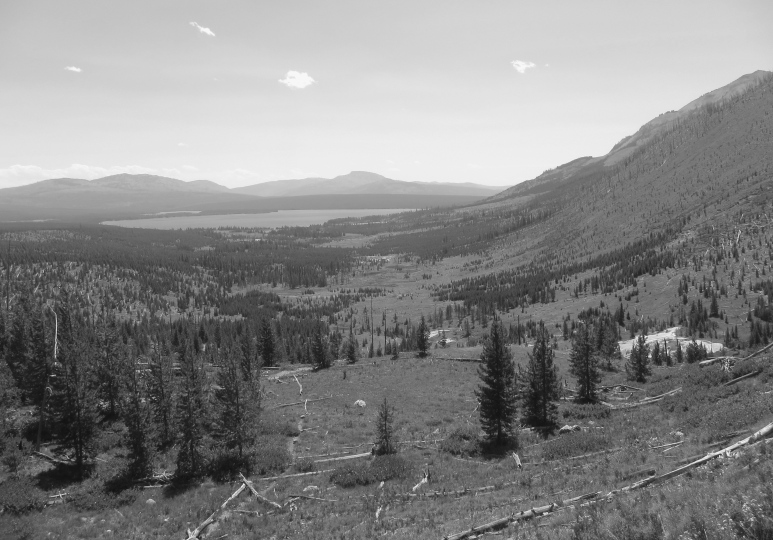 The last four miles dragged, as they do under all but the best circumstances, but suddenly the world was going far too fast.  We had warm beers at the trailhead, sandals on dirty feet, and quickly enough far too many choices at the Grant general store.  I never made it to the ice cream, the burgers and fries smelled too good.

Meghan: “How did you get here?”

Checker from Slovakia: “A plane.”

Sitting on the bench out in the sun, I payed for inhaling the food and a liter of root beer with a stomach ache that almost had me lying on the concrete.  I was very glad Meghan was driving, as 40 mph was frighteningly fast.  I wanted to stop and yell at the loafer wearers stopping in the road to photograph elk and deer; tell them what was out there, but shell-shocked into apathy I just sat and stared.  The rest was just a steak dinner, more uneasy stomach, breakfast the next day, long goodbyes, a drive home, and resolving being back in the same old places after a week which almost felt like a month.  Yesterday I felt like a fugitive in my old skin, sneaking around friends and colleagues wondering if they’d notice I wasn’t the same person anymore.  Worried that after too many times making the same drive and sitting in the same chairs doing the same things I’d forget myself.

That’s why it’s important to write things down, so you can go again, soon.