The usual 2-4 day trips my life choices permit are fairly easy to plan, even in harsher seasons. A week, even in good weather, has less margin for inattention. That said, no major errors were made by anyone, and as detailed in the previous days the trip went smoothly.

It should be apparent that the most important thing about a longer backcountry trip is partner selection. Experience is sort of important here, but matched temperaments and mentalities are much more significant, if rather intangible. I’ve done enough trips, especially earlier in life, with objectionable folks that I simply refuse to take chances in this area. Life is too short. In spite of rarely being further than 100 yards from the crew for nine days straight, I found them all as amusing and interesting at the end as at the beginning, so mission accomplished there. Thanks crew.

As far as group gear goes, we decided early on to use two two-person shelters and each prep and cook our own food. This was more for convenience than anything, as coordinating food via email takes a lot of time, and we only had two-person fully enclosed shelters available to us.

Meghan and I used her Copper Spur UL2, and Danni and Amber used a Shangrila 2 with nest. As these choices show, we were concerned about bad mosquitoes. Remarkably, we hardly saw any mosquitoes, not something that happens very often on our route in late July. The combination of an early melt off, hot June, and consistent winds most of our trip meant that we could have saved over a pound per person using tarps instead. That said, it was a safe bargain, and one I’d make again. It had been years since I’d slept in a conventional tent on a backpack, and was impressed with the intelligent design and fast setup of the Copper Spur, but not enough to pay that much or carry that weight on a regular basis.  We had rain on most nights, but no especially high winds, so the shelters weren’t tested very rigorously.

I brought my Spinnaker flat tarp for a kitchen shelter, which made life pleasant on a few nights when it would have been annoying hiding under separate trees.  We had fires the first three nights, and the last night and morning, which were very nice.  Yellowstone is full of nicely ground-cured hard pines which make fantastic firewood.

We brought two Jetboil Flashes, for redundancy and convenience. Not the lightest option by far, by the speed with which they boiled water made group dynamics more efficient, especially when getting coffee going. We could have brought quite a bit less fuel. We had one large and two small canisters, and could have gotten away with just two small ones for the week. Know I need to get a Jetboil or Reactor, the fuel efficiency is impressive. 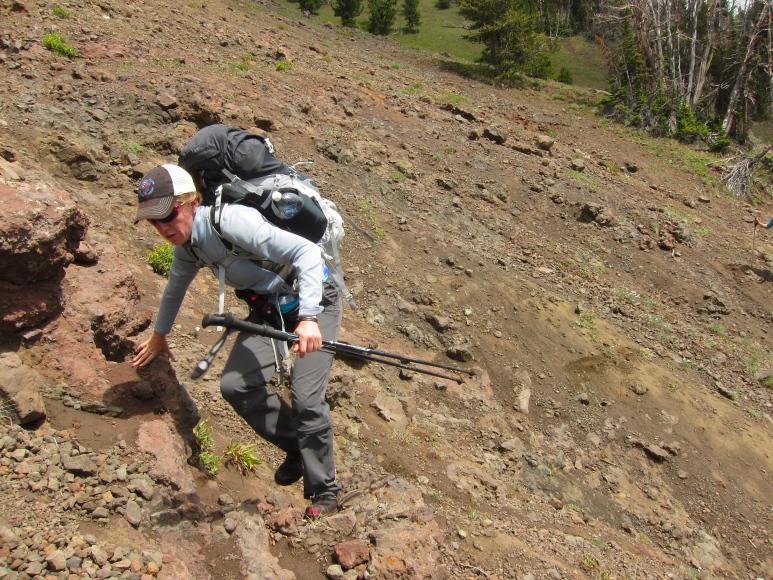 I used the Gossamer Gear Gorilla, Meghan an Osprey Talon 44, and Amber and Danni Jam 50s.  All worked well, though the Jams were a bit large.  The mesh pocket on the Gorilla was great for drying the tent fly and tarp on the go, and the pocket layout made organization and eating and drinking while walking very easy.

Footwear reflected personal preference.  I glued my X Countrys back together for this trip as they’ve been much trail-tested for me.  They held together and worked well.  Meghan had Salomon XT Wings, Danni Hoka One Ones (not sure about which model), and Amber Scarpa Sparks.  Amber and Danni brought Crocs for camp and river crossings, while I brought (for the first time in years and years) flip flops for camp.  Shoe changes for stream crossings ate a fair bit of time, but Danni’s feet are unusually sensitive to maceration so this was a necessity.  All shoes worked well, with few blisters and no serious problems, though Danni’s platform shoes didn’t make the loose sidehilling on day three any easier.  We were all glad the Meghan was slowed by her boat anchor shoes (wink).  For me, having camp shoes was awesome.  For trips with much camp time at all, especially in warm weather, they’re really nice to have.

Clothing brought was all about the same, though the ladies had more extras than I did.  What was both different and amusing was how often they had their puffy jackets on when I did not.  Meghan hiked in her down jacket seemingly whenever the temperature was below 50, a good testimony that following anyone’s recommendation too closely may not be a good idea.  Individual metabolism and body mass make a big difference.  I’m certainly glad I’m not 5’7″ and 120 pounds, it would make winter a serious pain.

As Danni demonstrates above, a good rain jacket was important, even though they rarely got worn.  The 20-30 degree temperature plunges when each hailstorm rolled through were impressively quick.

Food is the biggest thing on a longer trip, and I still have a lot to learn here.  My 60/40 granola/grape nut breakfasts were awesome, and my dinners were good too.  Couscous and dehydrated black beans with various spices was the highlight.  My lunches were adequate, but monotonous, and left me with few exciting option by the last two days.  Danni’s food bag was enormous, and like a magic clown car kept producing stuff all the way to the end of the trip which left us (mostly me) in jealous awe.  She had some good ideas I’ll have to borrow for my backpack hunt next month.

For all those words, it was just a backpacking trip, and one of the more delightful things was seeing how little stuff we needed to thrive out there.