Yesterday morning I woke up in one of my best camps of the year.

After a frustrating day stalking and glassing all over a series of hillsides and bottoms I retreated to the edge of a meadow near a major creek confluence to see what might come in the last hour of daylight. It was a relief to not have to worry about the wind, or stepping on a stick, or which sub-ridge to take. Instead I curled up under my serape (absolutely vital for hunting) and waited. Nothing came, so I built a little fire to warm back up, ate dinner, pitched my poncho tarp under a big p-pine at the edge of the forest, and went to sleep. I slept long, as my very early start the previous morning would suggest, and didn’t wake until it was a bit light. Spidery frost covered everything, except me and the patch of grass under my tree. On the distant hillside a few, select larch were just fading into yellow. They seemed a bit in denial of the season, as autumn was thick and hard in the cold, still air. Hunting seemed absurd under the circumstances. The crunch of every dropped pinecone rippled out amongst the trees like a pebble thrown into a beaver pond, the background gurgle of the creeks mitigating the shock of each not at all. The unexpectedly infrequent squirrel trills and jay calls were trombone blasts from the backrow of a cathedral at 0730 on a weekday.

BBeing able to strike camp and be moving in 5 minutes seemed like an appropriately stealthy treatment of the moment.

I did would I could, but later that day walked back over the invisible line between open and closed season on deer and elk with a light pack.  If I should be doing something differently, I don’t know what it is, and that weighs on my mind.  As I mentioned last week, it’s peculiar to have a good walk not satisfy.  It’s also a pain to move slow all day in near-freezing weather, constantly only just ahead of being cold.

Seeking redemption, I tried to shoot the head off a grouse (a body hit with a .243 will immolate such a bird).  I missed the first, which did not help my mood.  For the second, I took my time, used my pack as a rest, and knocked the head clean off at 25 yards.  I cleaned the bird at the next creek crossing, admiring the camouflage feathers, delicate bone structure, and enormous chest muscles (which must account for a quarters of the birds weight, in addition to being exceptionally tasty).  I was content to put the rifle away, and eager to at last walk at a hikers pace, rather than a hunters.  I even added a second bird to the pot with a crafty trekking pole assault.  That was contentment enough.

Looking back to January, and trying as I walked with impressively little success to catalogue and chronologue all the rest of the years best camps, made one thing clear.  If you want your days and months to be longer than their mere hours would suggest, doing a lot of backpacking is a good idea.

4 thoughts on “Make your year long” 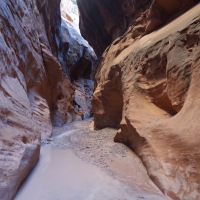