The South Fork of the Roost 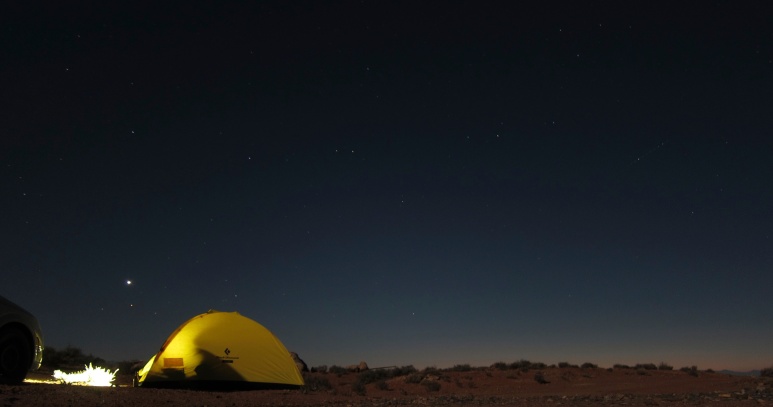 When we lived in Utah the Robber’s Roost was one of my favorite places, and two weeks ago I was reminded that it remains so today. Driving out the sage flats as the sun sank behind the Henry Mountains I concentrated on missing rocks and not flatting our little car. Views as you traverse the massive, gradual hump of dirt and dust between the Dirty Devil and Colorado change slowly, though the few miles heading over towards Burr Pass and the Ekker ranch, from which you can see both the Henrys and La Sals, is not to be missed. I dodged ruts down off the mesa in the dark, managed to not get the car stuck, and we made camp under the moon.

It takes a keen eye, or prior experience, to know just how elaborate the canyon systems hidden in the middle distance are.

First epiphany after four years in Montana: you can see everything in the Colorado Plateau.  The rising sun highlighted different detailed minute by minute, leaving little mystery if I had the where-with-all to see well.

Our “warm-up” destination was the South Fork of Robbers Roost Canyon.  In our Moab days, when the introduction of mass-market technical canyon beta spelled either the death or birth of the golden age of American canyoneering, I made a list of canyons to hike.  Only a few where left when we moved away, and the South Fork was one of those few I’ve yet to attend to in the years since.  It’s long enough, and the exits from the canyon system few enough, that it almost demands an overnight.  Back then I was still captured by the climber mentality of everything-in-a-day.  Now I embrace backpacking, and the miles of canyon walking our route necessitated was as attractive as the slot itself. 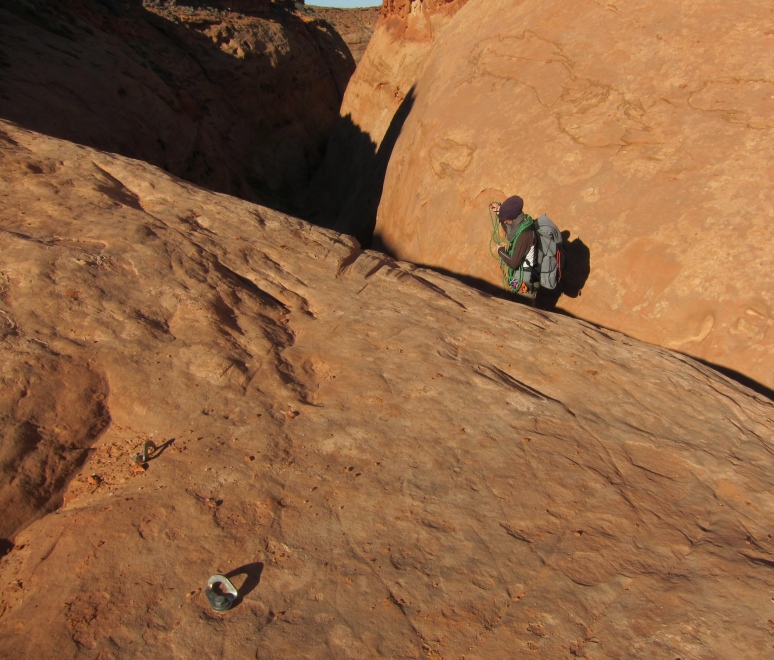 A short walk from camp brought us to the South Fork spring, home to piping, old pools and game fences constructed from juniper logs, and lots of cow sign.  Another short stroll down the wash brought us to the first drop, home to some poorly placed and unnecessary bolts.  Note the rope grooves caused by anchors too far from the lip of the drop.

We built a cairn and dropped in.  The total weight of our rocks was probably 600 pounds, and the friction of the rope on the lip and proper rap technique brought the force on the anchor down to a fraction of that.  Nonetheless, I clipped in to provide M a bodyweight backup. 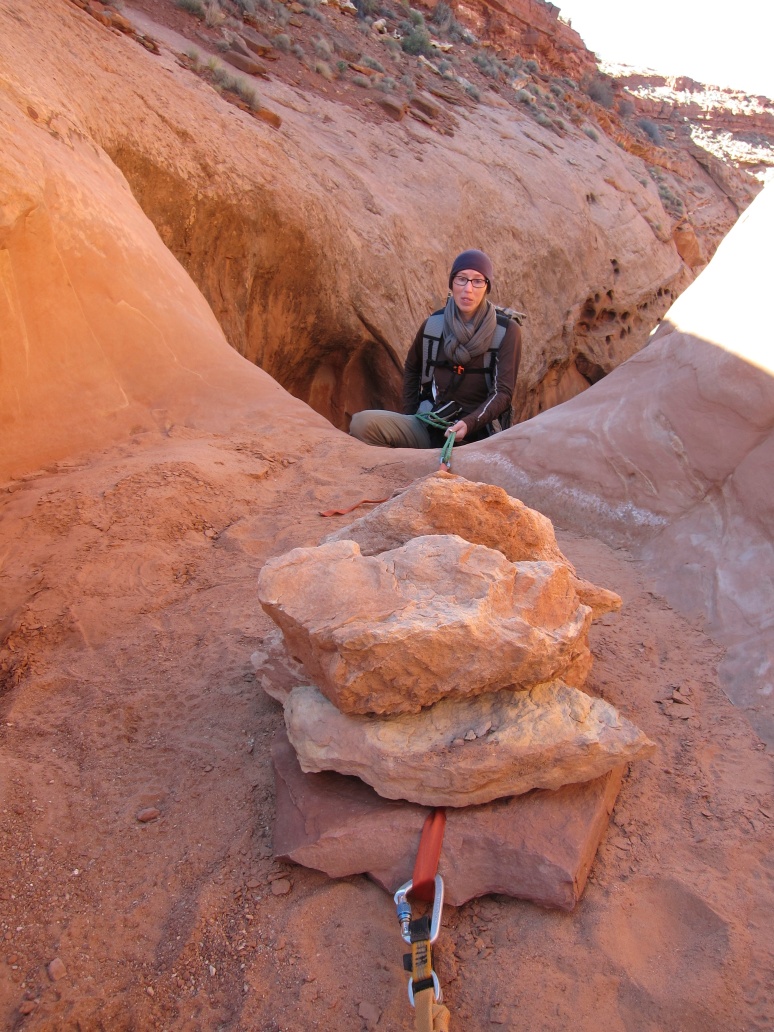 There has been, and will continue to be, a lot of debate about canyon anchors.  The most relevant point is not the particulars in question, but the vociferation of the debate itself.  The desert is sensitive to human passage in places, but beyond all other delicate biomes it holds evidence of prior visitors, obviously.  No one hikes in remote canyons to commune with obvious ghosts, and insofar as the particulars of this debate have little environmental consequence (use trails and shit are exceptions), minimal visual impact over years should be the standard. 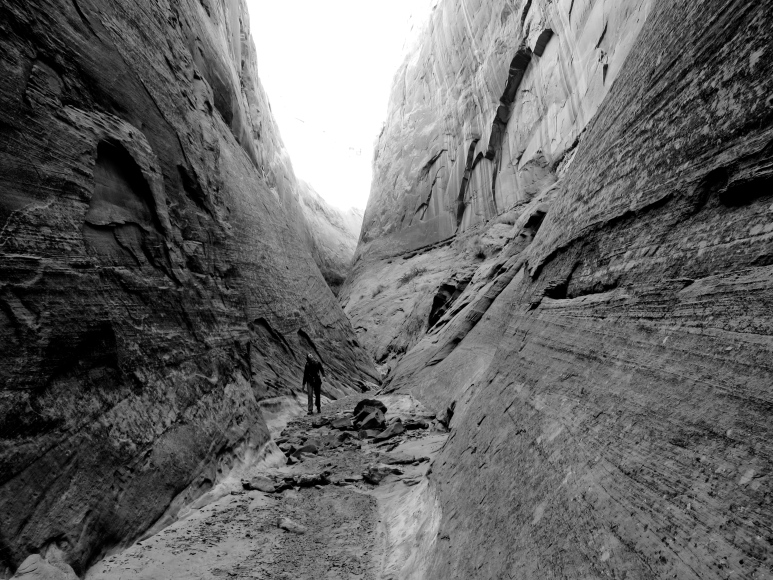 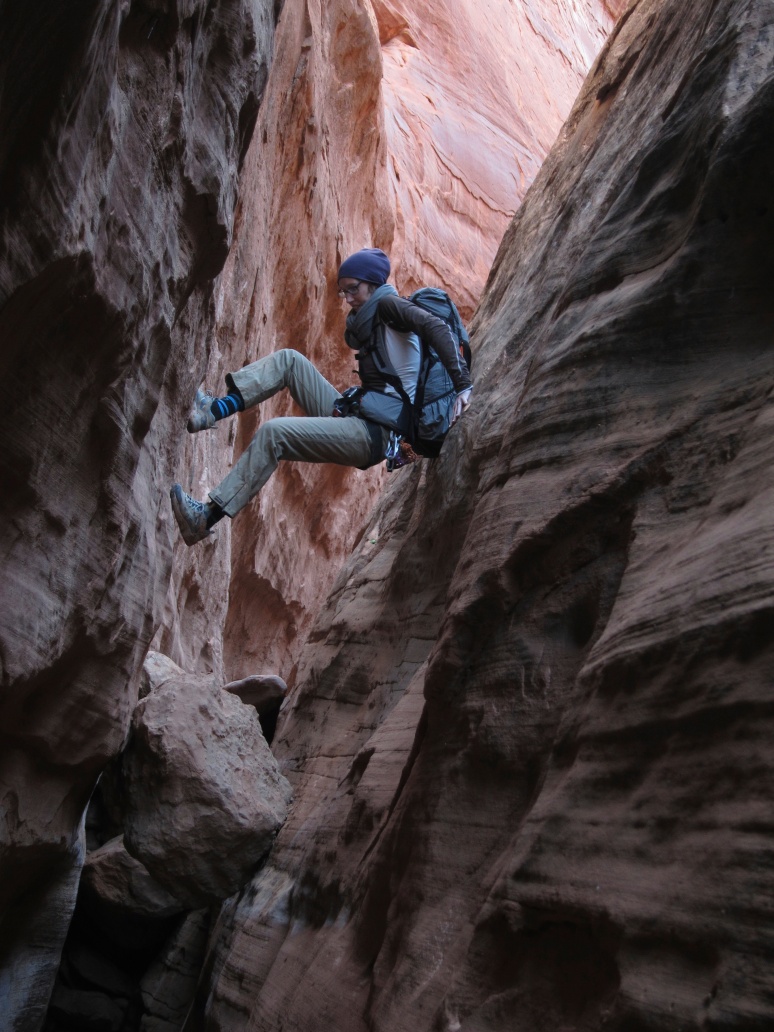 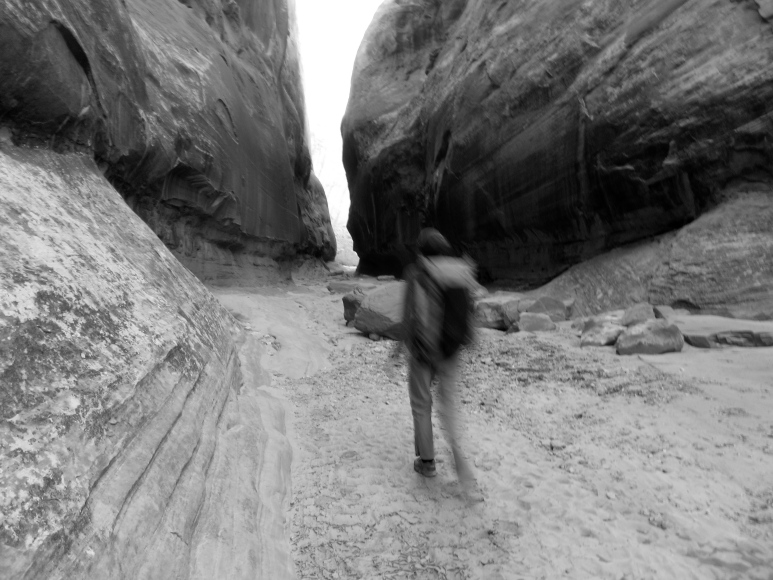 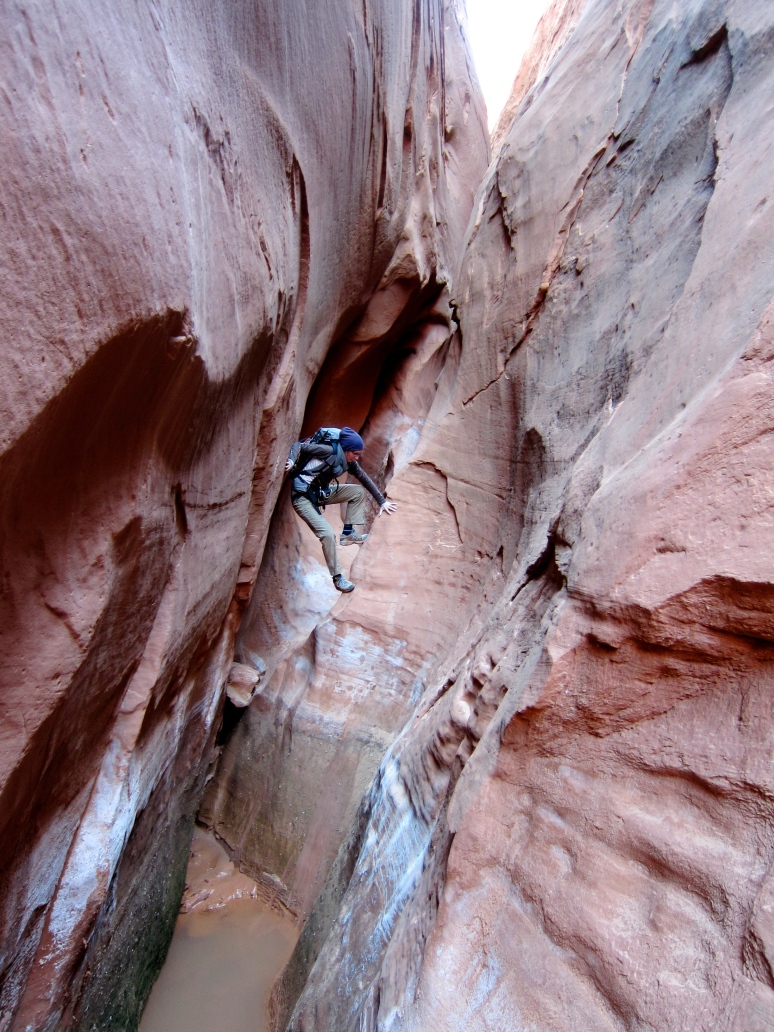 Rather less fantastic was another epiphany won by time away: the canyons get a lot more traffic today.  The South Fork is not technically fierce on paper, a fact which combines with the aforementioned length to keep away most capitol C canyoneers and instead favor adventurous backpackers and trophy thrill seeakers.  I speculate that this is responsible for the sake of the anchors in the canyons, which were without exception piss poor.  We replaced webbing and re-rigged every one, and deposited a rainbow of 120+ feet of nasty webbing in the dumpster in Hanksville two days hence. 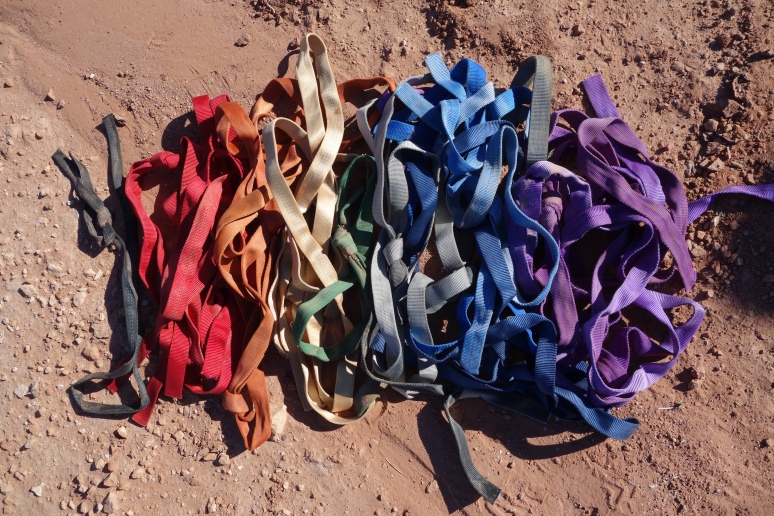 But even the fuckers a day ahead of us who left their golf visor, beef jerky bag, panties, and initials (with date) scratched in the rock couldn’t dent the mood. 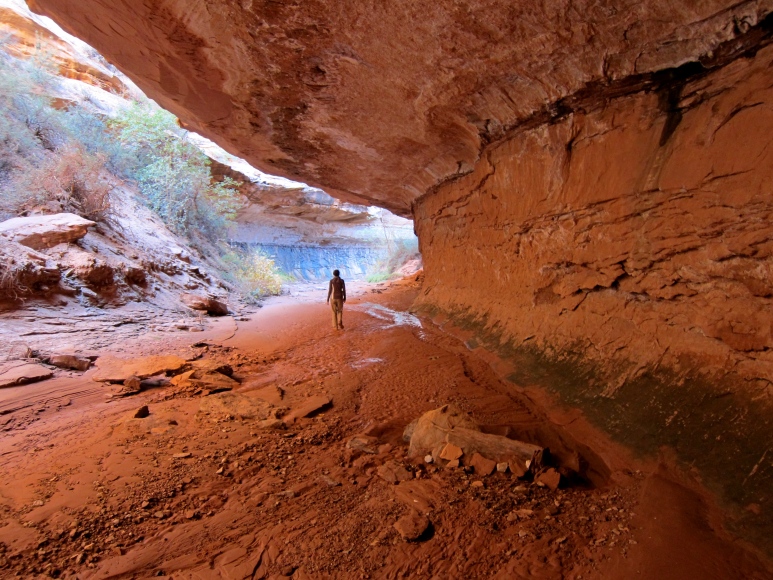 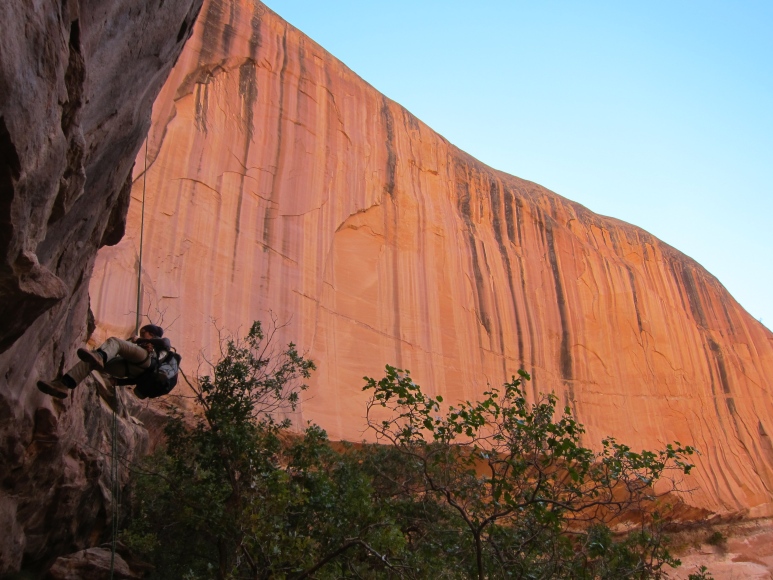 Slot gave way to big walls, abundant pools, and tight meanders, which gradually widened to sand, pinnacles, and cottonwoods midway through their autumnal transition.  It was gorgeous. 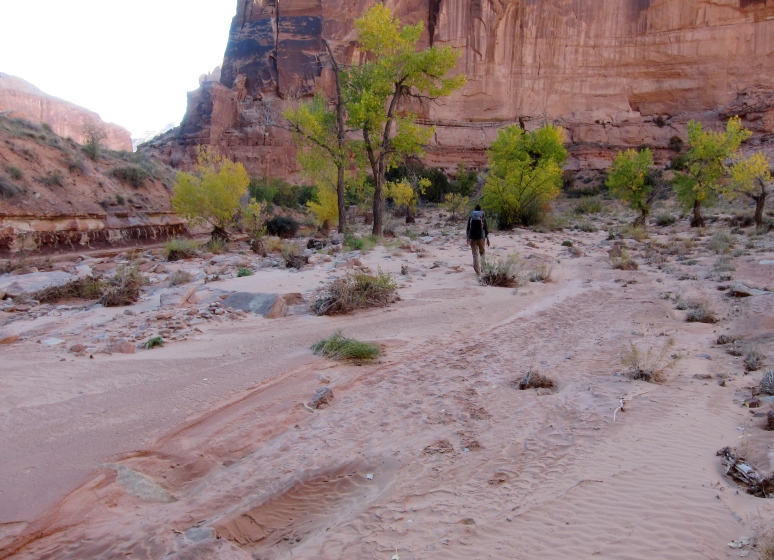 Late in the afternoon we had walked off our map, and were flagging a bit in the sand.  The confluence with the main fork would be obvious and a good landmark to camp by, but the chill of evening and an obvious side alcove with a spring had us set up camp in the wash what turned out to be 1/3 of a mile short.  We pitched the mid in packed sand, gathered water, made dinner, and as darkness settled fired up the new wood stove.  This was appreciated, as the temp dropped well below freezing and our bodies, light on dinner and heavy with fatigue from the foreign environment, fought to keep warm.

The full moon lit everything with a ghostly light only curiously removed from that of day. 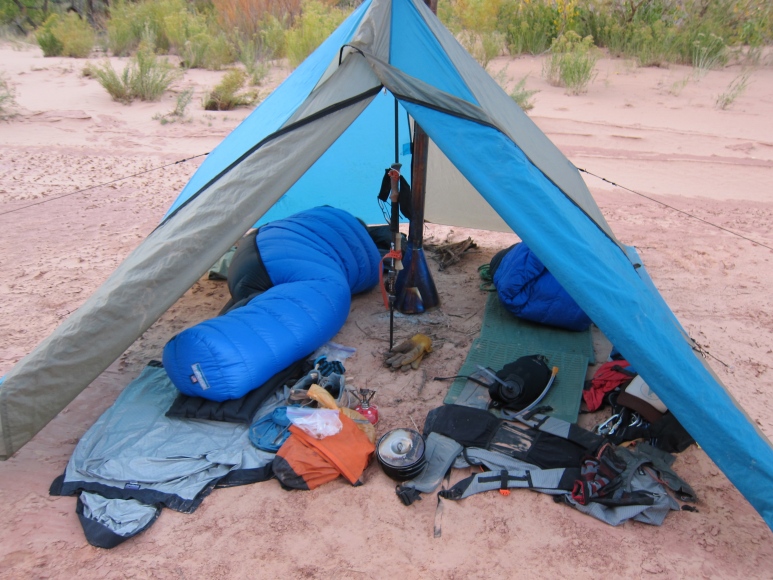 Morning camp slowly, pink light creeping across and then down the walls.  We burned a few more sticks as we ate breakfast.

The main canyon was obvious, and among other things marked by our first glimpse of tamarisk.  We followed a deer trails through the thicket and up the main fork.  Evidence of major floods from the month before were obvious everywhere: seasonal pools full of murky water, grasses tamped flat, quicksand, and a dozen species of flowers.  The air at 9am was 60 percent winter, the leaves in the trees 95 percent fall, and flowers and rich green undergrowth 75 percent spring. 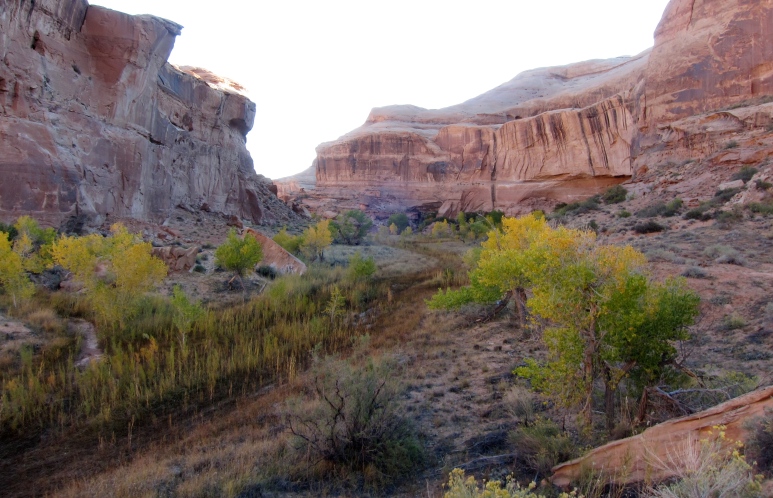 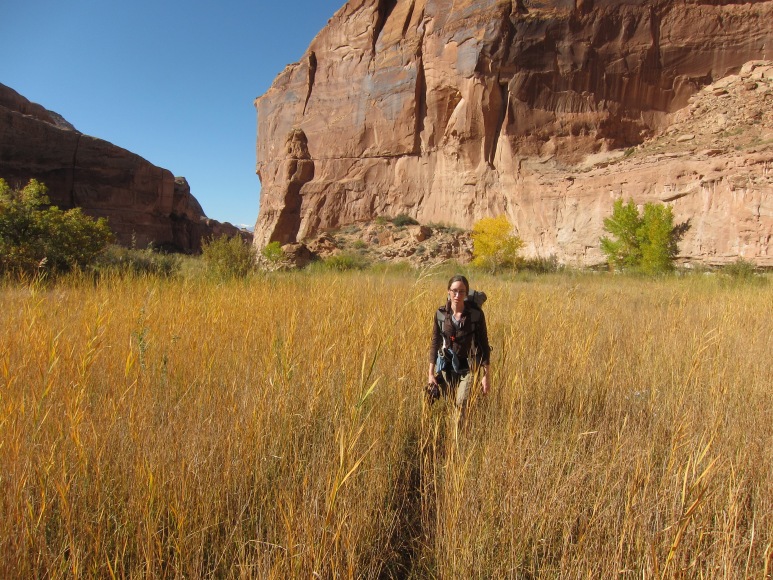 By late morning the sun was reaching us consistently, and we tanked up on water and layered down just in time to head up and out the infamous moki step exit. We’d each done it a number of times previously, as part of day trips through the various north forks above. An easy 25 foot slab leads to an easy 20 foot 5th class wall. Not the sort of thing you’d realistically ever fall off, but with a drop emphatic enough to make you contemplate the improbable. I wasn’t ready to do it with a pack like back in the old days, but felt comfortable enough soloing it, hauling packs, and belaying M up. 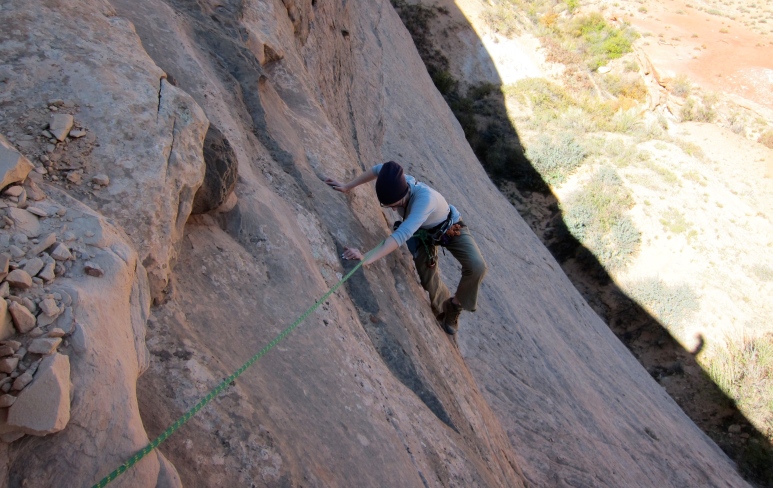 Only the slickrock stairmaster to the rim and a healthy road walk back in the heat of the afternoon remained. 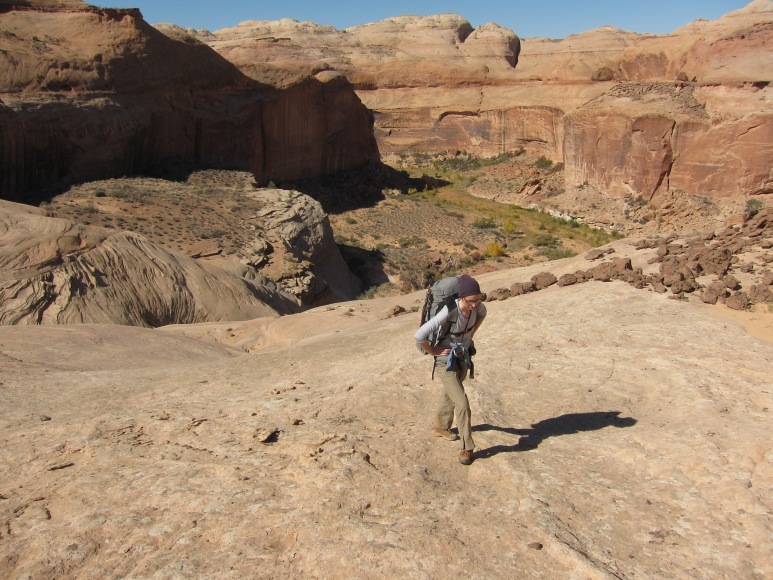 My canyon sense was and is rather rusty, and after some dumb mistakes route finding we were up on the flat, knocking off the road walk, and drinking beers at the car, looking northwest towards Hanksville and burgers at Stans, 30 straightline miles and a two hours drive away. 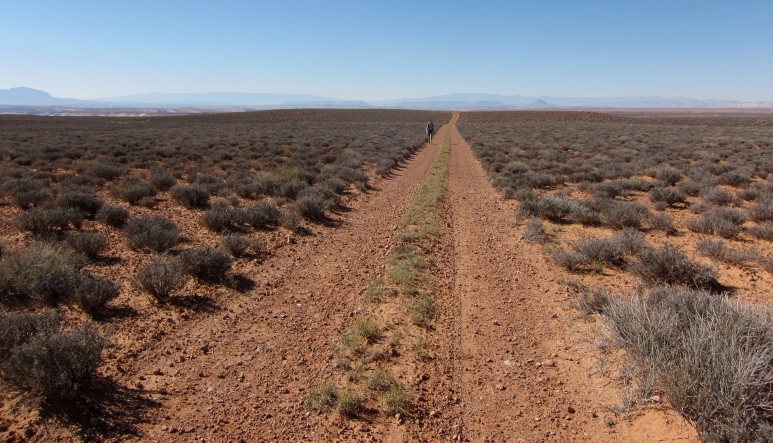 It took quite a few more days to get into the groove of the trip and process those miles, but I can now say this was one of the most memorable trips of the year.  And yes, we’ll be moving back to Utah.

5 responses to “The South Fork of the Roost”