A few weeks ago a few folks got stuck in a relatively remote canyon in Utah.  They had driven 3+ hours off the pavement, descended a technical slot canyon (which is pretty moderate, save the rap which is usually a 60 meter drop off a rock stack), and proceeded down a very pretty canyon to the exit.  Said exit is described on the map as a “5.4 hueco wall.”  Unfortunately it faces north and as it never gets sun in January, never melts off, even weeks after snowfall.  Unable to climb the wall, and unable to find another way out (the nearest alternate on that side of the drainage is ~5 miles downcanyon and easy to walk past), they called for rescue, presumably (public details are thin) after many cold and stressful hours. 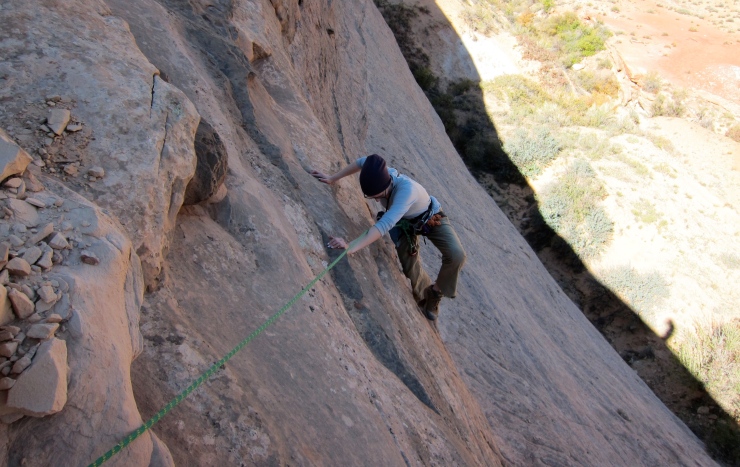 As the above photo of M on this exit a few years ago shows, “hueco wall” sells the situation a bit short.  Thirty feet of sandy 50 degree slab lead to a short, vertical pitch with big pockets and several very strategic carved (by modern humans) dishes.  The two moves M pulled to grab that nice fat ledge she has with her right hand are probably 5.2, but the exposure and fall consequence enhance gravity quite a bit.  I soloed it, hauled packs, and gave M a belay, and when pulling the moves was quite glad to have multiple ascents of the same exit and multiple decades of rock climbing under my belt, especially with rather dusty skills.

Canyoneering in the Colorado Plateau is one of the funnest things in the realms of outdoor adventure, but like packrafting wilderness in the northern mountains (another, slightly colder and more intense funnererer thing) the dynamic of the activity lends itself to folks getting in over their heads.

The Coalition of American Canyoneers administered a survey last year, seeking to analyze the demographics and experience levels of practitioners, and released the report last month.  It’s interesting reading, if you’re into that sort of thing.

That US canyoneers, or at least US canyoneers who frequent internet forums, are majorily white oldish men who make a fair amount of money will surprise no one.  The same can be said of almost any outdoor activity.  It is no less remarkable that fully half of the respondents took up the activity in the last five years.  Hiking down skinny canyons with ropes has been around for a long time, and two decades ago “canyoneering” meant rugged backpacks like the Narrows or Buckskin Gulch.  It’s been around 15 years since Tom Jones started his online guidebook and Mike Kelsey published a technical slot guide, and 10 years was how long it took for public momentum to build.

The rest of the report has some good analysis that hint at the heuristics at play in canyoneering, but for me the most significant conclusion is that a large portion of canyoneers are folks who don’t have a large body of experience, and do have plenty of time and money to pursue their new activity.  Unsurprisingly, this is a good way to end up with lots of rescues.  Everyone makes mistakes, eventually, and some mistakes are even made more often by experts than novices, but some things can only be had by years, rather than days, in the field.  It’s almost always worth being a little patient when it comes to developing technical skills, and it is always worth reading accident reports to save yourself future grief.

6 thoughts on “Canyoneering and accidents”