This post the other week got me thinking about the fact I’ve never called for or thought about calling for a rescue, on what occasions I’ve been closest to doing so, and what things prevented me from doing so.  The following is a fairly hasty and not especially hierarchical overview of the incidences which came to mind.

On two occasions have I forced by conditions/ chosen to bivouac out without prior planning, and with marginal equipment.  The first was in the summer of 2009 during a high altitude mountain bike “race” in Utah, where poor route choices and lack of a map or GPS track saw me wasting hours on an absurd buskwack that in turn saw me top out the very end of a big plateau right in time to get soaked by a massive thunderstorm that blew in with twilight.  Bad decisions were, as mentioned, going out with minimal navigational tools, making silly choices (read: not following Dave Harris’ obvious tracks), and being a bit underguned with clothes.  I had cycling shorts and jersey, arm and knee warmers, a Houdini, and probably a light hat and gloves.  Good decisions were staying back in the trees to maximize shelter as the storm rolled in, and having a space blanket and fire starters in my pack.  Without fire, which was hard to start, that night would have been dangerous.  With it, I was surprisingly only a bit uncomfortable.

I didn’t call for a rescue on that occasion because I didn’t need one, an assessment made easier by the fact that it was July, not that cold (even at 10000 feet in the rain), and I had just enough of the right kind of gear.  Had I wanted/ needed one it would have been difficult to arrange in a timely fashion.  I had a phone and minimal service, probably enough for a call to 911, but I did not have a precise grasp of my location.  Fire starters and enough peace of mind to suffer through the night made the difference here.

My second forced bivvy was two years earlier, on a technical canyon descent in Zion.  M, Phillip and I got a lateish start to a route with a complex beginning and end, and made that late start a bit worse by initially dropping to the wrong drainage.  We made it to and then down the big wall rap sequence into the Narrows in daylight, but the long walk down the Narrows was all in the dark.  Mentally and physically knackered by the time we got to the road at ~2300, and with the shuttle no longer operating and our cars eight miles of pavement away, we slept in the relative warmth of the handicapped bathroom.

Our mistakes consisted almost entirely in not being at the trailhead earlier, and taking this still-obscure canyon with substantial technical challenges a bit lightly.  Even though we took plenty of time making sure we had the right drainage, and in arranging a good route down the continuous 700 feet of rappelling at the end of the slot, I’d do the same again.  Such things just don’t allow mistakes of any kind easily.  Otherwise we were equipped to sleep out, and had we not been the cars were only a straightforward, if footsore, 2.5 hour walk away.  As I mentioned at the time, the space blanket was very nice, if small for three, and that use of it was probably why I had one two years later, when I needed it far more.  No real probability of a rescue here, and I don’t think we could have called one had we wanted, back in the days before Spots.  Indeed, and think M and I only had one cell phone between us back then.  Phillip’s girlfriend (now wife) Ariel knew our plan and would have called had we not checked in by noon the next day.

On a few other occasions I’ve been close to spending an unplanned night away from either car or camp, one of which I detailed here.  The common threads are that route finding down cliffs in the dark is hard, but that patience, a decent light source, and warm clothing will eventually sort those issues out. 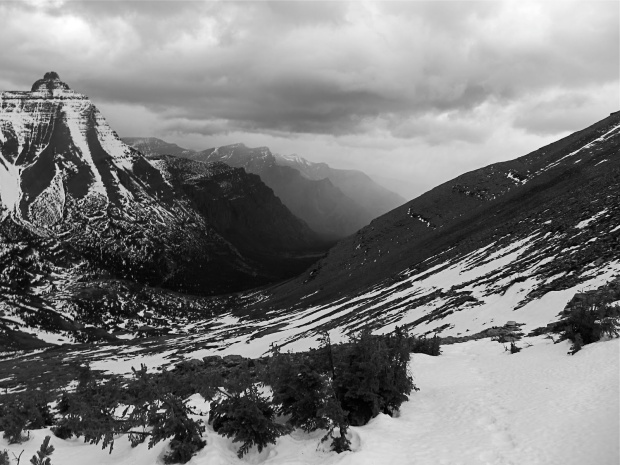 More recently, I can’t think about this trip without scratching my head at how close things could have been on day two.  We had only been in the Flathead a few months, and in early November there was plenty of snow, plenty of precipitation in the forecast, and not much daylight.  I determined that M would drop me in Two Medicine Saturday morning, and pick me up at Lake McDonald Lodge Sunday evening.  Right around 60 trail miles separate the two, and back then I had hiked exactly zero of them.

Day one went well, with some hairy drift busting up to Triple Divide Pass, and hiking well into the dark to camp on the shores of St Mary Lake, where the wind played havoc with my shelter and my sleep.  Shit got real on day two, heading up to Gunsight Pass, which wasn’t hazardously snowed-in, but was totally invisible in the rain.  I found the little shelter cabin at the pass by braille, and got into my (thankfully synthetic) sleeping bag to make my last tea and warm up.  I was already wet, and already wearing all my clothes save an extra pair of socks.  Snowshoeing through the slush was draining.  Those familiar with the traverse of the Lake Ellen cirque, especially the cliffy bit up towards the little pass over to the Sperry basin, can well imagine the potential route finding pitfalls.  The trail was invisible, and only an intuitive sense of the invisible abyss down to Lincoln Lake sent me in the right direction.

I had a Spot by then, and could have holed up in my bag and tarp had I got into a dead end, but with the weather no help was coming quickly.  The only solution was to keep moving, and thankfully years had educated my intuition enough to find the way.  A more detailed topo, which I did not have, would have been good insurance.

I sure thought about rescue during the 2011 Wilderness Classic, and did call for a non-emergency bail in 2012, which as I’ve detailed elsewhere was mentally and physically the right thing to do.  My big take-away from both Classics is that having a sat phone and the infrastructure to support flying out makes bailing a whole different game, psychologically.

My lessons from considering all of the above:

In the last five years I’ve either gotten a lot better at staying out of trouble, or haven’t been pushing myself as much.  Probably both.  My resolution for 2016 is to both stay safe, and have a few more epics.