Last night I finished up an article about the current state of bikepacking, which gave me cause to do a little research into the current state of mainstream mountain bikes, a subject I typically all but ignore. Naively, I had not realized that the considerable technological innovations of the last 4 years had gone along with and presumably contributed to the rather drastic rise in bike price. You can still get a very nice bike for 1500 dollars, but it seems that 4000 has become routine and 7000 far from unheard of. While I’m sure the likes of Specialized and Santa Cruz aren’t gouging the consumer (too much), it’s hard to get excited about such developments. First, because I’ve made life choices which makes it very unlikely I’ll ever choose to prioritize my finances in such a manner. Second, because I’d rather see the companies putting energy into affordable, long-lasting components (not necessarily linked to #1). Third, because I think the learning value of tricked out mountain bikes makes many innovations a very poor value.

In 2006, when we moved to Arizona, I had a cross bike and a rigid singlespeed 26er with v-brakes. When we left two years later I had a rigid singlespeed 29er and a geared, full suspension 29er. Today, I still have that same 29er, still set up about the same. The fully got traded for a fatbike a few years back.

When I concentrate on the details, those two years in Arizona seem very long. I learned an enormous amount about mountain biking, because I rode a lot. Having big wheels, disc brakes, gears, and especially suspension was a solid catalyst for learning, and made me a better rider. At the moment I have neither (shiftable) gears nor suspension on either bike. I don’t ride that much anymore, and more significantly none of those things would further my learning at this time.

Technology makes you better at things, of that their can be no doubt.  When I first rode with a suspension fork a number of things, especially technical climbs, which had previously been challenging were suddenly trivial.  This winter and spring I’ve been back on the sharp end of that learning curve, with my skis.  Tech bindings and the associated boots, along with better skis, have made me a much better skier today than I was 4 months ago.

If the goal is to become as proficient a skier or mountain biker (or whathaveyou) as possible, buy the best stuff immediately.  If the goal is to have a fulfilling learning experience, you’ll probably end up with top-end stuff, but being in a rush to spend lots of money might not be the best approach.  I rode much harder stuff in the first half of 2008 than anytime before or since, and having pushed myself on a fully for the second half of 2007 made that possible.  A lot of that hard stuff was on a hardtail with a suspension fork, and the increase in skill over two years before was in the end fairly modest.  Most significantly, it was no more enjoyable or satisfying.

Skiing this morning was an ideal demonstration of the non-linear relationship between performance and satisfaction.  The cool spring has kept the snow up at the ski hill in very good shape, and variable weather every frickin weekend has made quick runs locally hard to pass up.  Great training, great skiing, and easy to run back home if a rainstorm catches and soaks you.  Today I got pelted by hail as I climbed up into poor visibility, only to top out, rip skins, and right as I pushed off have blue skis open and be able to arc perfect turned down a few inches of fresh over a solid crust. 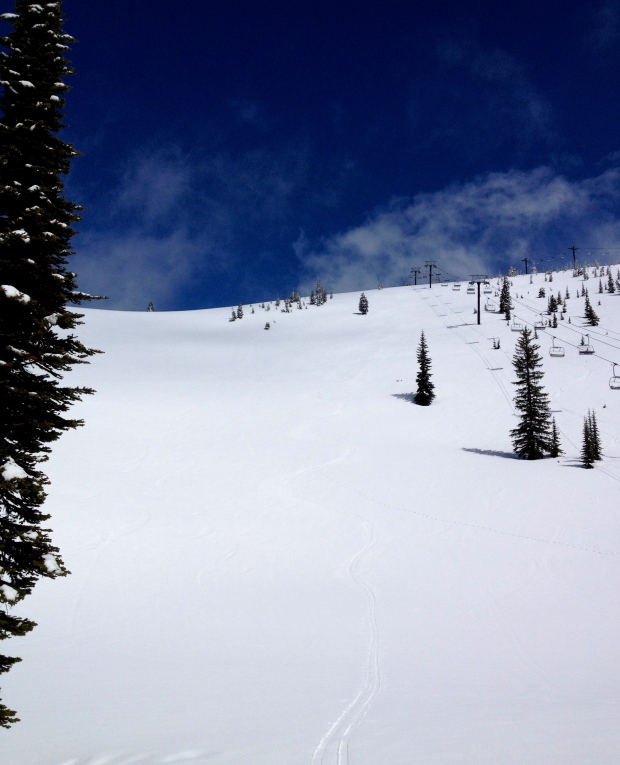 It’s only recently that I’ve felt able to attack slopes like this on a consistent basis with as much control as a want, a development linked closely to having a locked heel.  Was this the best skiing I’ve done this year?  Probably.  Is it the most satisfying, either this year or ever?  No.  There have been plenty of days out flailing with glorified XC stuff which were more memorable, but none that were more enjoyable.