The three does were headed up the slope away from us, in full and easy view amongst the scattering of dead trees. I motioned M and Little Bear to stay put and worked to close the distance, bent double and walking a little farther than perpendicular to the animals. They certainly knew I was there, but at this distance and with a lumbering strange creature not moving any closer, seemed unconcerned. After fifty meters of this the visual line between us was separated by a thick, tall pine, standing dense and alone between the sage slope and an old pond. I stood tall and scampered all the way to the base of the tree, directly towards the deer, before resuming my attempt to mimic a grazing non-biped. Another 50 meters of this and I had curved around, putting myself on the flat and significantly closer to the deer, still aware, but uninterested. Though not alarmed, they were also not still, and heading up and over the top of the hill at a relaxed, steady pace. Once on the other side they’d probably end up in dark timber well before we could ascend the snowy hill, and rooting a group of three mature does out of such crunchy cover was improbable, especially on a bright, still day, the last of hunting season.

So I set up prone and shot. Guesstimating 300 yards, I sent my first shot into what I later figured (after digging a bloody wad of hair out of the snow) out was the most convenient does front knee, which caused staggered confusion but no running deer. So I shot again, a quartering-towards shot which nicked the liver, tore hell out of the guts, and for human consumption ruined the lower third of a rear quarter. This obviously wounded the deer and separated it from its companions, who went slowly uphill as it staggered down. It did not collapse, so I kept firing, logging a further four shots, two of which ended up being hits, neither particularly good. At long 60 seconds last the deer bedded, then rolled over down the steep slope and came to rest behind a log, visible only by the head lolled below and the grass which twitched as the doe took far too long to kick itself finally out of life.

Shaken and paranoid, wanting to make impossible amends, I watched through my spotting scope until the deer had been dead still for minutes.  M, carrying Little Bear in a front sling, set off for the hill (below) as I searched the snow for a disconcerting array of brass.  The butchering situation was comical, M sitting with feet braced against a log, feeding and changing diapers with constant vigilance against the slick snow.  The doe was huge, I could barely turn it as I boned out the meat, keeping the body carefully balanced in the middle of the stump.

Point being? Hunting could not be as profound as it is without also being perilously close to the edge of disaster, and when the laws of large numbers intersect with human fallibility, things go wrong.  We already know that social media, some forms more than others, tends to promote the sort of selective narration which is one narrow shadow away from plain lying, and it seems to me that hunting is particularly guilty of this.  It’s hard enough to publicly tell yourself you didn’t perform up to your capabilities and expectations, more difficult it doing so when the immediate result it causing an animal to suffer an overlong death. 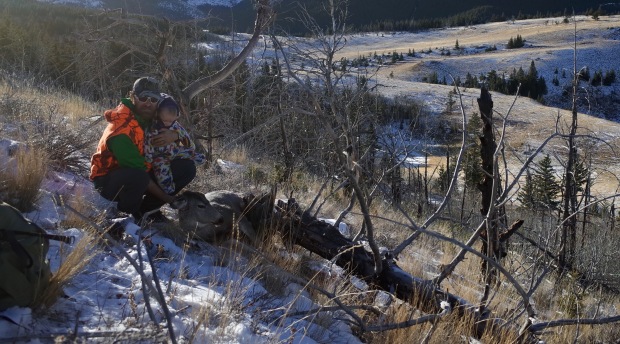 Review and introspection serves no purpose if the facts are pre-altered, so I’m not sparing myself now, or in the future.  I did plenty of things right while out in 2015, but I did plenty wrong too, and the most weighty (if not most significant) was my shooting.  I can shoot very well at 300 yards, and even a bit further, but not nearly often enough.  Resolution number one for 2016 is to be comfortable at 500 yards how I currently am at 300, and as good at 300 as I am today at 100.  This will require a few equipment upgrades, and a lot more deliberate practice.

Resolution two is to be more patient and deliberate.  I’m as certain as one can be of the hypothetical that with a little more sitting in the snow, I would have shot my first elk back in mid-November.  I would have also filled a deer tag earlier with a minutes more patience, but that would have robbed me of the successful hunt with Little Bear, and I wouldn’t take the bargain, ever.  Resolution three, to be more decisive and confident, could be in direct contradiction to number two.  I’d have killed my first black bear with a slightly better approach, and that will stick in my mind for quite a while.  The real answer here is that hunting will always demand a discordant, immediate blend of both of these things, and it’s inevitable the blend will go wrong occasionally.  That I got it so right twice this year is a source of pride.

My biggest source of pride and by far biggest accomplishment this year is in my planning, which was consistently successful or potentially successful (spring bear and elk are still a struggle).  Careful research and a mental leap made New Zealand a trip I expect to not be equally any time soon, and while I was sad to end my September deer hunt so soon, I found game sign and then game exactly where I expected to.  Given how many days I spent two years ago hiking around the Bob with hardly any game spotted, and the tenuous progress in finding animals I made last year, multiple success in this most important side of hunting was welcome.

I have few regrets, aside from my lack of patience with elk and my missed instinct with that black bear.  One was going down to the Madisons last month to hunt elk in the first place, chasing the better odds of a cow tag and higher numbers rather than sticking to the Bob closer to home.  There are indeed plenty of elk in the Madisons, I saw hundreds of them hanging out in farm fields between Ennis and West Yellowstone.  For something as significant as hunting, and especially as my multiyear elk quest, the how is as important as the thing.  The frustration of being shut down by private land highlighted this.  Next year I’d rather fail to kill an elk in the Bob, where human alterations to the landscape alter their behavior minimally, than shoot one anywhere else.  And that will be priority number one for 2016s hunting.

My other regret is not having much in the way of difficult packouts.  With everything between 3 and 5 miles, my learning in that area didn’t go far in 2015.  Next year I hope to shot at least two critters 15 or more foot miles from the car.

Over a year from what is still my longest packout, it’s illustrative to contrast the total beatdown that put on me with the fact that 2/3 of the distance with a similar weight was no big deal this year.  I have lots of physical progress to make in this area, but it is obvious that with proper training big mile packouts with a whole deer and gear are very possible.  The Seek Outside frame I used this season, and the variants with which I experimented, worked well.

A few clothing and gear items need work.  The Zamberlans totally lost waterproofness by late September, such that they made November elk hunting in snowy single digits temps (F) a rather nasty experience.  For next year I reckon something like the Boulder Mids, but sized up for sock layering, will be the way to go.  While I think it must be possible to build a fabric/laminate waterproof boot, my experience with them has thus far been universally poor over the long term.  As is the Zamberlans are ready for the trash, and still have plenty of life left in the rubber.  Sad.

Insulation also remains a challenge for backcountry hunting.  Having enough warmth for sitting in temps below freezing, that can manage internal and external moisture, adapt to start and sit activity, and not weigh a ton is a hard thing to balance.  A two layer system is I think inevitable for this, with the combo of a lightish down jacket and something like the Rab Strata is the most promising avenue.  My Strata lost its sleeves in early October, and in the process went from pretty handy to in almost constant use.  The Kuiu Kenai also intrigues me.

I upgraded my spotting scope this summer, to the Vortex Razor 50mm, and have been glad I did.  There are limitation inherent to 33x magnification and a 50mm objective, but unlike the Minox I had before the Razor is dead sharp and bright all the way to the outer limits of its capabilities.  I can see investing (a lot) more money in a large scope down the road, but for backpacking without too much attention to the particulars of antler/horn size this scope is a good way to go.  In the absence of a mounting collar which rotates the straight, rather than angled version, is the way to go, and also packs easier.  Only knock thus far is that the objective cover is too loose, notice the duct tape used to tighten it such that it stays on while packed.

Most importantly, I can’t wait for next year, primarily next fall, and have been weighing options since this summer.  I’m already in deep, as far as plotting tag drawing strategies and having backup plans.  Hunting is complex enough that three years is barely enough time to get started, and this depth along with the limited time one gets to do it guarantees obsession.  The profundity of it all is good for fostering evangelism, so naturally I’m most proud of having gotten Little Bear out on two successful hunts.  How he’ll be able to come along in the future will always be a big part of an already complex planning puzzle.