This is not a business

But I am asking you to buy things.

Back in 2010 the end of grad school and move to a new place, with what was finally and undeniably a real job, properly prompted introspection.  One prominent result was upgrading this blog to WordPress and taking it far more seriously.  What I’ve gotten from that commitment has been priceless; a sporadic freelance writing career that has brought both money and interesting projects, collaborations with publications and companies testing and refining outdoor gear, a far more nuanced understanding of myself, and most significantly a community of readers whose depth of commitment and breadth of background never fails to amaze me on the relatively rare occasions when it and I come face to face.  I’m an introvert, something I only poorly understood and could not embrace 7 years ago.  If I wasn’t, I’d probably spend less time writing to and for intimate strangers and more time face to face with strangers in living rooms and bars.

These intangible benefits could not have been purchased in any way other than time and concentration invested over years.  I’ve never made a cent directly from Bedrock & Paradox, and aside from writing gigs for other publications no secondary income either.  To be mild I’ve never been a fan of crowd sourcing, affiliate links, native advertising, and so many of the trappings of our current age.  I like working for a living, doing actual things, getting money without sleight of hand.  I’m also not comfortable asking for donations or doing any kind of subscription service.  On the one hand I’m small potatoes and monetizing in that way just seems insulting to you, the readers.  On the other, there are more demands on my time than ever, something which isn’t going to change, and there are some projects I’d like to push forward now, which require additional funding.

So this is the compromise, three stickers designed by my lovely wife M, the shadowy figure which has made so much of Bedrock & Paradox possible since the beginning.  We’re selling them for $1.50 each, with graduated shipping charges for US and international buyers.  I won’t make too much money on each order, but I will make some, and all of it will go directly towards equipment necessary to get the next phase of Bedrock & Paradox off the ground.  They’re the best vinyl stickers we could find, the samples having survived many rounds in the dishwasher.  They’ll last quite a while wherever you decide to put them, and will hopefully both help us out while both giving you something of substance and making more explicit the bond between reader and author.  Because as ornery as I often am, I wouldn’t keep doing this without knowing I was reaching who I am.

As an additional thank you for investing, and for accompanying us over the years, we’re holding a pack giveaway.  One lucky person will get custody of the most recent version of the 610 pack, shown below and detailed here.  It fits a ~20 inch torso, and will come with shoulder straps, foam pad, and hipbelt.  Pockets exist for dual stays, but you’ll have to supply those.  Full details can be found on the sticker page or the new Bedrock & Paradox store. 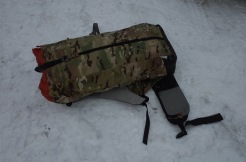 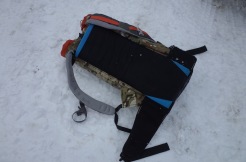 Why isn’t this a business?  Because I don’t want to make money, I want to do things, and doing those things happens to require a bit more capitol than we currently have ready access to.  Making money requires compromise for the sake of efficiency, scale, and sensibility.  Long term I have no interest in those things, only in making exactly what I want to make, as best as I can make it.  That is what the stickers exist to fund, and that is what you’ll be voting for if you buy some.

29 responses to “This is not a business”