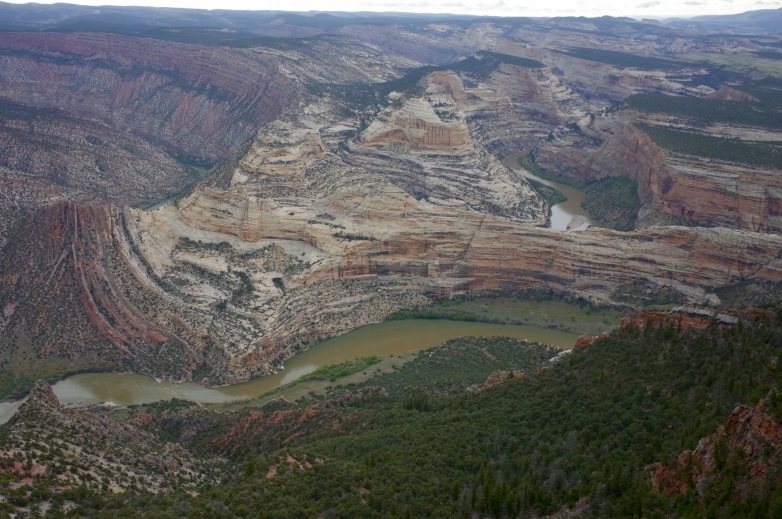 The water would have been right up there.

It’s a thought that hovers 500 feet overhead and permeates what would otherwise be an overly lucent place, a pinch of silt dissolved in a pint of champagne. 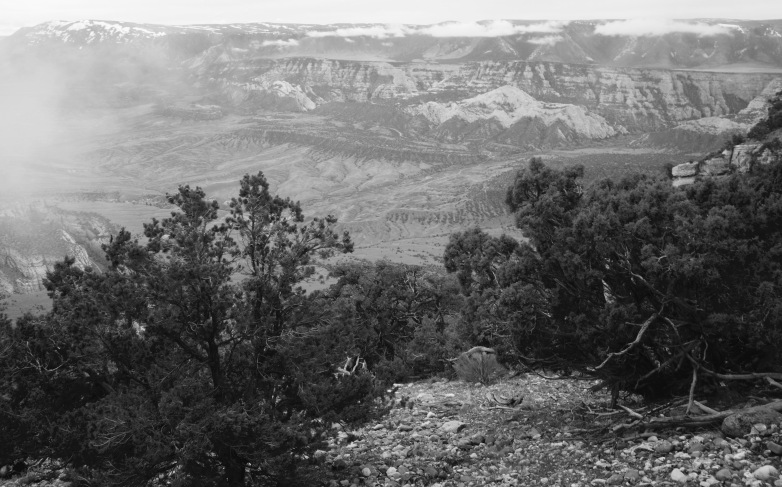 Echo Park was named by Major Powell, and might have been the first occasion for the 1869 river trip to contemplate the Colorado Plateau.  Dinosaur National Monument lies at the very edge of the geological zone which Powell did so much to enlighten and define, and comes I assume fairly late in the explorations of most contemporary canyon rats.  I’ve lived on the plateau for years, all told, and spent collective weeks in the Escalante and months in Canyonlands before the idea occurred to drive north and see where the Yampa flows into the Green. 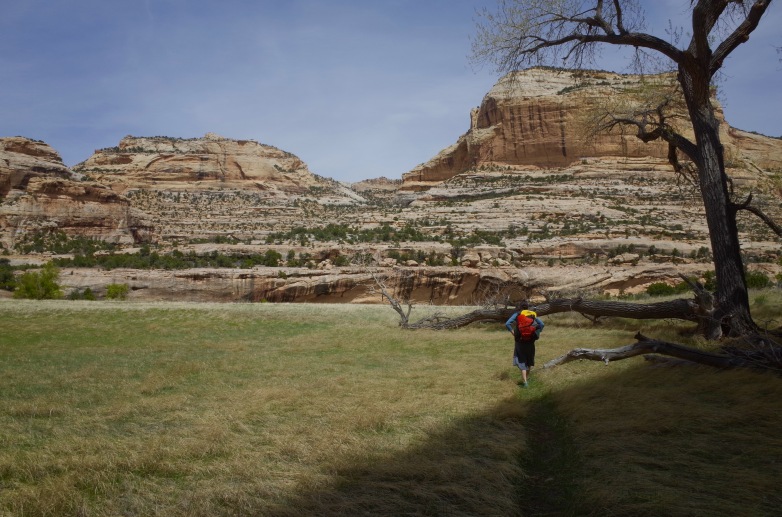 All the constituent elements of the Colorado Plateau are there; varnished walls set in Euclidean opposition to river and plain, side canyons of disorienting dimension, and slopes where sand and green are the prominent exception and routes up and out stand soaked in doubt.  There was some premeditation in visiting now, assumption that a healthy winter would just be seguing into a fat and pellucid spring.  A, or perhaps the, foremost charm of any place in the Colorado Plateau is the extent to which any given vista is easily shown as undefinitive and inadequate for any inquiry concerning human understanding.  Echo Park excells in this, and by the time we left I was feeling grateful indeed that the canyon of the Green had so much relief, in which we could float and on which we could climb and sit and look, and by which we could begin to see where we had been and how we had got there and the way in which the one was connected with the others. 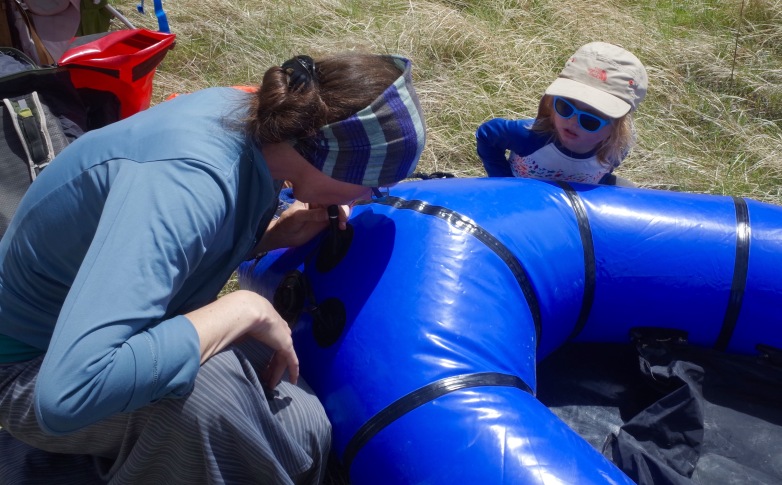 For all that, Echo Park is also tainted, it’s presence like that of bison in Yellowstone a reminder of what does not and will never exist again, fully.  David Brower invented modern enviromentalism in his fight to stop the Echo Park and Split Mountain dams, and infamously rued the bargain which had Glen Canyon Dam and Lake Powell created.  Regardless of your opinion about the ethics of opening the heart of the largest functional wilderness in the lower 48 to unrestricted traffic, one must admit the irony of naming a totem of questionable water policy after the major.

The law of the river gives 1.5 million acre/feet of water to Mexico each year, and it is now common knowledge that all of this is diverted to agriculture and that for decades none of it makes it more than a few miles beyond the border.  It is less known that the presumptive overall average yearly flows of the Colorado, upon which the Law is based, have proven optimistic.  Or that Arizona, whose land contributes flow to the river, has claim to almost as much water as Colorado, where the Colorado is falsely though to originate.  Arizona only rarely uses all of the water to which is has title, and then only by elaborate schemes which involve an aquaduct hundreds of miles long and stations which store surplus water by injecting it into the ground.  Or that California, whose land contributes no flow at all, has long used more than it’s legal share, which is bigger than any other (state, country, or tribe).  Two decades ago, when drought and growth threatened that excess, a crisis (for LA and Imperial Valley farmers) was only narrowly averted.

The sheep (above, center)  appreciate that their ancestors got off lightly.  As does LB and his new slot skills.

Our timing at the cusp of spring payed us back, with shades rarely seen in canyon country.  The campground, hidden in the cottonwoods at the end of that impossible road, was a throwback to an era before Mighty 5 marketing and a US population north of 250 million.  Twenty two sites, six dollars a night (before the water is turned on), gravel parking pads with plenty of grass, and almost no one else there even after noon. 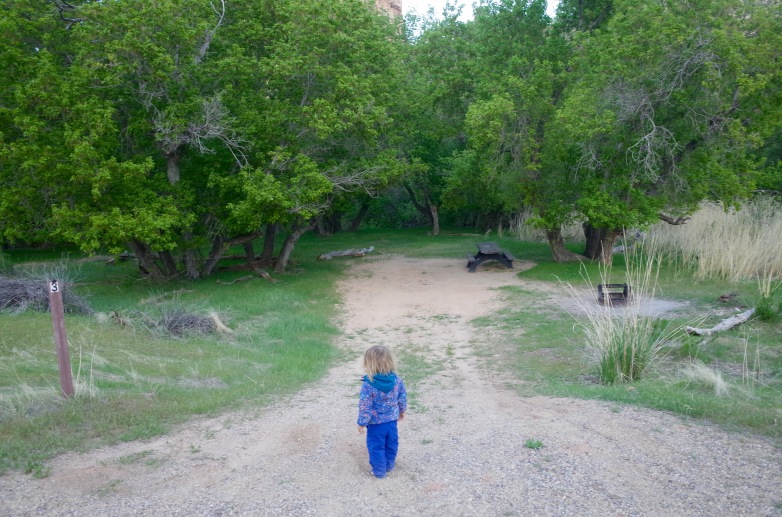 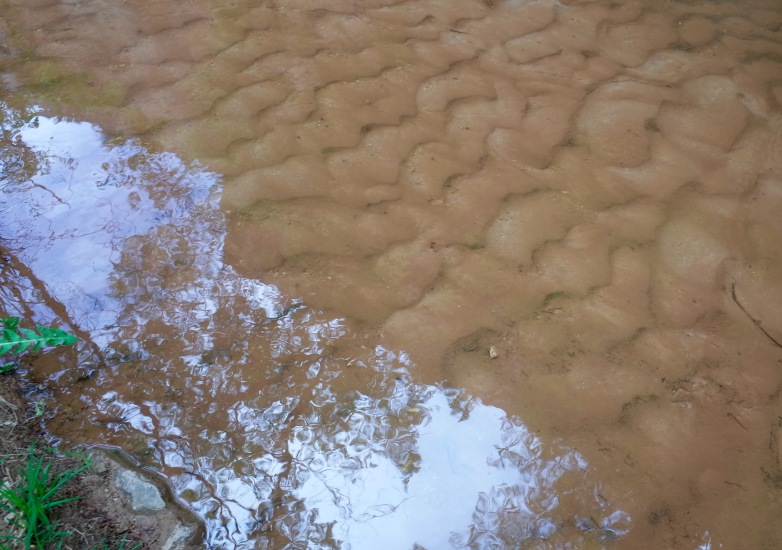 The Yampa was flowing wide and brown and imperturbable into the milky green Green, the two rivers taking uneasy miles to fully mix.  This contrast highlighted the tension which fogged the whole day.  As the only major tributary of the Colorado to be (almost) undammed the Yampa is an uneasy companion to the Green, which is the actual origin of the Colorado and whose neutered state was plain to see in the dam-fed color.  Having driven miles to be there at all, and artificially speeding from canyon floor to rim out of whimsy only, I left both grateful to have seen Echo Park in such rare form, and with the distinct suspicion that I was part of the problem.