I’ve written a lot, indeed too much, about the ideal backcountry packraft, and the extent to which the market has continued to drift further towards putting backcountry and sidecountry whitewater front and center.  The new boats are amazing, and will in the next five years help reinvent remote whitewater paddling.  But that isn’t my primary interest; I want a packraft that is light, small, and capable of moderate whitewater, but is also capable of carrying a good amount of extra cargo, making good progress across flatwater into a headwind, and most importantly keeping me warm and dryish in bad weather.  A boat like the 2015 Yukon Yak with a whitewater deck (second from left), does all of these things very well, but weighs north of 7 pounds and takes up as much space as a weeks worth of food. 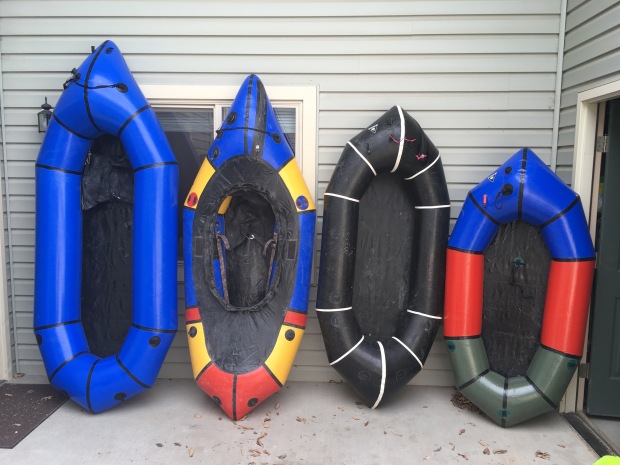 There have been too many trips over the past half decade where my big boat was too much weight, but the Scout (far right) was a bit too little.  The Scout can handle a lot bigger water than most think, in that you can move it around perfectly well, but you’ll get very wet, and additional cargo like a bike or even an especially heavy pack is a non-starter.  It’s awesome that Alpacka managed to shave a full pound off the Scout in the latest iteration, but it’s now more firmly a performance alternative to noodles like the Supai Matkat and Klymit LWD than a lightweight wilderness boat.

The now-discontinued Curiyak, second from right, is pretty darn close to the ideal wilderness boat.  It provides a bit more interior room than the Yukon Yak, and as I found out the other week a 70+ pound pack on the bow works just fine, though it is close to the outer limits of what I’d want to use on any kind of moving water.  It doesn’t come close to the whitewater power of the main line boats, with their big sterns and rocker, but for the sort of things I prefer to run onsight, solo, and 20 miles from the nearest pavement it does just fine.  The main shortcoming, other than Alpacka not making it anymore, is the lack of a factory spraydeck. 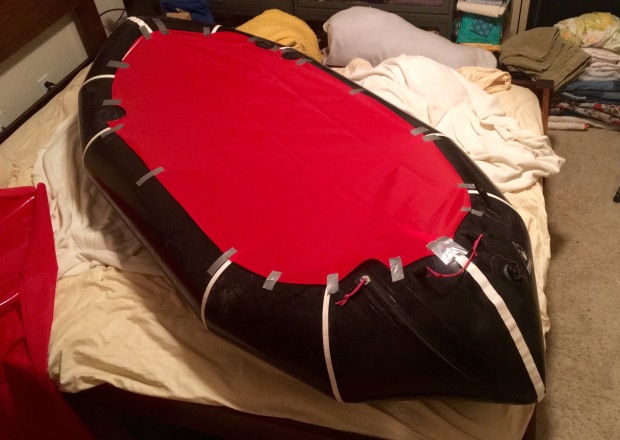 I started with a few yards of 40D urethene fabric from DIY Packraft.  Cut and tape carefully to fit around all the tieouts and zipper, put it coating side out for better water beading, then carefully cut a center slit and round cockpit hole, sew in a skirt, then sew a long velcro flap to both pieces, and a drawcord around the hem.  Seam seal with Aquaseal.

Adhesion is done after sewing is done, with a big roll of clear Tyvek tape (field repair tape, from DIY packraft) and a big (8oz) tube of Aquaseal.  Carefully tape the deck down to the boat, while the boat is fully inflated.  Take care to stretch the deck enough, but not too much.  I messed this up and had to glue a fold.  Once the taping is done (I used two layers all around, it is time to glue.  Aquaseal only cures when exposed to oxygen, so getting it to dry fully is key to strength.  I put a thick bead along the inside, between deck and boat, with the boat half deflated, then carefully let it sit with that seam folded open for 4-5 hours, until the Aquaseal got non-tacky, then fully inflated the boat to compress the adhesive between the two fabric layers, then let that cure for a further twelve hours.  It took 6 sessions to get the adhesive applied all around, which made the whole process take 5 days.

Whatzitweight?  4 lb 9 oz; including deck, cargo zip, and extensive floor reinforcements from the previous owner.  This does not include a seat.

I’ve been waiting for the tape/glue job to fail, but under modest use over the last four months it has held up perfectly.  The deck is similar to what Alpacka was making a decade ago, and does leak through the velcro, but is simple, light, dry enough and warm.  The 40D heat-seal urethene fabric is perfect; durable and stiff enough to stay put, without adding too much weight.  Too bad the ripstop DIY is currently carrying is not the same stuff.  Initial impressions are that the construction method, materials, and design will do quite nicely, and the boat will be ideal for a whole lot of stuff.  When I had to carry a full critters meat along with all my hunting, backpacking, and boating gear all in one load the 3 pounds saved was most welcome.

Part of the weight savings with this boat is due to the Vectran fabric, which is remarkable stuff.  It’s good to see Alpacka using it across their range.  Unlike the traditional fabric, Vectran has a hard stop point when you’re inflating it, and does not stretch at all once full.  It makes the boat noticeably more rigid, and thus faster and better under load.  Non-stretch, black fabric is a bit of a scary combination if you have your boat out of the water under bright sun, but for those looking to invest in a new boat, the weight savings and extra speed might make Vectran worth the cost.