This was the closest I came to writing a 2018 in review post.  I didn’t avoid it because I wasn’t happy with the year, nor because I struggled from within the fog of the moment to sum it all up, but because I was worried about the year which was to come.  These fears were far more justified than I could have understood 365 days ago, and if 2019 remains the most difficult year of my adult life I’ll count myself fortunate. 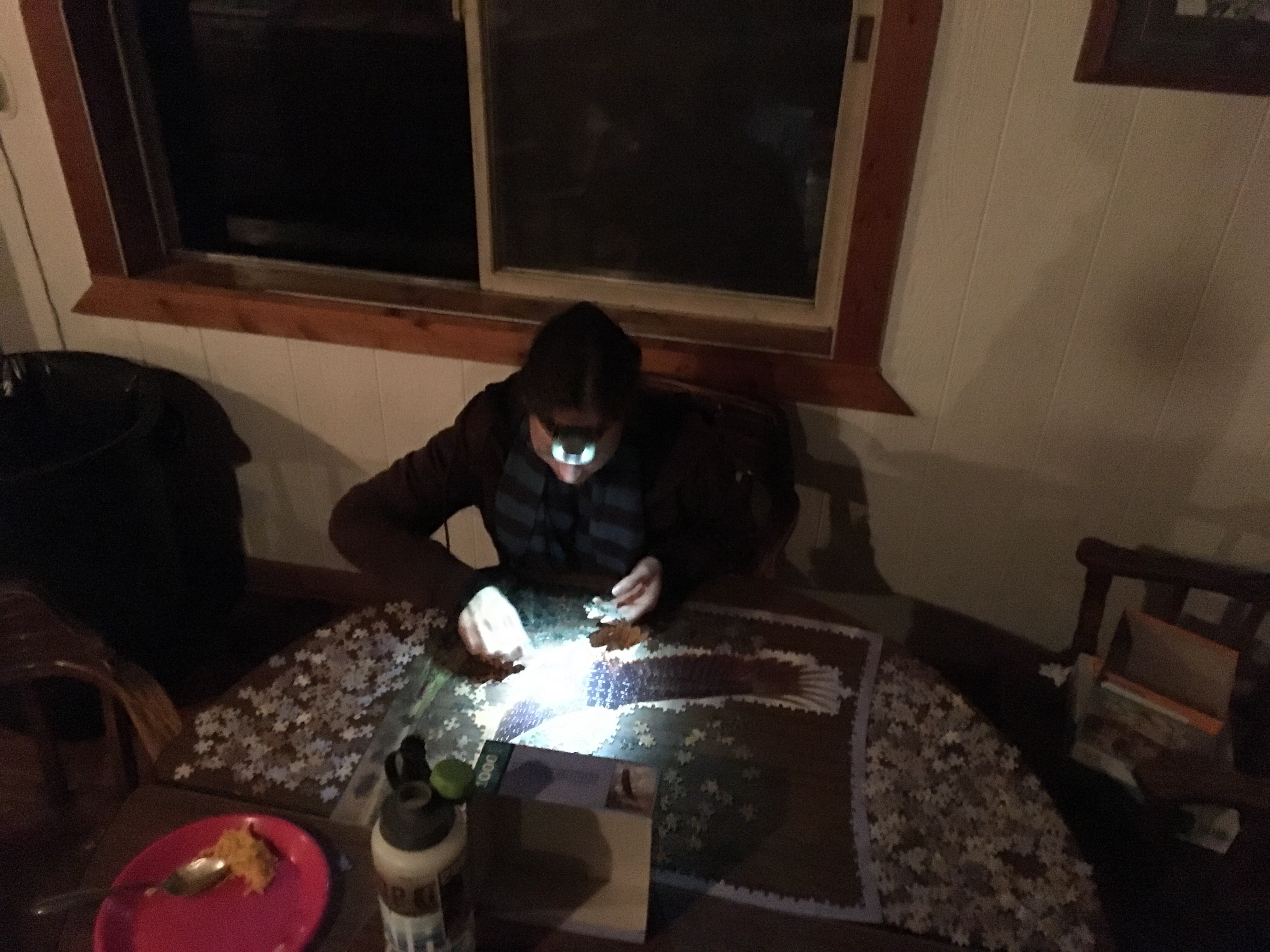 In the empty days before kids, jobs, and the ambitions which birth full onset adulthood M and I often went to a Forest Service cabin for either Thanksgiving or Solstice.  We’d always bring snowshoes or skis or a boat or whatever gear conditions suggested, and in the beginning went in with considerable ambition.  This was quickly blunted when more often than not we’d spend 3, 4, even 5 days and not go much beyond the buildings orbit more than a handful of times.  I’d chop wood or hunt rabbits for exercise, but mostly we slept, read books, did a puzzle, cooked, and generally did as close to nothing as preference allowed.  Our souls caught back up, often only just, and that was before the unending haste of parenthood.

That haste, that lack of free interpersonal air, is what I struggle with most as a parent, and it’s lack is the last thing I still regularly miss and morn.  For a bunch of reasons I went into the New Year’s holiday last year more depleted than usual, and exited it without substantive rest.  Work continued to be hard, M continued to work evenings, and I tried and failed on a major ski trip, due to inadequate preparation.  A few weeks after that, having perculated in the stress and all the questions about the future which it birthed, the bottom fell out.  I came home from an all day training on President’s Day, gave M the keys to the gun safe, and told her to hide them somewhere I’d never be able to find. 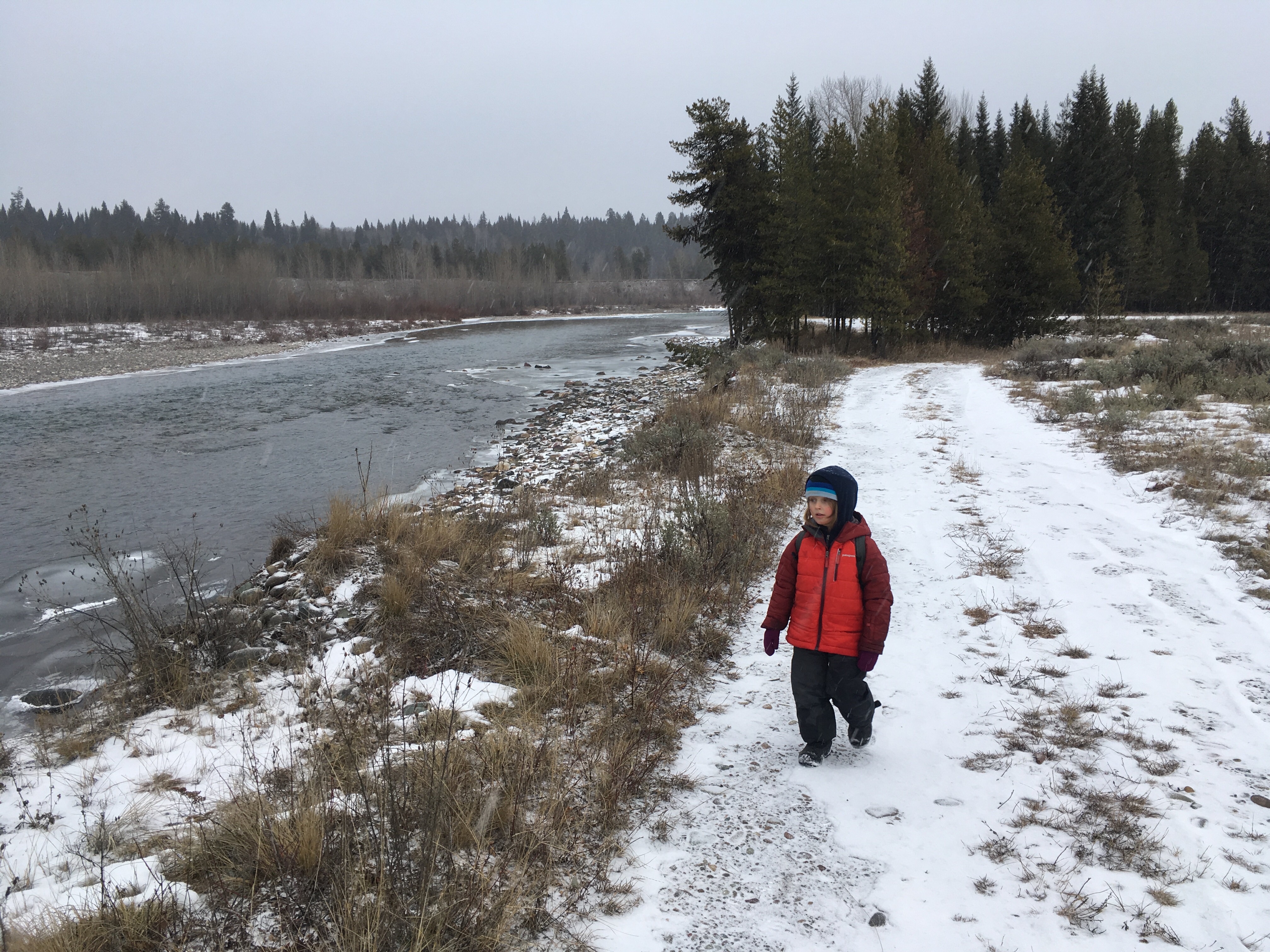 The next weeks, really the next months, passed in a clouded morass I still find difficult to remember.  I just looked, and am still shocked I wrote one post here in April, and nothing at all in May.  I asked for the key back at the very end of March, when I finally trusted myself to be away from home overnight, floating the lower Dearborn, and shooting a few squirrels.  That, and the Maah Daah Hey trip in early April, resorted home in the most general fashion, but instinct kept me hunkered close to to myself until well into June.  I hadn’t given up those keys because I was explicitly worried I’d be tempted to kill myself, it was more a gesture of commitment, a daily reminder of what was happening.  Even if that period of depression passed in 5-6 weeks, the memory of it still scares me, like very little else ever does.  I’m a professional at all this after all, I counsel depressed teenagers 5 days a week.

Over the summer I got out.  We took the family to the Black Hills, and the Continental Divide, and to Glacier, and things went well.  I did a big trip in the Bob I’d had on the mental list for years, and revisited the top of the Chinese Wall.  I was reassured that no matter how severely and irrevocably I had changed, many other things had not, and that in the future I could be both the fragile thing I now was as well as the thing I had been before, fluid and competent enough to only worry about what was necessary, right now. 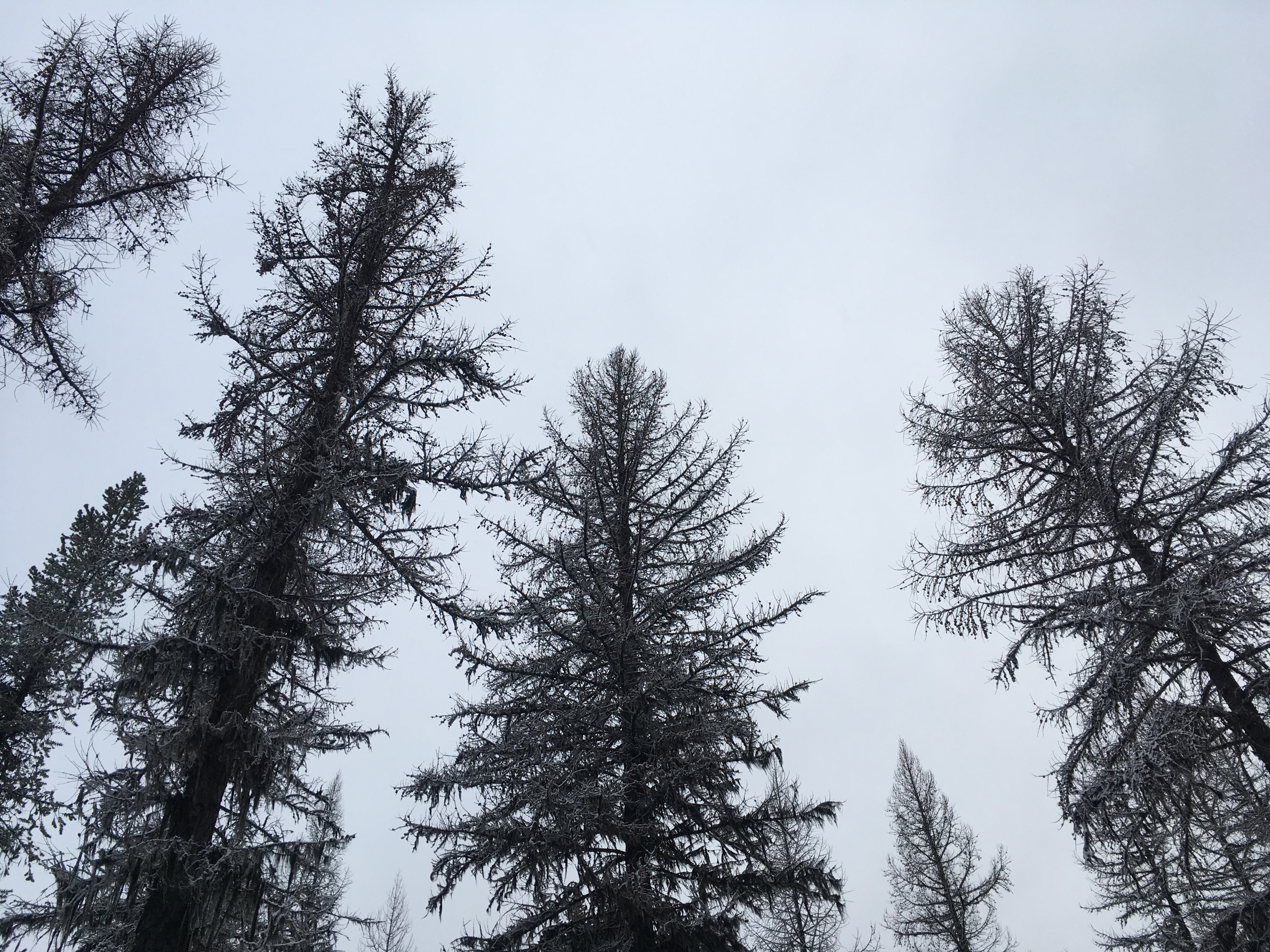 We went back to the woods for New Year’s this year, and though the hours were loud and full of trucks thundering on the wood floor, and worry about the small child staying clear of the wood stove, they were also full and silent, with the larches regally circumscribing the grey sky, snow falling thick and silent, the river whispering in the near distance, immutable.  Little Bear and I put the thin snow cover to use on a loop, packrafting down and walking back, launching off shelf ice and seeing a hundred elk across the meadow.  We walked up a hill, on top of which I saw wolves way back in an October when we had only just moved north.  We passed the cutbank and bushes up which a mountain lion had jumped as I biked by, a 3 month old LB in the trailer.  We backpaddled to stay dry in the same little rapids I’ve floated at least times in the past 10 years, and through all of it I was forced, no, allowed, to contemplate how much I had changed and how little it had changed and how in the difference between those two there was all at once nothing and absolutely everything. 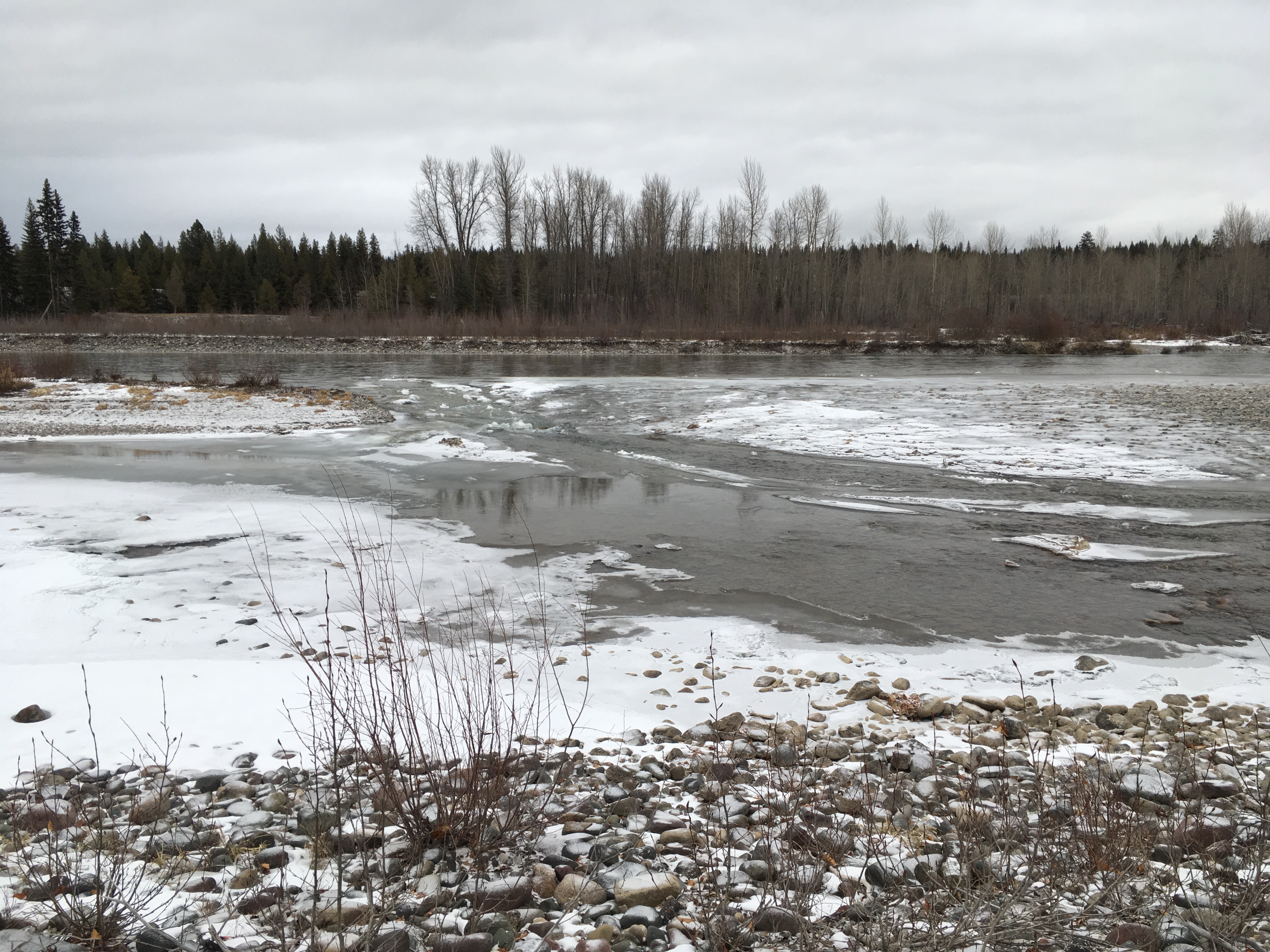 Pondering how a river, a mountain range, a forest can highlight human transience and the fragility of identity is one thing.  A simple and safe thing, in the staid flats of adulthood.  It is something else again post-parenthood, when the ways in which other humans shape your personhood cannot be more obvious.  In the past two years both my home life and my job as a psychotherapist have eroded me, the cobbles of my identity clattering and coming to rest well within sight, but never again within reach.  It’s taken that long too see how that can be a change, and not a diminution. 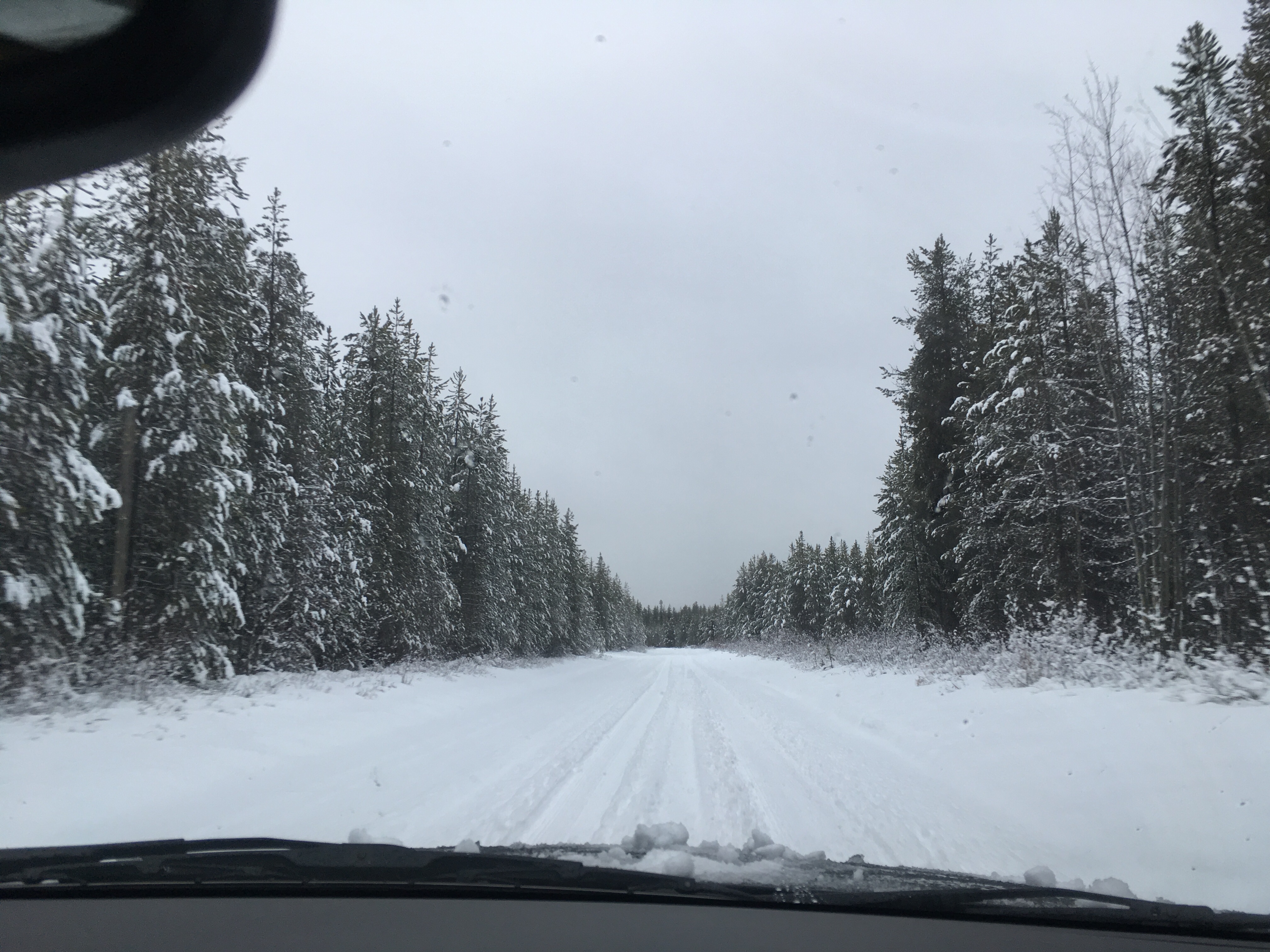 It snowed all night our last night at the cabin, and the hour plus south back to pavement and civilization provided the full spectrum of winter driving, as we drove into and back out of the orographic shadow.  Sticky dense snow gave way to nothing, which gave way to rain on ice and then deeper, heavier, wetter snow on ice.  Engine braking and patience kept us out of the ditch, and towards the end the toddler fell asleep.  Town had no snow at all, and finally the world seemed just as it should.