While I long ago accepted that every new trip in the woods would spawn ideas for 4 new ones, and really great trips would give birth to more, better ideas for the future, I’m quite proud at how few really vital, urgent ideas have remained un-done for years and years.  One of those few, packrafting the Little Missouri and looping it with a hike on the Maah Daah Hey trail, finally happened a few days ago.  The following are my thoughts on what worked, in terms of logistics and conditions, and what I would do differently the next time I visit this singular place.

The Little Missouri originates along the Wyoming/South Dakota border, draining much of the high pine and rock country which segues from Devil’s Tower into the Black Hills.  It flows north through prairie and badlands into the big Missouri in North Dakota.  For floaters this geography is very important; first because the Little Mo generally has two peaks from runoff, one in March or early April from (presumably) the prairies melting, the second in early June from meltoff in the lowish (6-9000 feet) headwaters.  The long term historical average peaks in March at 1200 cfs, and dips in May to 853 before bumping back up (1040) in June.  Dive into this data and you’ll enormous variation, I presume due to highly variable snowpack on the prairie, as well as the potential for a warm spring causing an early and/or protracted meltoff in the headwaters.  Getting high water is not something that can be reliably planned for, even for a broad 2-4 week window.  Second, and to get ahead of myself a bit, the Little Mo is a flat river, and thus a slow one, with the gradient (feet per mile) in the single digits.  If you’re in a packraft on such a river you want as much current as possible.

This winter was very robust in the big empty which spans the Montana and North Dakota border, so I was on high alert for a robust first peak.  This duly happened, with the Little Mo at Medora surging to an all-time high (for that date) of 17,000 cfs towards the end of March.  I was concerned that might be too high, and even more worried that the sticky clay soil which is ubiquitous along the MDH trail would not have dried from the very recent snow melt.  I decided to wait a bit, a little over a week, as circumstances dictated, eventually putting on the river shortly after noon on April 6th.

By early evening on the seventh I was 50 miles downstream, having been dismayed that even my modest expectations (4 mph?) for current had been optimistic.  The 6th had been calm, the 7th only mildly windy, but that was all it took to reduce headway in the 2-3 mph flow to a painfully slow margin.  With the river moving away from the trail in the northern half, I took out at the MDH ford 6 miles north of the Elkhorn Ranch site, and hiked back to Theodore Roosevelt NP. 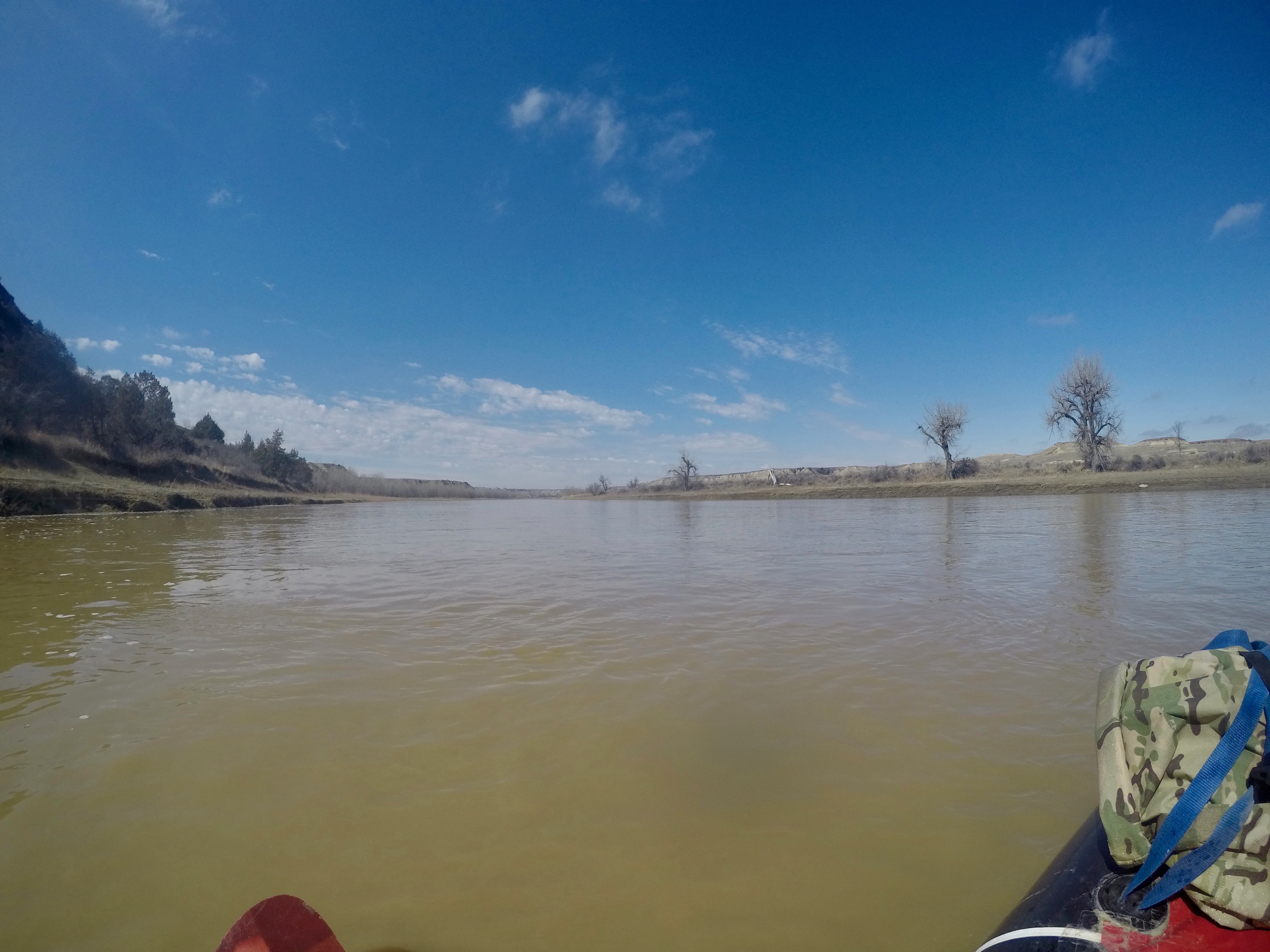 The first thing I’ll do differently next time is consider not bringing a packraft.  There was and is huge stylistic appeal in doing a human-powered, self contained loop, but packrafts have big disadvantages on flat, meandering, and wind-exposure prairie rivers.  A genuinely windy day, like we had on the White Cliffs stretch of the Big Mo a year and a half ago, could easily flip a packraft, and fairly modest, consistent winds (like I had my first full day hiking) can grind a packraft (even a flat, lower one like the Curiyak I used) to a halt.  If I were to bring a packraft I’d try very hard to get as much water as possible.  10,000 cfs would be ideal, and with big water experience I don’t think 17,000 would be too scary (nothing beyond the usual compression waves, sand waves, and submarine log hazard).

Getting those flows at all is tricky, getting them with hikable or bikeable trail is yet trickier. 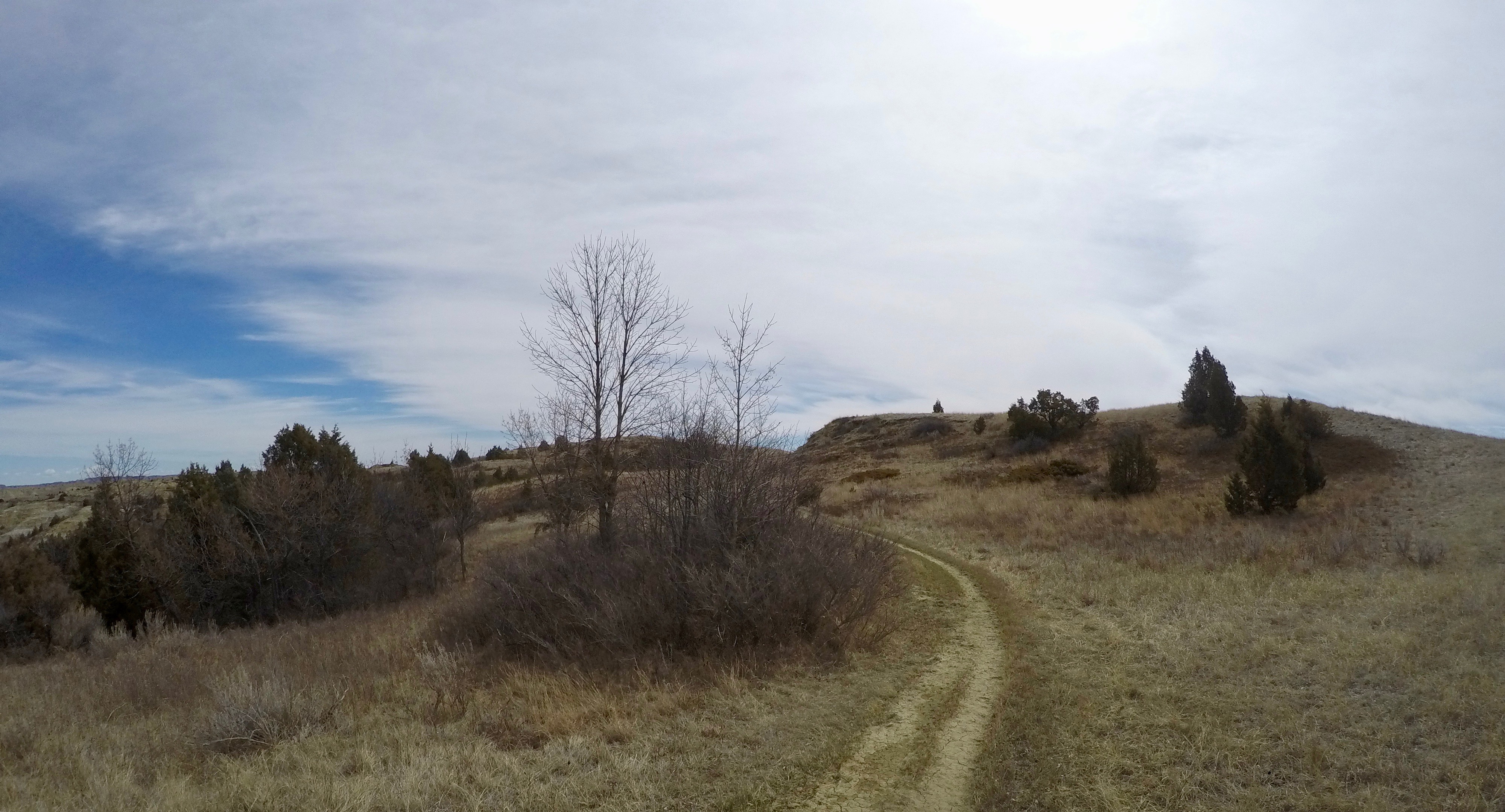 The MDH is a sublime piece of singletrack, and currently spans almost 150 miles along the Little Mo.  When M and I first visited well over a decade ago it was only 100, connecting the two main units of Theodore Roosevelt National Park, which explains my initial and long standing desire to connect those two places with floating and hiking or biking.  The clay soil found throughout the area will be familiar to anyone who has ridden at 18 Road in Fruita, or done any hiking along Muddy Creek in the San Rafael Swell.  When wet it is not to be trifled with.  The badlands along the Little Mo are fantastically corrugated, and hold wind-drifted snow well after spring has happened.  I walked across plenty of drifts, and experienced consistent sticky stretches on damp, sheltered aspects.  When this lasts for 50-100 meters you can clean your shoes and pole baskets and move along.  A week earlier and I think much of the trail would have been unhikable.

I spent a bit of the 7 hour drive east thinking about the stylistic aspects of choosing to hike, rather than bike, what I knew from previous experience to be ideal mountain biking terrain.  I had a pack to test, and though that being on feet would make it easier to manage potential mud, along with letting me bring a lighter packraft.  The final stretch through the national park, with huge 360 degree views and bison for company, is also superior to the Buffalo Gap trail bypass around the park.  In the end I had no regrets, and enjoyed the different dynamic of walking speed.  In the Bob or Yellowstone you spend the better part of a day, or multiple days, traveling up, down, or across one feature in the landscape.  In the North Dakota badlands, you’ll head three drainages and cross a major plateau in the course of an hour.  The rhythm was unique.  I’m quite excited to go back and ride all of it.

Lastly, the impacts of the oil shale boom are very evident along the Little Mo.  I was using the 2005 Trail Illustrated map, which showed one section of the MDH as not crossing a road for eight miles.  There were a dozen (!) road crossings in that stretch.  The whole trip had few moments where one could float or walk for an hour and remain out of site of a well or pump.   That said, it all amounted to something which was remarkably unobtrusive.  Perhaps we’re inoculated to the sight of linear dirt strips.  Perhaps it was the loudness of the frogs at each of the many, brimming full stock tanks.  Perhaps it was the abundant wildlife (bison, bighorns, an osprey attacking canada geese, more mule and whitetail deer and pronghorn than I could easily count) which didn’t seem to mind (no elk, significantly).  With places like the Bob in my backyard it’s easy to be a snob about doing trips which never cross a road, but the Little Mo was a clear reminder that wildness can take many forms.

The place is a long way from almost anywhere, which has and will likely go a long way towards keeping it at least fairly wild.