Sometimes function is encapsulated in a moment.  Back in the day Todd Goss had a solid gig guiding rock adventure courses for guests at the Green Valley Resort in Saint George, which in either of the few locales (Moe’s valley for convenience, the mountains to avoid the worst heat) involved some steep hiking, some easy scrambling, 5.3 toproping, and a gigantic zip line.  Ideal for adventurous tourists with no climbing background.  The rigging aspect was extensive, to say nothing of the gear hauling, as on public land nothing but the bolts stayed in place.  For a brief time I was the chief rope monkey and hauler, which also involved reeling in clients who yarded too hard on the panic handle.  We rigged them on runners long enough that grabbing the rope was not possible, but for psychological support Todd clipped a dead carabiner to length of rope and a wooden t-handle.  The more reactic and acrophobic clients would do a closed-eyed pullup for the whole 400 foot line, which would leave them hanging in space 20 feet short of the ledge.  I’d chuck them a biner on a 6mm line and haul them in like big fish.  It was fun work and good exercise.  Had M and I been able to better rebound from being booted by a very weird landlord, we might have been stuck in the most evil city in America for years.

In any case, my enduring memory from those days was Todd shucking his 50 pound Osprey Vertigo and unearthing a sheef of lockers and pulleys, and a 500 foot 10mm static line.  Since then the Vertigo, with its padded wings, big wrap around zipper, and perfectly organic Osprey geometry has been the definitive panel loader in my mind, with gear intensive day trips like climbing the ideal application.  So when Little Bear and I hit the jackpot at a local gear sale (see above) and found a thrashed Vertigo for free (!) I was beyond stoked.

The little details of the Vertigo are a delight.  Heavy mesh on the back of the stash pocket.  A generously pleated hanging bladder sleeve.  A hydration hose port which goes through a 5″ tunnel in the top of the pack (a little on the small side for many modern valves, granted).  A big #10 main zip with nickle-plated sliders.  Front compression straps which buckle to the sides for maximum squeeze.

The straightjacket design of integrating stiff foam into each wing (red portion) is a fascinating design.  Osprey claimed it thus: “The StraightJacket side panels achieve their maximum stiffness when they are perpendicular to your back. Conveniently, this is when the pack is at maximum capacity and needing maximum support. When the pack is relatively empty, the side panels are designed to fold over each other, like arms in a straightjacket, and lie flat against your back. In this mode, they show a high degree of flexibility.”  This is true, but comes at a cost of weight and bulk, as well as crating abrasion point in the lower edges of the back panel (see below). 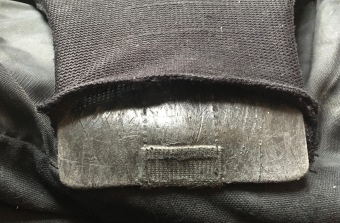 The suspension on the Vertigo is quintessential 00s, functionally similar but scaled down from the 90s Dana Design suspension.  The frame sheet with single stay goes into a sleeve at the top of the pack, and swaps into the lumbar, with the hipbelt velcroing behind.  The 1″ thick piece of cushy open cell foam slides in front of the framesheet.  The major design issue here is the potential for long term abrasion.  Dana managed this with insane reinforcement and a bunch of dense padding in the lumbar.  The Vertigo had neither, and obviously the previous owner put plenty of miles into this pack even after the sleeve was starting to fail.  I wanted to make this pack useable for me, so this is the number one issue that needs fixing. 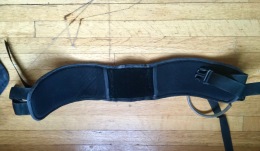 The belt and straps on the Vertigo are perfect, mostly as good as these things get.  The soft fabric against the user has a 1/8″ layer of soft foam laminated to it, with 3/8″ of medium-dense (3lb ?) EVA behind.  I cut the straps off (following section) which allows us to see that even on an 18 year old pack with tons of use both foams are functionally new.  The belt is a medium which is Osprey sizing is to this day perfect for me.  The packs torso is also medium, which is way too short.  This is modification issue #2.

The torso length issue is an easy fix; cut the straps off, cut the load lifters off, sew the first to the second.  The total back length of the Vertigo in medium is 21.5″, the number I would’ve picked had I been building from scratch.  The straps themselves are a bit short, an oddity peculiar to a lot of older packs.  Workable, especially given the quality of the padding.

Making a functional suspension with support the whole length of the pack is considerably more difficult, in no small part due to the swaths of stiff foam in the wings.  maneuvering the pack to get under foot makes for serious limitations.  A single stay with a bit of foam in the back panel provides good load carriage and enough structure.  I could get the top of the back panel under the machine, so sandwiched a layer of 1000D between the layers of fabric to create a stay pocket which doesn’t quite go to the top of the pack, to prevent abrasion.  A small pocket, of double layer 1000D, on the bottom of the belt holds the stay in place when the belt is velcro’d to the pack.  I was able to wiggle a layer of stiff 1/8″ foam into the existing sleeve, and then slide a pocket of 1000D over the bottom, stitching the whole lot to the sides.  This got a bit ugly and was a pain to execute, but got the job done.  I anticipate either hand stitching or gluing (more likely) the bottom of the 1000D sleeve to the exiting lumbar fabric for a cleaner look.

What will I do with this pack?  I’m not entirely sure, but it was both a fun project and a cool addition to the functional gear museum (unlike the brick-heavy Chouinard axe, which will probably go the on the wall.

4 responses to “Rebuilding the Osprey Vertigo”