How the Imlay Kolob works

Sometimes you are in the right place at the right time.  M and I lived in Moab for most of 2004, which was significantly the first spring after Mike Kelsey’s Technical Slot Canyon Guide to the Colorado Plateau was first published.  Prior to this there was plenty of incomplete or tangential beta for technical slots available, but Kelsey’s publish everything and sort out (ethical, environmental, and accuracy) concerns later approach made the first edition of this book the largest single dissemination on the subject that had or will ever be able to happen.  We were in a unique position of being able to both experience many precious places prior to their first publication (a cold November morning busting microwave sized chunks off the wall in the upper forks of Butler, the day after North Wash had flashed to within a few feet of the base of the Hog Springs footbridge) and to have an easy feast of cheap info before the approach trails were beaten in and non-sketchy anchors established (finding Upper Iron Wash with nothing but fresh g-hook holes).  It was a time of great adventure (reinforcing decades-old drilled angles in the Roost, using knot chocks to rap off snow drifts in Echo) with just enough info and good enough online maps to go most places quickly, and enough unknowns to make it satisfying.

We returned home to Moab after eachs weeks adventure to dry ropes on our apartment balcony and repair wetsuits with a big can of contact cement.  Three different packs which had started the year new or close to it were most of the way to their graves by the time we left.

The Imlay Kolob is a curious critter, because it is an unabashed specialist.  Tom Jones retired from a career at Black Diamond (where he designed classics like the gen 2 Bullet and the Zippo), and as a climber, to be a hiker with ropes and build canyon gear out of Mount Carmel Junction.  By the time the hybrid version of his Kolob pack was released around a decade ago, canyoneering had become a mature sport on the Colorado Plateau, with a coherent set of demands.  The Kolob Hybrid was the first and still the most coherent reflection of these.

The bare facts of the Kolob are a basic top loading draw cord bag with a floating lid, fixed shoulder straps, removable hipbelt, load lifters, and internal frame set in a pad sleeve.   Back length (base to load lifters) is 21 inches, while the base to strap measurement is 17 inches.  Top circumference is 36 inches, with a 10 inch wide back panel and sides which taper up from 7 to 8 inches deep.  The 40 liter size estimate is thus rather generous, with  30 liters being in my book more accurate.  The Kolob looses a considerable amount of capacity to the aggressively curved bottom, which makes sense.  For this pack bag shape, pocketing, and especially materials must be suited to the canyon environment.   Otherwise there is no reason to steer away from the old method of buying a 40 liter climbing pack on clearance, putting a bunch of grommets in it, cutting a bunch off, and using it for two years until it dies. 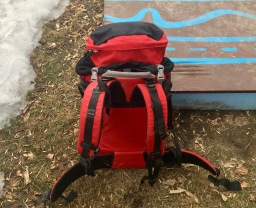 Abrasion and water drainage are the twin demands which separate technical canyon hiking from other disciplines.  Skinny sandstone slots are not just phenomenally abrasive themselves, good and safe downclimbing technical often demands using your pack for friction.  I made a simple bag out of X51 before this trip, and after 36 hours and four short but intense slots it was almost worn out.  Similarly, after this trip the 1000D main panel of my pack had a number of holes.  Point being; no single layer of fabric is tought enough for Colorado Plateau slot canyons, mainly because harder objects (bottles, roles) within are an inevitable subject of point abrasion.

To this end the Kolob not only has a radically upswept bottom, that bottom has three layers; holey PVC on the outside, closed-cell foam in the middle, and heavy mesh inside.  The rest of the main body is also two layers, mesh on the inside to hold the weight and expedite drainage, and either PVC or Cordura on the outside for abrasion resistance.  Double layer fabrics, with the inside layer ever so slightly undersized, makes for a massive jump in abrasion resistance, and the Kolob uses this approach in a way which guarantees no water in held in the pack, even if you use it as a kickboard for a 150 yard swim.

The downside of this approach is of course in added weight, with the Kolob weighing over 4 pounds.  Not a huge deal for a technical day pack that might easily be loaded with 30-40 pounds of rope, wetsuit, hardware, and drinking water at the start of a big day.  I have no doubt that the Kolob (and the most recent version, which has a bit less PVC) will hold up better enough than other packs to justify the premium.  The question is, does it carry those big loads also well enough?

The Kolob’s suspension is simple yet sophisticated. Two aluminum tubes provide a rigid vertical structure, which are tied into the pack via six-inch-tall sheet-plastic panels at the top and bottom. The structure is separated from your back by 3/4″ of closed cell foam. The tubes are straight, though some degree of curve is built into the shape of the pack…The Kolob carries really well – the rigidity of the structure controls bounce, an energy-losing effect of flat-bar-based suspensions. The lack of pre-curve in the ‘stays’ allows the pack to have a wide fit range – helped by the willingness of the foam to develop a ‘memory’ of your particular shape.

It’s a unique suspension arrangement in my experience.  The tubes terminate in plastic sleeves held together by a strap and buckle, and this arrangement is inserted into the pad sleeve along with a tri-fold of dense 1/4″ CCF (a very pragmatic bivy pad).  The combo sure is vertically rigid, but between the frame being so short (borderline unuseable for me) and the hipbelt lumbar area not having any real way to not be vertical load transfer to the hips is modest.  Suffice to say past experimentation has me acutely skeptical that the foams “memory” with use will do anything to alleviate these design issues.  Part of the issue is that when this version was produced it was a one-size fits most pack, and taller folks can sorta get along better with a too small pack than smaller folks can with one too large.  Imlay has since added packs built for smaller folks, but none for larger, which is somewhat of a surprise, as I’m not exactly a giant.

It has to be said that any more effective suspension I can easily imagine would also be more complex and likely less abrasion resistant.  It also has to be said that the reason to Kolob works is that the feature set is tuned to a single goal, with all the salient details (extra bartacks on handle, top photo) well attended to.  It’s a bit busy for my taste, and the frame height issue is a deal breaker, but it is one of the more interesting packs out there, and has been for some time.

One response to “How the Imlay Kolob works”