This is a logical extension of classic loop we traveled five years ago; down the Honaker trail, packraft the San Juan River to Grand Gulch, and hike that and some association of side canyons back to the mesa top.  Riding a bike from any of those trailheads down the highway and Moki dugway to the Honaker trailhead is an enjoyable and expeditious way to shuttle with only one car.  In my case, I left my bike at the Bullet Canyon trailhead, which made for a 26 mile bike shuttle.

You need two separate permits for this loop; one for the river, and one for Grand Gulch.  Between November 1 and February 28 the later are unlimited and self-serve at trailhead kiosks.  During the warmer parts of spring and fall there is a 20 quota per trailhead, per day.  These can be reserved, online, 90 days out.  Looking through March and April of this year, availability is widespread, save for Kane Gulch and Bullet Canyon on April weekends.  San Juan permits are unlimited outside the lottery season, April 15 through May 15.  I had ~670 cfs (at Bluff) for this recent trip, which for a packraft was more than adequate, if notably slow once morning headwinds kicked up.  Looking at historic averages, I think this part of the San Juan is floatable year round, though isolated evidence of shelf ice suggests it might start to freeze up during the coldest depths of winter.

The top of Cedar Mesa is above 6000 feet, making snow in the upper sections not uncommon and potentially problematic, especially on north facing aspects.  Pictured above is the “crux” of Bullet Canyon, after 2 inches of snow fell the night before.  I went through around 3pm, after the midday sun had melted things down, and before the snow refroze and ceased to be sticky.  A few hours earlier or later would have made the going trickier, as the people and dog (!) ahead of me seemed to have found (zoom in for the flail tracks).  It is certainly possible that sections like this would have enough snow to be impassable without a rope and/or specialized experience.   That said, the river straddles 4000 feet and overall daytime temperatures during November and February are usually quite pleasant.  I did bring a drysuit, which made floating during 3 hours of steady rain tolerable.

At low flows the San Juan is mellow and accessible for almost any level of skill and any boat.  I brought my small boat to save weight on the hiking, which was a good choice.  The character of the river does change notably below Slickhorn Canyon, transitioning from a muddy mountain stream, with a gravel and cobble bottom and sequential riffle where you’d expect, to a true desert river with a sticky sand bottom.  Much like with the Dirty Devil or Little Missouri, the San Juan could be 50 yards wide with only a small floatable channel right against either bank.  I’ve long since passed the point where negotiating such things have novelty. 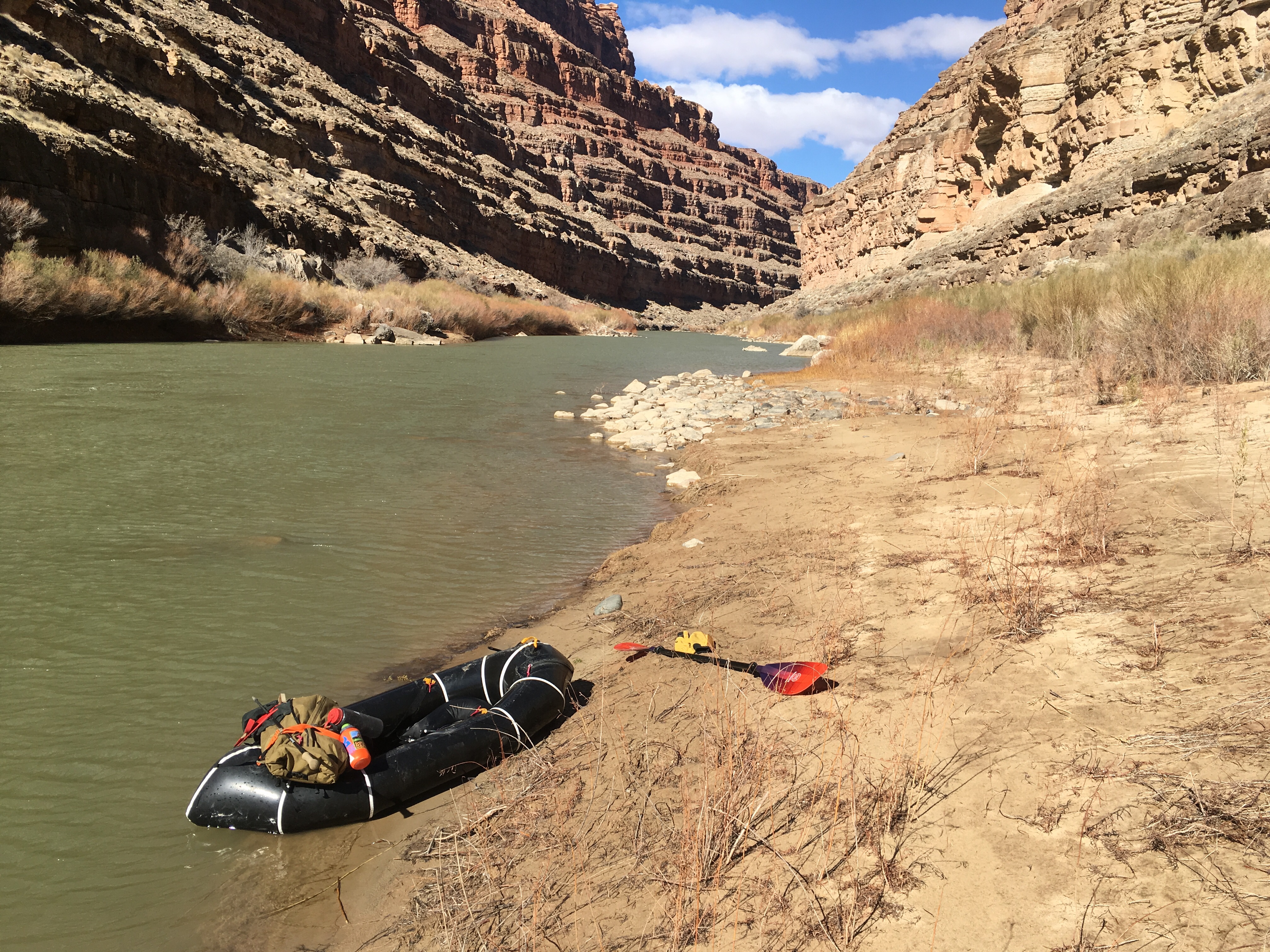 Grand Gulch itself is a unique canyon, and a somewhat odd companion to its neighbor, Slickhorn.  Slickhorn climbs steeply and moves through its phases fast; Grand Gulch is at least 4 times as long, climbs gradually (save at the very start and very end), and has a spectacular number of bends and abandoned meanders.  For varieties sake I couldn’t help climbing out the northern fork of Water Canyon and walking the plateau over to the Government Trail, which I took back into the canyon.  This was a highlight, both the rugged route finding and big views up top (one can see the Bear’s Ears, Monument Valley, Navajo mountain, and Mount Ellen all at once).  Grand Gulch from the Government Trail up to Bullet is remarkably uniform, with a 10 foot wide sand bottom windy between brushy banks with almost no breaks or obstacles.  There is a lot of cool canyon architecture and rock art to see in this stretch, but the scenery and walking impressed with their uniformity and general turgidity.  My legs were heavy after the Water Canyon excursion, and the day after, going past Dripping and Step Canyons, I had a struggle keeping in the moment and a generally positive mindset.

It is also worth highlighting that, due to limited visibility down amongst the trees and the lack of outstanding features, keeping track of your location/progress is more nuanced than usual in canyon country (that is, assuming I’m not the only backpacker left who avoids GPS).

I did find the scenery and walking up Bullet to be exceptional, a fitting highlight on which to end the trip.  The history here, to be addressed later, is absolutely something to return to, even if the additional floating and walking of Grand Gulch, relative to Slickhorn, does not make it the highest quality of additions.