We wanted something simple for Thanksgiving: a quiet place new to us, without snow and temps warm enough to not warrant full winter gear. We’re far enough north that getting out of our climate zone is a bit of a challenge, but Hells Canyon in Idaho/Oregon delivered.

Our route: south from Pittsburgh Landing (all-weather access), packraft crossing at Big Bar, up Temperance Creek, along the High Trail back to Pittsburgh Creek, and another crossing back to the truck.

The higher deserts of the Colorado Plateau are our first loves, so it’s always nice to see cactus making a northern incursion.

The Snake River is around 1300 feet at Pittsburgh, and autumn was still doing its work in the lower reaches of the side canyons.  I was impressed by the profusion of water, with most of the moderate-sized drainages having a healthy stream running, even midway up to the rim.

A ways in on the first day (Thanksgiving itself) we stopped at the Kirkwood ranch to see the museum and profusion of rusty farm implements.  It seemed like a nicer place than most to hide from the world. 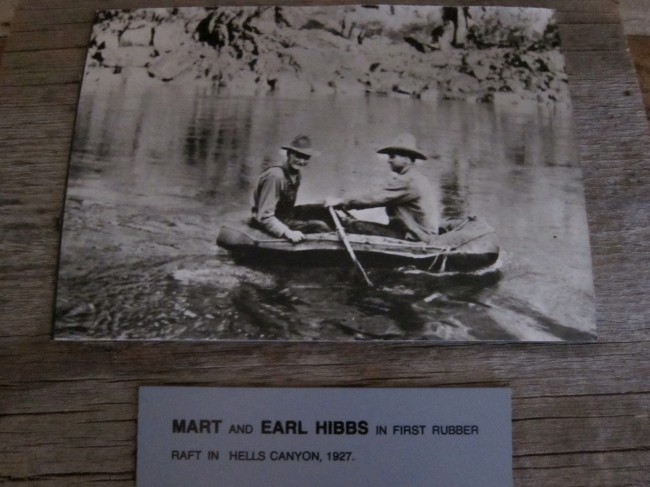 The Forest Service shuttles volunteers out to staff the ranch year-round.  The older couple from Seattle had been doing it for some time, but when we tried to explain our route they didn’t quite get it (no knowledge of the Oregon side, for instance).  In a pre-packraft world the river is for most hikers as definitive a barrier as any, the other side might as well be 500 miles away. 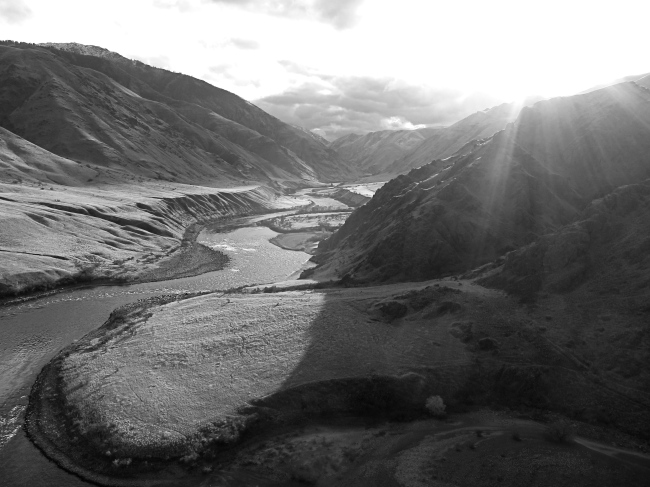 Looking upriver from Suicide Point.  We crossed near the Big Bar airstrip, which can be just seen on the flat grass plain lookers-left most of the way up the frame.

The plan was to inflate the boat, take the packs across, then come back to take M across.  We had a good spot with plenty of room downstream for error but I was quite tense anyway, leaving all your gear on the other side of the river and stacking two people in a small boat without life jackets goes against conventional wisdom.  The down-canyon afternoon winds didn’t help put my mind at ease, but in the end (and with a bit of fiddling) we used the beast with two backs position without incident.

Backpacking so near the solstice means either hiking in the dark or lots of time in camp, and on the first night we opted for the former as we headed up Temperance Creek.  The brush and creek crossings got a bit old, but a lack of flat ground and vast amounts of fire-killed cottonwood widowmakers got us just short of Wisnor Place and the junction with the High Trail before the Ponderosas took over and we found a moderately scrubby spot to pitch the tent.  The rain thankfully held off until after we made dinner and hung out around the fire for a while.

By coincidence, we camped just barely below snow line.  As with the day before, it looked like it was going to rain, but cleared as the sun gained height.

At one time Wisnor Place was a nice, solid, two-story cabin with a fantastic view, vintage ceiling-paper, and glass windows.  Now it’s only home to a robust packrat population. 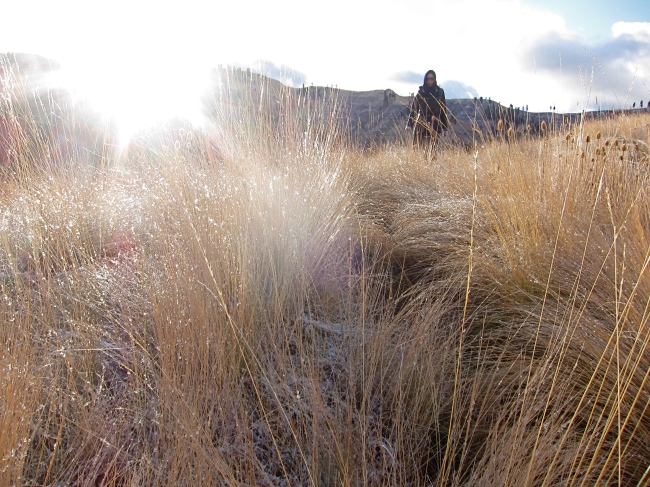 The day ended up having that high desert in late fall feel: vague clouds, crystal air, and drainingly icy wind.

The scenery did not suck.

Having decades to grow in isolation on choice sub-ridges produced some outstanding Ponderosa.  I’ve seen taller and thicker examples of the species, but not one to rival this one in breadth and sheer biomass.  The seemingly incidental location only added to the magic.

The theme for the whole trip, and that day especially, was that everything took longer and felt harder than seemed likely or reasonable.  Blame it on the faint trail, profligate elevation gain and loss, injudiciously heavy packs, residual fatigue from draining days at work, or (most likely) my being expectedly at the nadir of my annual weight/fitness curve, but the miles came slow.

It was a predictably easy choice to cut down Pittsburgh Creek and make a run for town and beer.  North of the above pictured junction with Cougar Creek the heretofore merely skinny trail became genuinely faint, and the combination of prominent elk trails, extraneous disused human trails, and myopia born of haste had use go right where we obviously wanted to go left and put us out the south slope above the creek, looking down on the actual trail and a big herd of elk. 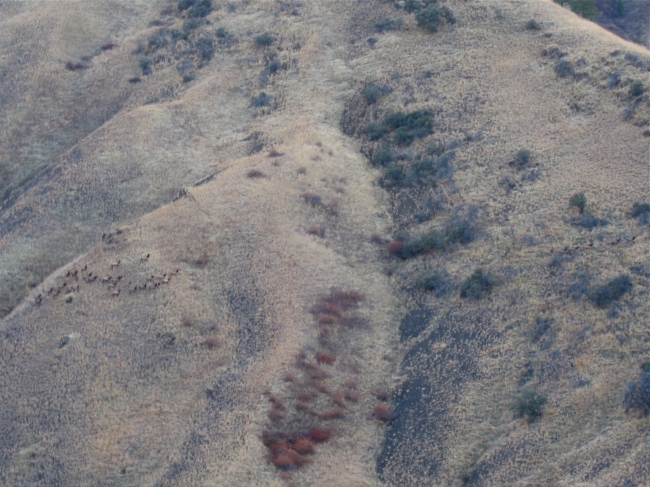 We made a now-clear eyed choice to double-down on our off-routedness, headed a few drainages, and went straight down a steep grass ridge.  I think M noticed sooner than I the trouble we were in: the main trail was on the other side and the bottom of the creek was choked with an awe-inspiring spread of blackberry bushes.  Following elk trails let us get off lucky with only a few scratches each and one big thorn deep in the tip of my right index finger.  It was a very Arizona experience to realize it was beyond the reach of metal implements and thus subject only to the au naturel puss-driven expulsion process.

The elk, as expected, had a great route through the cliffs which guarded the turn of the side canyon into the main, and soon we were on the main Oregon-side river trail hustling north towards the crossing.  I was doubly nervous now, with a less-placid crossing and fading light between us and a cheeseburger.  Everything went in good order, with headlamps on to see our footing on either side and to guard against a night-running jetboat.  We packed up and headed out the long dirt road with the extra fulfillment of managing the unexpected and unconventional so well.  Mexican food in Grangeville that night and a camp along the South Fork of the Clearwater set us up for a lazy return home over Lolo Pass, which was in the throes of full early season snow sports pandemonium.  I must be getting cynical, as I can’t get that excited about dodging stumps just yet.

Exxon wanted to take 350 of these, via truck, over the rather narrow and convoluted Highway 12 down to I-90 in Missoula.  It’s quite impossible to grasp the absurdity of this plan without both seeing the load and driving the highway.  Thankfully, it’s not going to happen, and one has to wonder at the economic forces which mad such a plan seem worth pursuing in the first place.