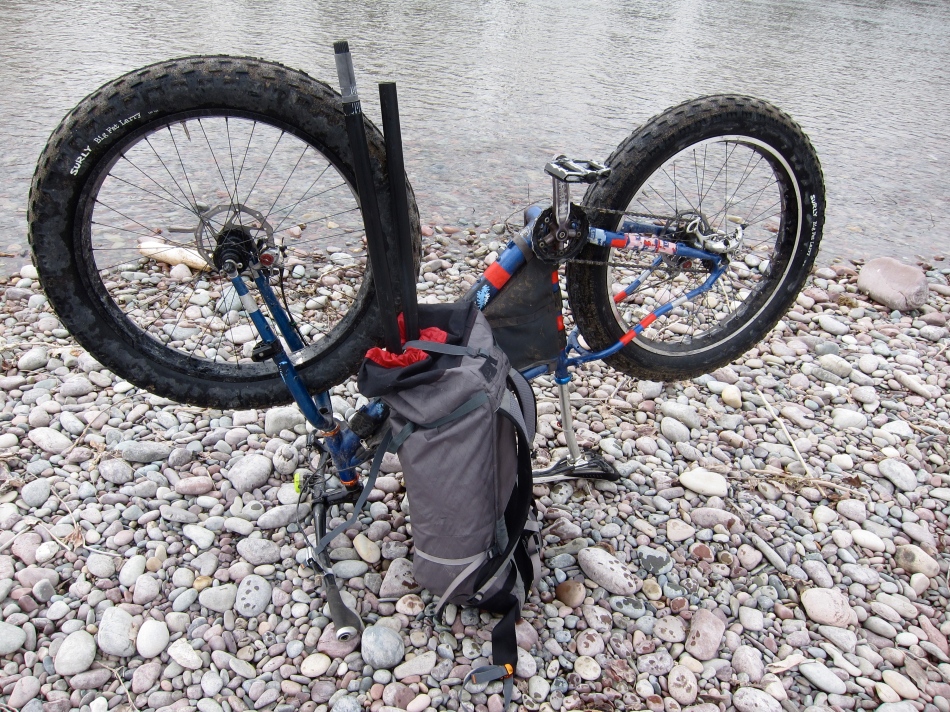 I made another bikerafting descent of the main Flathead today, using experience from last trip to dial in the crossings better.  I did fewer boat crossings (six versus nine), rode a lot more, and did the whole deal hours faster.  It’s a sweet route.

With slightly warmer weather and more confidence in my rigging abilities, I left the PFD at home, and just went with the gear you see above.  Stowing boat and paddle in the pack was a lot faster during transitions, and better for riding.  Larger (30+ liter) packs for cycling are not the easiest things to do well, they require a whole host of factors which would never occur to a designer who only has hiking in mind.

The first and most obvious factor is height, a pack used for cycling, especially with the riding wearing a bike helmet, can only be modestly tall before it begins interfering with your head in an annoying and potentially dangerous fashion.  This is most likely to happen at the worst moment: when rolling a very steep drop.  That being the case, it’s difficult for obvious reasons to create much capacity without making a pack too tall.  Going wider is one way, but I find wider packs to be all things equal less stable, and more prone to sideways lurching.  The widest packs can even interfere with arm movement while bushwacking and muscling the bike (to say nothing of off the bike activities like skiing and scrambling).  You can however, as this photo illustrates, make a pack quite a bit deeper than might be desirable for hiking.  The center of gravity of a cyclist sits a bit differently than a hiker.

I’ve been very pleased with the race pack, both generally and for cycling.  The 7″ width and 9″ depth allows lots of weight to be placed low, which is good for cycling, and also compresses well while staying tall (essential for maintaining enough structure to avoid torso length collapse).  I’d encourage you MYOG folks to try making a pack deeper than it is wide, or just buying a Cilogear 30:30 or something similar.

All of this is of course predicated on needing a big pack for biking.  Generally you’ll want to go a little easy on the weight, especially for longer stretches of less technical pedaling (i.e. roads), as pack weight does add stress to the butt/saddle interface (i.e. saddle sores become more likely).  That said, carrying a pack with decent weight while mountain biking shouldn’t be a big deal, and I’m intermittently but continuously astonished by all the folks who can’t stand any weight on their backs while riding.  In my highly biased opinion, if anything short of 20 pounds seems like a big deal in this context, your shoulders and especially core could use some attention.  But I’ve been a backpacker at least as long as I’ve been a cyclist.

Coming at last to the subject at hand, I wasn’t content with the length of the original drawcord closure on the race pack, and cut it off to add a roll top instead.  I didn’t like the roll top at all, and a few days ago cut that off and added a drawcord job back on, just a bit longer than the original.  A roll top may be more weatherproof, and if designed right can add some nice compression, but as it played out on the race pack and on the Mountain Hardwear Thruway the buckles and rolling was just too fiddly.  I was also able to confirm that given similar materials for the collar, and similar volumes when maxed out, a roll top is heavier than a drawcord, mainly due to the buckles (this is splitting grams, the difference is modest).

A past commenter did wonder about the weatherproofing on a drawcord closure without a lid.  The answer is twofold; that I usually have a foam pad lashed over the opening, and that I try to avoid stuffing the pack totally full, so I can roll it a bit before cinching the top strap down.  The top strap is key for this, and something I almost always need anyway.  Not a perfect system, but my favorite at the moment.

I also revised the hipbelt setup on the race pack.  On our Many Glacier trip a while back I slipped on some ice coming down on to the lake, and landed square on the back of the pack.  This ripped out both side attachments, which I had forgotten to bartack.  Oops.   It did give me the opportunity to simplify the design, as the 7″ width of the back panel made a complex hipbelt unnecessary when trying to achieve a full wrap.  The above arrangement works great.  I also bought some of these, specifically to replace the plastic 3/4″ buckle on the waist belt.  The alu hook is secure, effective, and bomber, while the narrow belt eliminates the belly pinching I get from using anything bigger than a 1″ waist buckle while cycling.

In summary, packs are awesome, and having a pack that suits you perfectly because you made it is even more awesome.

5 responses to “Rolltops, drawcords, and larger packs for cycling”