Joe Cosley was one of Glacier Parks original rangers.  He had been a trapper in the area prior to the founding in 1910, and thus a natural choice.  Cosley must have remained a rough character; while on his first trip around the park in the winter of 1913 Norton Pearl noted that Cosley’s cabin was so dirty that Pearl would have built a better home for his dog.  Like at least several of the original rangers he continued to trap and supplement his income, quite illegal, and was eventually fired.  Cosley continued to poach, mainly in his now well-established stomping ground of the Belly River.  The middle section of the Belly, below the confluence of the upper Belly and Mokowanis Rivers (and the ranger station), is flat and slow, perfect habitat for beavers.

In May of 1929, Joe Heimes caught and arrested Cosley in the Belly, a story which to this day remains prominent in park and regional legend.  What follows are Heimes’ logbook entries from those days in May. 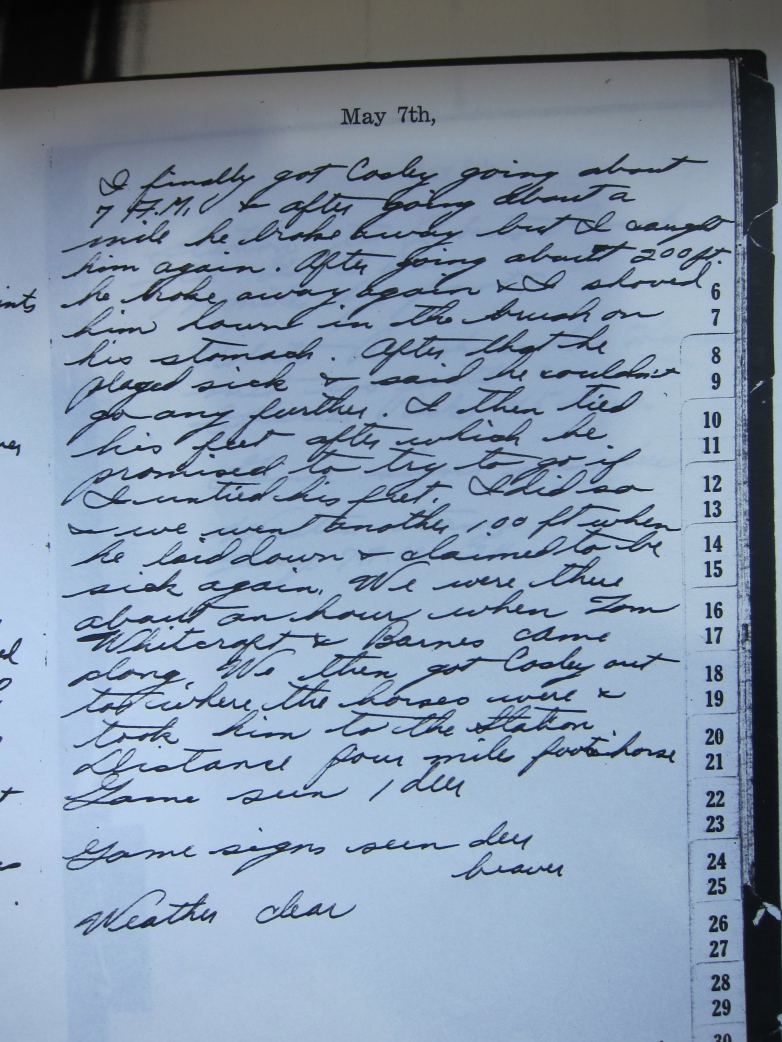 Heimes’ entries mostly jive with the legend as I’d heard it before.  He caught Cosley, took him to what is now West Glacier (Belton then), Cosely was tried, fined, and let go and/or bailed out by a friend.  The subtext is that this state of affairs was not entirely to the park services liking.  What ensued was a race for further evidence; with Heimes taking the train to East Glacier (Glacier Park in the above entries), a car to the park border at what is now northern Babb, and a horse in to the Belly over Gable Pass.  Cosley, according to legend, was loaned a pair of snowshoes and given a ride to the end of the road in the McDonald Valley, hiking and snowshoeing over the Continental Divide.  Whoever made it first would gain possession of Cosley’s gear and stash of furs.  If Cosley could grab them and escape to Canada he would avoid further trouble and sell the pelts for a decent sum.  If Heimes made it first he would have evidence to further prosecute Cosley.

Cosley’s trial was set for 1000 on May 10th.  Assume the trial lasted 2 hours, and it took a further 4-6 hours for someone to post his bond, lend him snowshoes, buy him a drink and a meal, and drive him to Lake McDonald lodge.  Assume that Heimes couldn’t catch a train to East Glacier until the morning of the 11th, and perhaps made it to Cosley’s camp by 0700 on the morning of the 12th (an impressive feat).  Cosley had a solid 36 hours to go what according to my calculations was about 30 miles.

Against a veteran traveler like Cosley Heimes didn’t have a chance.

The road may have gone further up McDonald at that time.  Even if it did not, even after a late winter the horse trail would have been clear of snow, albeit muddy, well past Packer’s Roost.  Easy terrain, over which a properly motivated Cosley could make close to 4 mph.  He would have been nearing Packers by dark.  In those days a horse trail went up Mineral Creek, making it an obvious choice.  Mineral is flood is pretty frightening, it’s a steep creek with a cobbled bottom, one of the few in the park I consider essentially uncrossable at high water.  It might have still been frozen up a bit at that time of year, and even if Cosley had to make a few detours to avoid some of the trail crossings this would have been decently fast travel.  He would have made it to near Ahern Creek by the wee hours of the 11th.

The crossing of Ahern Pass is the crux of Cosley’s journey.  The ascent from the west is steep just off Mineral Creek, but not enough to be a big deal.  The east side drop to Helen Lake is very steep, enough that with fresh snow avalanches are a concern, and with consolidated snow an ice axe is obligatory.  It is hard to say what conditions Cosley would have had.  In either case I imagine he reached Ahern Pass near dawn on the 11th, or perhaps he hunkered down lower, building a fire in the last spruce groves and taking a nap after the excitement of the previous days.  If there was fresh snow he’d want to cross early, before it warmed too much, but if there wasn’t he’d want to wait until things had softened up at least a bit.  In either case the game trails between Helen and Elizabeth Lakes (both reportedly named for Cosley’s paramours) would be largely snow free, and the trail below Elizabeth down to the ranger station easy going.  I doubt he worried too much about leaving footprints.  He likely reached his camp in the evening of the 11th, possibly much sooner, and was in Canada when the 12th was only a few hours old.

Cosley was 58 at the time of his flight across Glacier.  He stayed in Canada for the rest of his life, trapping into his 70s, and dying (reportedly of scurvy) in his winter cabin in the wilderness.