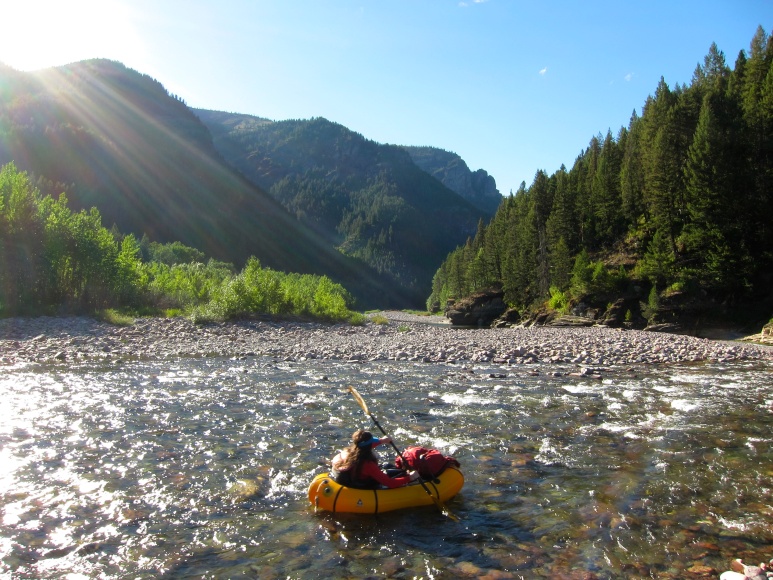 Casey and Erin came up this weekend to packraft the Middle Fork. Classic wilderness float, non-pushy flows, bluebird summer weather; what could go wrong? Nothing, but things would have been simpler had I remembered my Aristotle and made a distinction: Packrafting is not boating. It is similar to kayaking, rafting, and canoeing in that it takes place on water. That’s about it.

There is a lot of beer in Casey’s huge pack.  I didn’t think much of it, a person has a right to pack as much beer as they like, after all.  I don’t think he thought much of it when I commented that once on the water he wouldn’t have many hands-free moments to drink said beer.

Near as I can tell, the conventional and preferred rhythm of boating is characterized by moments of focus/adrenalin/terror in a soup of sloth and contemplation.  Hence the beer.  Yes, I realize there are many exceptions.  My favorite sort of packrafting involves a twisting rivers, endless boulder gardens and riffles, and just enough water to squeak through.  Yes, I realize some/many/most other packrafters may have other interpretations.  The point here is that countervailing assumptions lay dormant for the whole hike in.  We got down to river level on that gorgeous park near Lodgepole Creek, and Casey remarked, emphatically and several times, that the river looked damn low.  My reaction: a shrug and mumbled wellyeahofcourse.

The lost-in-translation factor is exacerbated by the still lonely lot of being a packrafter in Montana.  Or at least, in not-Bozseoulla Montana.  A packraft rental shop opened in town this summer, I keep getting more emails asking if the White is floatable in August (it generally isn’t), and now it seems that everyone knows someone with an Alpacka.  I still haven’t seen the packrafting hordes out in the wild.  Maybe it’s my generally introverted and misanthropic tendencies, manifested as planning trips when and where no one else wants to go.  Nonetheless, I got a kick out of seeing four (4!) packrafts inflated and ready on the bank. 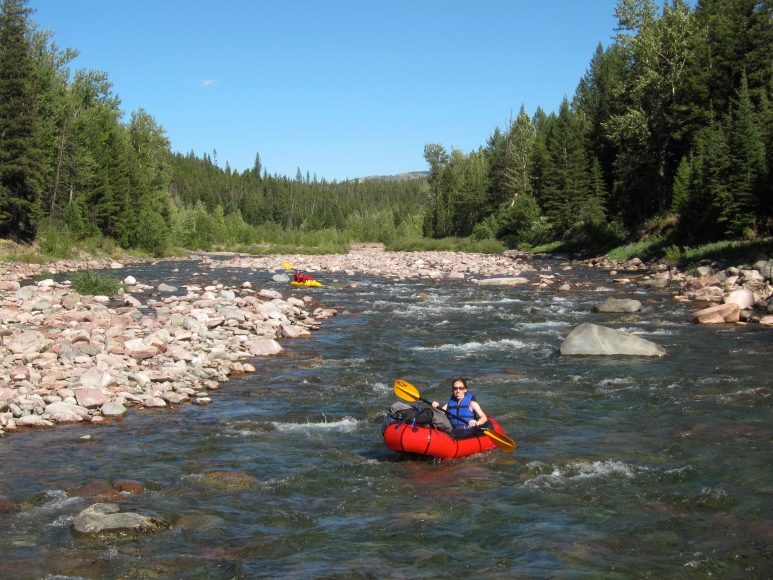 What followed is probably not everyone’s idea of a good time.  We got stuck on many rocks, many times.  It was slow.  The water was cold, and when the sun went the air followed.  By the time we pulled out, at the very place I did last spring, I was soaked and became wracked with shivers as I sought out sticks and got a fire going.  It felt comfortably familiar, and I was grinning the whole time.

The next morning it was quickly obvious that the not-boating was taking its toll, mentally and physically.  To add insult, Erin’s boat started leaking.  I could not find the source, though the near-constant 15 mph upstream gusts didn’t help.  Casey and Erin headed upriver on the trail, back to their car, while M and I kept floating, down to ours.

Afterwards everyone purported to have enjoyed the trip, though M’s sense of good scenery has been made far too narrow by big mountains.  I loved every second, and am gratified that I found time to see both the South and Middle Forks again this summer (and both in the Scout). 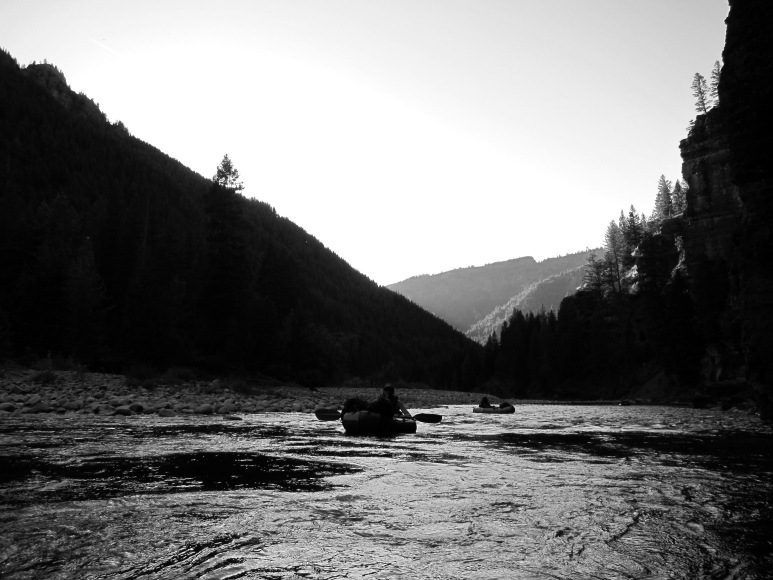 All of which, in my mind, leads to another distinction.  Skurka almost got it right with his conceptually sound by verbally problematic “ultimate hiker” idea.  For me the act of being in the wilderness, and the economy of and focus on all the constituent processes is inextricable from the scenery and all the associated sensory feedback.  Trimming all the fat from everything helps me be more connected to where I am and what I’m doing.  I’d make a distinction between those for whom this is the case, and those for whom process and accoutrement are means to an end.  And no, volume of experience is not a more simple way to separate one from the other.  As I said when I first did this trip two years ago:  “…in point of epistemological footing, the physical objects and the gods differ only in degree and not in kind.”  There’s so much to know out there, I feel obligated to use everything at my disposal to get it all deep into every pore.

13 responses to “Packrafting, not boating”