Multiday outdoor trips succeed via planning: picking a route that suits the conditions, bringing appropriate gear, having sufficiently assessed said gear prior, and being prepared (materially and mentally) for contingencies. It makes me sad to see so many trips crash and burn, or underperform spectacularly, because of rudimentary things left unthought.

All last week I knew what I was going to do this past weekend. Every indicator pointed that conditions would be ideal. With two exceptions, gear for such a thing had long since been dialed in. The only question, which I kept turning over and over in my head Thursday and Friday, was whether to bring a drysuit.

I’ve had this route in mind since last autumn, and like many such projects when conditions align the opportunity must be seized.  In this case, I wanted to ski in the Skyland Road and down Morrison Creek to the Middle Fork of the Flathead, and packraft from Lodgepole Creek to Bear Creek (the highway), skiing around Spruce Park to avoid the tough whitewater therein.  Good conditions for this involve enough snow frozen hard enough to make skiing decent, enough water to float but not enough to be pushy (1200-2500 cfs at West Glacier), and an extensive enough history of warm temps to rule out the possibility of snow bridges or ice jams in the many narrow sections of the river.

Last weekend temps spiked and the river climbed to 3500 cfs, but things have cooled since, with flows dropping to the low 2000s and the snow consolidating.  Sunday was even supposed to be sunny and warm.  There was no reason not to go.

The first ~10 miles was on dirt roads groomed smooth by snowmachine traffic.  I was surprised to find 2-6″ of overnight snow on the ground, and though it was sticky as things warmed made decent time.  Hauling a crammed pack of rafting and camping gear felt like might be trying something foolish.

The fresh snow slowed things down a bit, good in places, bad in others. I lost the trail several times and biffed it several more.  There are occasions when snow cover makes human-powered overland travel faster, but for at least that doesn’t seem to happen in the thick pine woods which so predominate this corner of the world.  Trail breaking, trial finding, and the flail factor associated with deadfall and weird quirks of the trail conspired to tire me out by the time I finally reached the river.

Yardsale!  Justin will remember this as the end, at last, of the slow scrapping that was Three Forks.

Skis rigged.  First time I’d tried this.  The back attachments are just like the unused black one forward (which exists, along with its twin to starboard, for bike lashing).  Originally I had thought I’d use the front and back lash tabs to independently secure the skis, but failed to take into account the camber of nordic skis.  They flopped too much, so the above adjustment was made.  Aside from hitting my paddle on the heel plate occasionally this rig was unobtrusive and very stable.

The other piece of brand new gear for the weekend were my Rossignol BCX11 boots.  They did very well.  I’ll say more later.

After skiing for 7+ hours, I put in late in the afternoon, but still in the height of luxurious sun.  The drysuit felt, as always, like monstrous battle armor, but given my nervousness about river conditions and the remoteness of my situation the margin of error it gave was confidence inspiring.  The river level ended up being perfect, and I breezed through to Granite Creek and the funny little cabin on the cliff overlooking the water in a few hours.  By then the sun was out of sight, and it was a lot colder.  I was tempted to camp at the cabin, but pushed on a bit, finding a bar with enough southern orientation to melt out a few patches.  Just a few minutes away from serious shivering, I made a warming fire immediately.

Not many people can think up an excuse to wear ski boots and a drysuit at the same time. 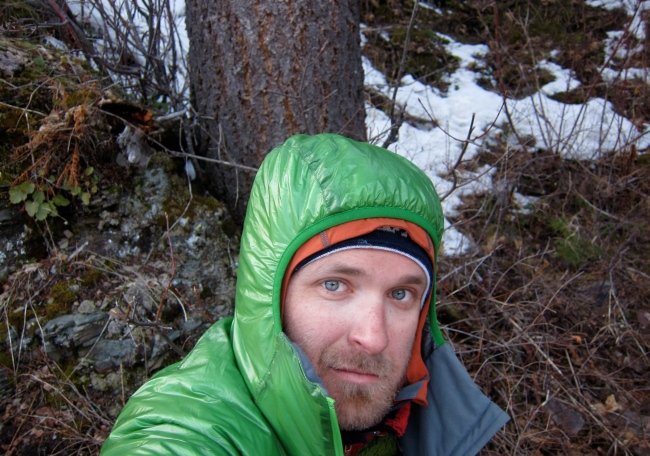 Relieved to be warm again.  I can smell the smoke again just looking at this.

There were numerous complications yet to deal with, chiefly that it had been impossible to negotiate getting in the out of the boat without getting a bit of water in each boot, and thus in my socks.  Warming my feet up enough to make boating safe Sunday morning was a nuisance.  I also got to do a field repair in the boat, as mid-morning (and right past our second camp from the trip last year) my main elbow valve began leaking around its edge.  This is a design flaw with Alpackas as they stand; the fairly rigid plastic of the valve makes it too easy to put leverage on the cemented connection with the fabric, which leads to leaks.  Fortunately I had some of this, and two thin coats around the joint got the job done and me back on the water airtight.

I had resolved to be very conservative on the river, and I was, portaging several things we ran last September.  Nonetheless, I had enough time to take a leisurely break at the takeout near the Spruce Park cabin, to dry things and warm myself before skiing around to the Dirtyface Creek crossing and putting in for the final few miles of floating.  At Bear Creek I piled my gear in the boat, hauled it up the bank, and dragged it across the snowed-in parking lot over to the road, then pulled out my foam mat and laid down in the sun to await M.  Convenient for my ego, the red raft with skis sticking out captured the attention of an NPS law enforcement ranger, who pulled over to talk packrafting and compliment me “for getting after it.”