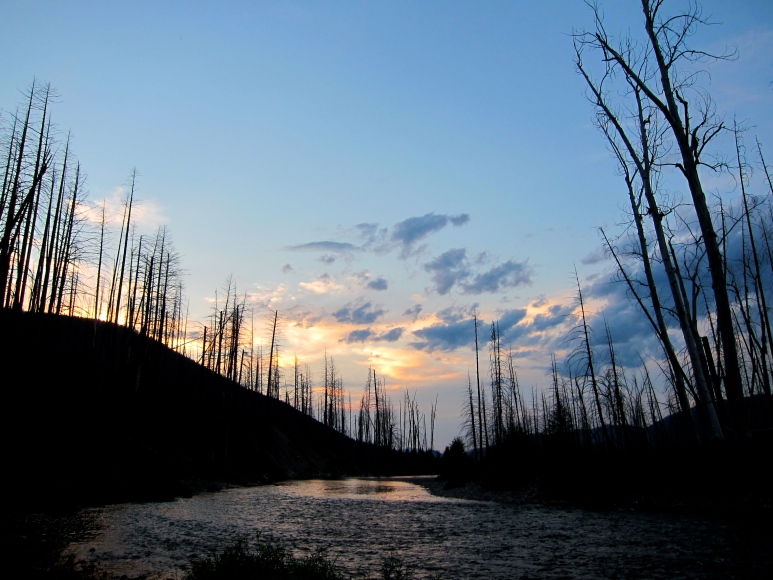 Going through the lower reaches of the South Fork, down to and past Spotted Bear, I saw no one for hours. A civilized stretch of river relative to the past days, but still two hours of dirt road from anything. A raft came into view, a guy with a big hat at the hours, and a blond woman and a guy with a clumsy cast in the seats. Two riffles later I catch them, discover they had been down from Cedar Flats, 15 miles upstream, overnight. I ask the guy at the oars if the flipflops I’m wearing, found in perfect parallel on a gravel bar 4 hours ago, were his. He said yes. I ask him if he wants them back. Also yes. A minute later I knew they were flying home to Portland, tomorrow, from the grass strip a few miles downstream. The guys who had delivered their raft were picking them at the bridge, were from Whitefish, and would give me a ride home. Where was the bridge? Well, right there. Go left or you’ll run out of water. 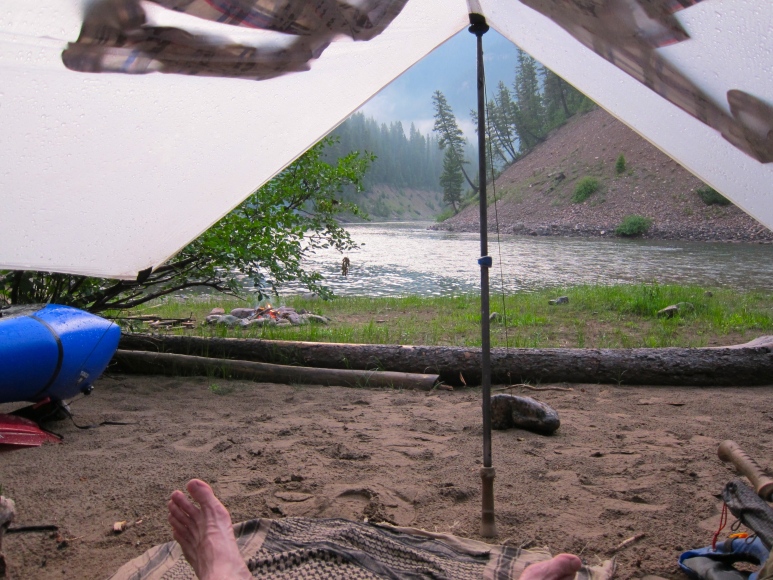 The night before the last day.  Fog and sore limbs.  I camped so close to my fire reluctantly, having thrown the tarp up in a hailstorm which never really let up until I was too tired to move it. 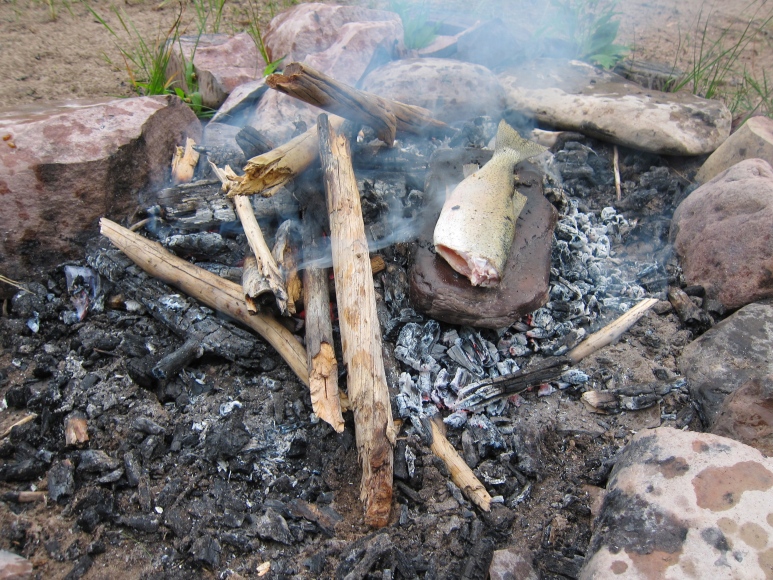 I didn’t want to camp there because of the fish bones and skin I burnt up.  My newest and most favorite trout cooking technique: heat up a flat dry rock, oil it, and fry the trout.  Season properly, and eat. 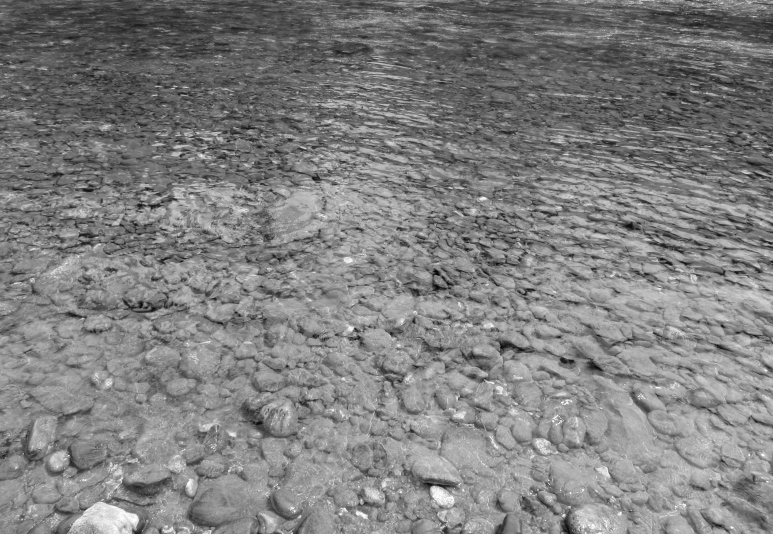 The South Fork of the Flathead is sacred water.  It is not an exaggeration to say that my first trip 4 years ago changed my life. 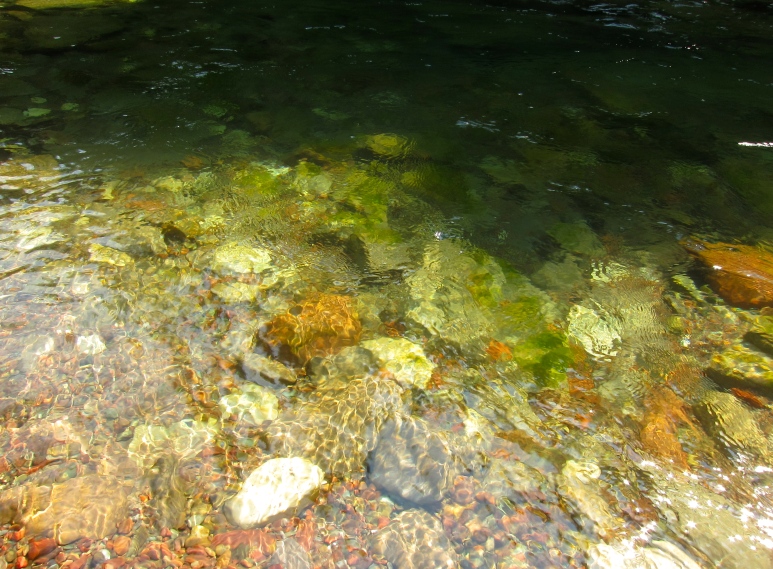 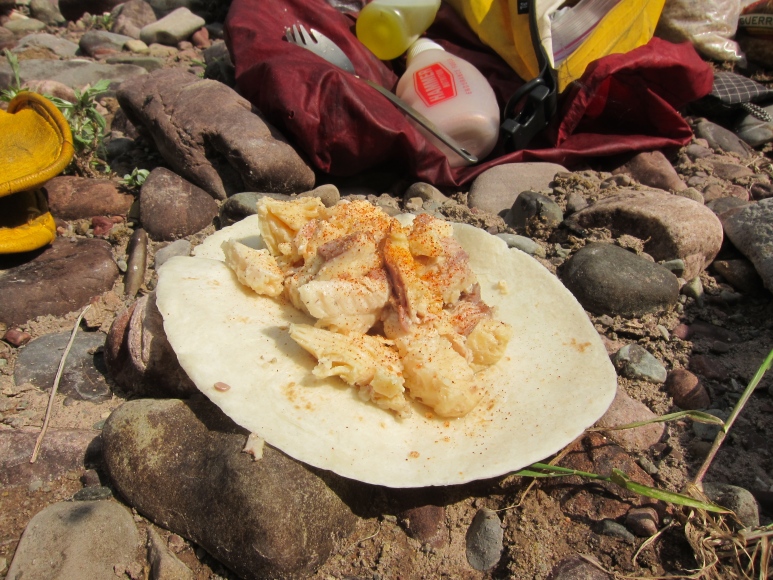 The moral aspects of catch and release fishing grow ever more problematic in my mind.  The basics are inarguable; you’re causing fish distress for recreation, and in many ways the number of critters to whom you can cause distress, and how vigorously they express their terror, form the rubric for satisfaction.  For the moment, my solution (I still enjoy catching fish) is to fish less, and eat more.  An imperfect answer.

The major technical innovation in the fish-eating department is the Hammer gel flask pictured above.  Filling it with a spice mixture (2 parts salt, 2 parts garlic powder, 1 part paprika) results in a watertight container and a very easy method of dispensing the spice. 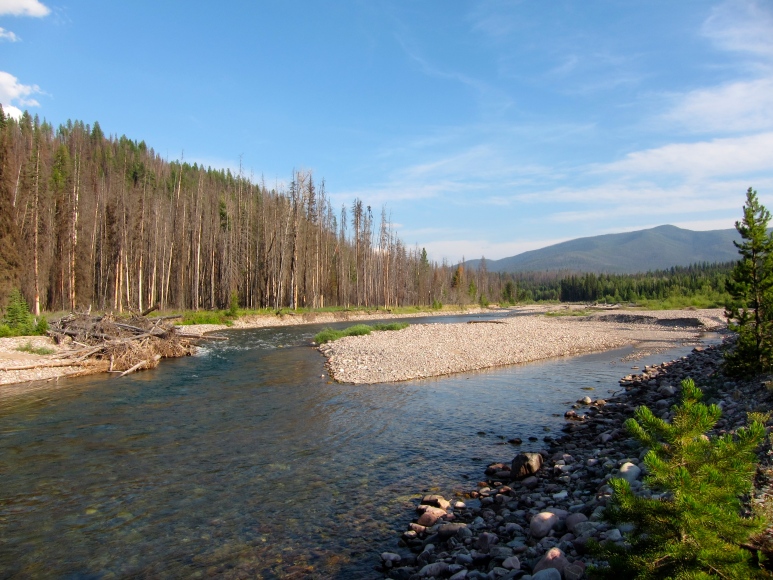 The South Fork has a lot of good campsites.  Last month, Spencer, Luke and M got to witness my boorish hagiographic habits as I narrated significant bends and gravel bars (“this is where I camped in 2010; this is where I stopped to build a fire in 2011”).  A big part of the appeal floating here is moving along in a fashion recalling days 2 centuries past, and stopping wherever fancy strikes.  Given that I move at least a few people to go see the South Fork for themselves, I feel obliged to point out that it is good manners to both camp out of sight of the river (if only just), and to build fires and concentrate impact down below the high water mark.  Lining up big tents in meadows as close to the river as possible is tempting, but tacky. 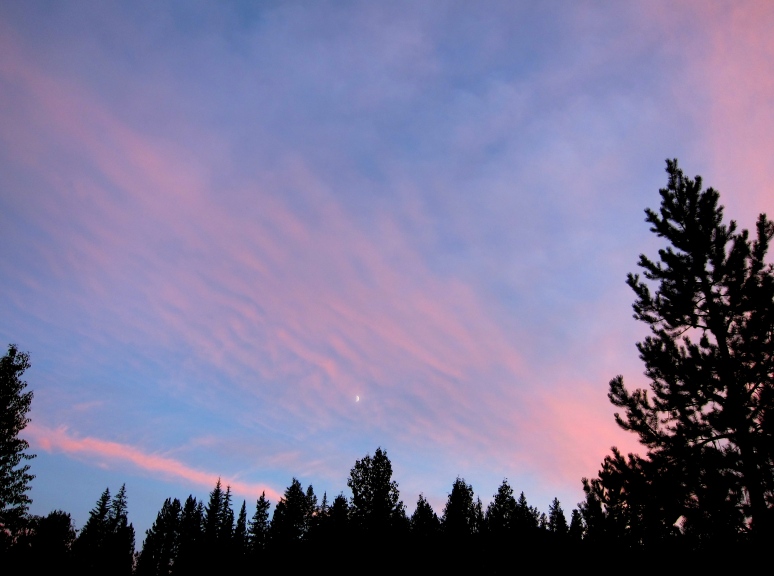 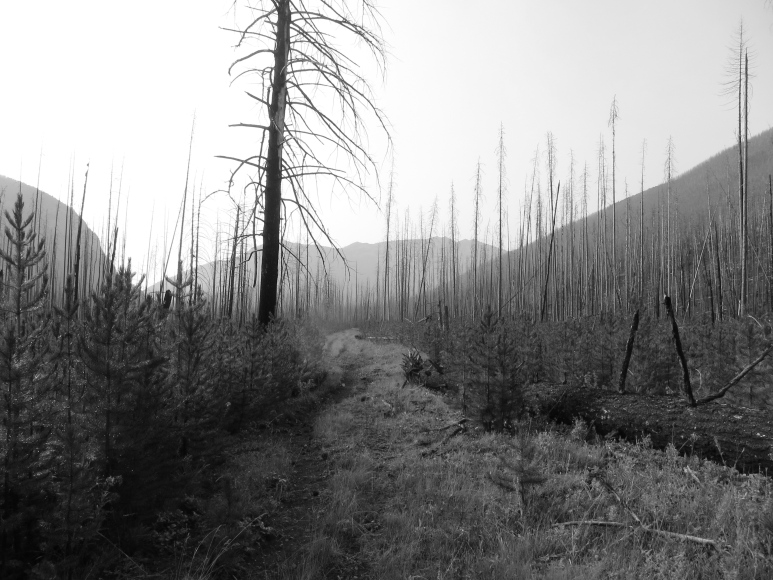 One of my missions this time was to, at last, get back to the lower gorge on Youngs Creek and find out if it was in fact as awesome as I recall it being, from that first trip an experiential eternity ago. 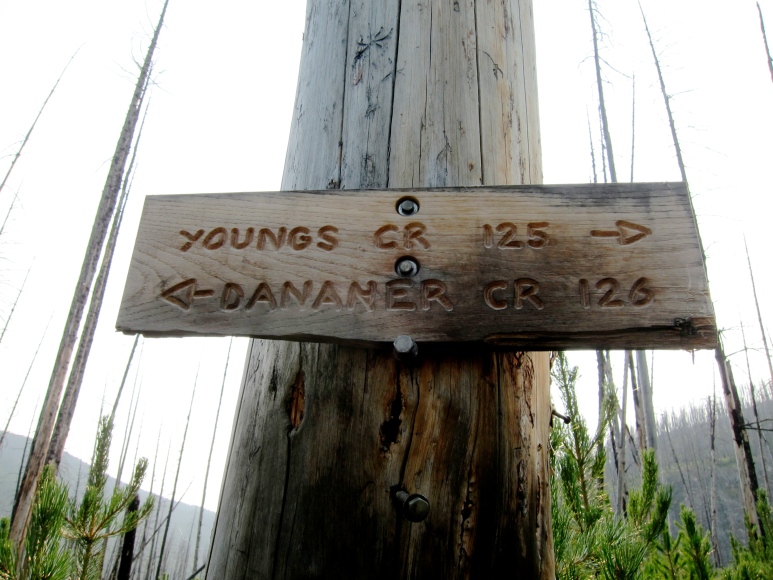 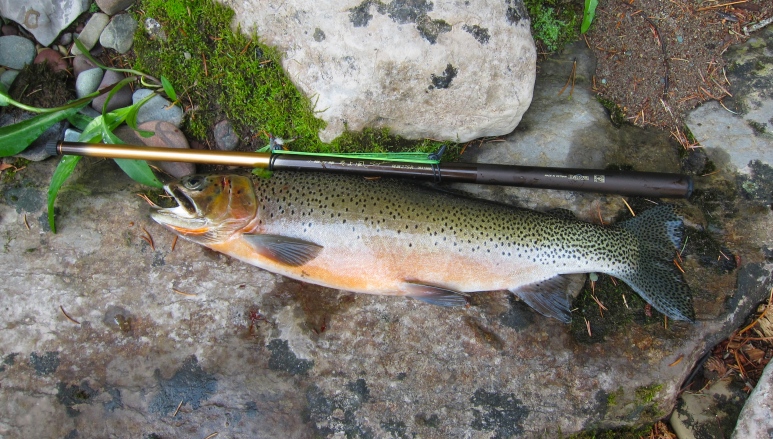 It is better than I recalled.  Absolutely phenomenal, in fact, and easily one of the top five floats in the Bob.  Which is saying a great deal.

A trip highlight was hooking, and with a lot of running, landing, the above ~16 incher.  On my 9 foot Soyokaze, that is a monster of a fish, and the biggest I’ve managed to date.  It was hooked rather deeply, so went on the block as lunch. 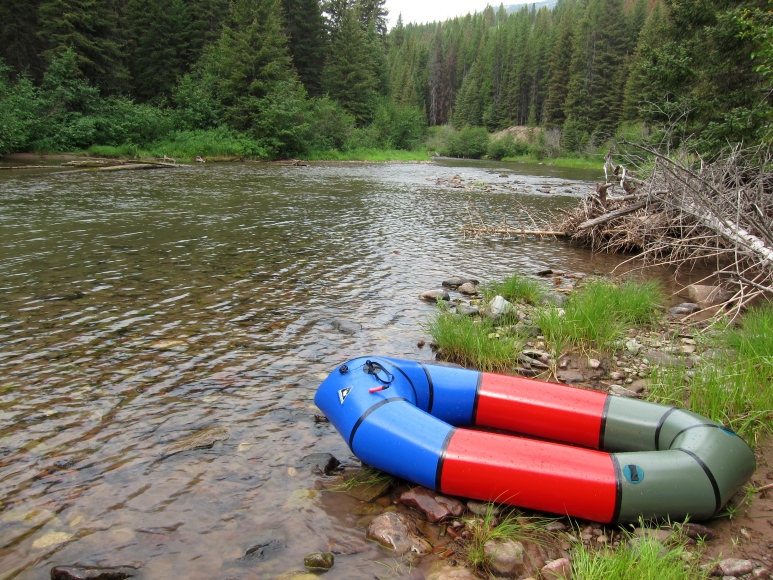 That mostly submerged patch of gravel was bigger in 2010, where I put in, and where the packrafting began.  Youngs in the Scout was a good way to get very wet. 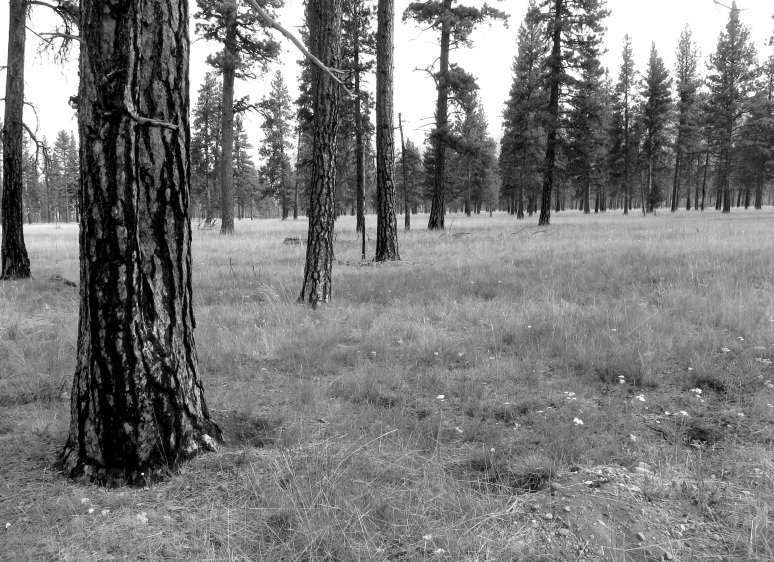 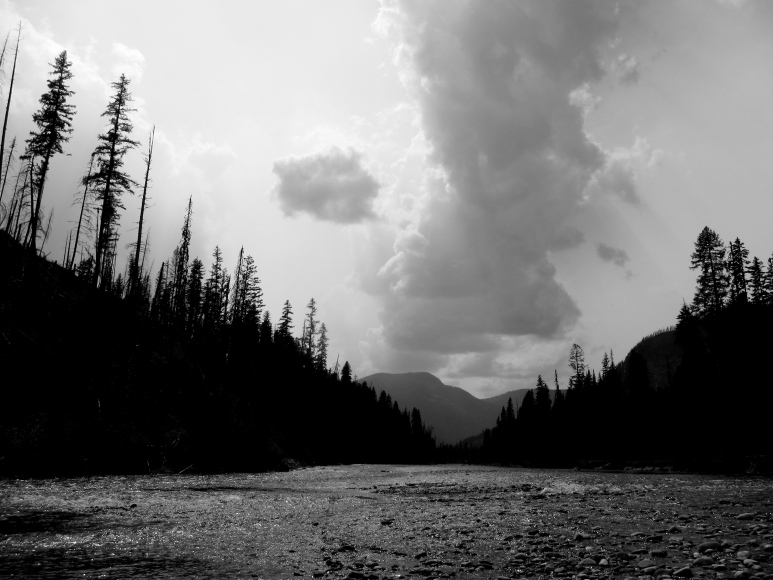 In all the trips before I had accumulated a list of pools to fish, little beaches for camping, side hikes to revisit.  I stopped for every one. 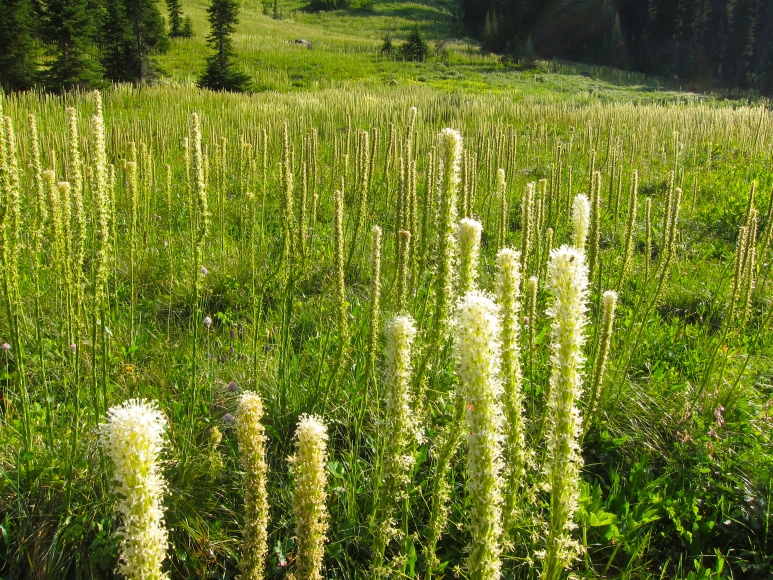 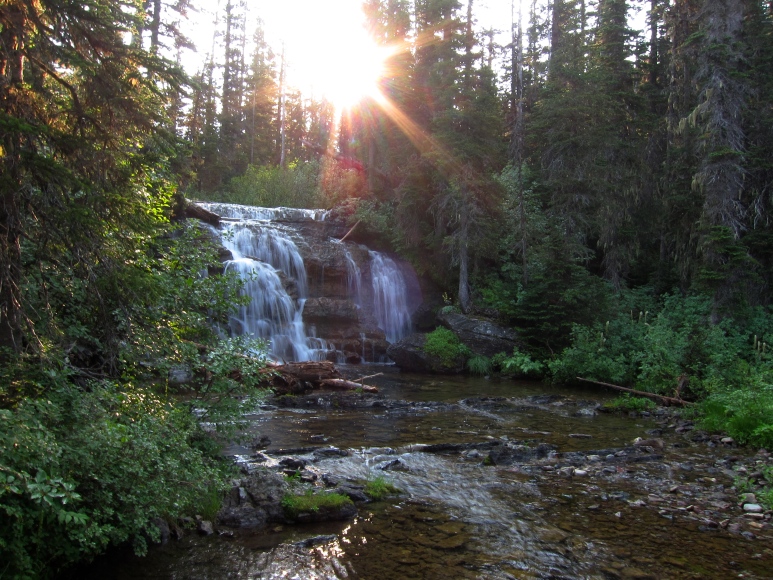 Even the choice of entrance was not just a matter of practicality.  Holland Lake was where I first entered the Bob, on a hike right after we moved to Missoula in 2008, and where I ended this trip, which convinced me (among other things) that the Wilderness Classic was possible. 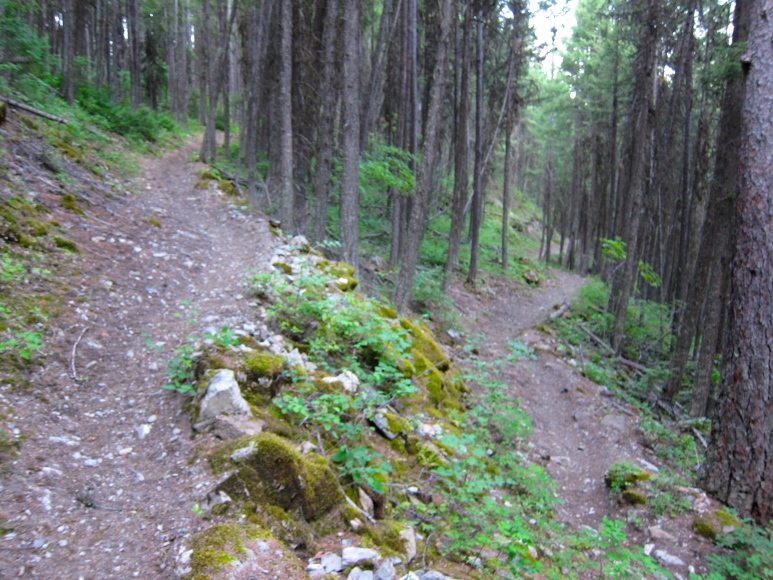 So why all the nostalgia, and the early return?

It all began the second night, when after repeated digging, I realized I had left my food hanging rope at the previous camp.  I improvised a barely acceptable substitute out of two stuff sack cinches, a tarp guyline, and both packraft straps, but was left more befuddled than irate.  I never, ever, ever do that.  Two nights later I did the same thing: leaving that bit of three cords tied together sitting somewhere at the previous camp.

It really all began weeks ago, when as I eluded previously I was struck with an embarrassing amount of indecision about where to go, and what to do.  Sitting in camp mid-trip, meditating around the fire as the sun went down (and after I hung my food with the improvised rope), I realized that this was my last big summer traverse before I became a different person (as indicated by previously planned changes).  All a bit absurd, for a number of reasons.  First, that it took me so much bother to see things for what they are, for myself.  Second, because there are always more trips to do and places to see than human finitude will allow.  And third, because I’m already a different person.  My life has been marked by phases, moving from one outdoor interest to another.  I’m already moving a bit beyond the most intense obsession with backpacking and packrafting, though they’ve been the most enjoyable, satisfying, and will I assume prove the most enduring of all my pursuits.

How I see things, and who I am (silly though the idea is), has been irrevocably and  considerably changed by packrafting in the Bob. 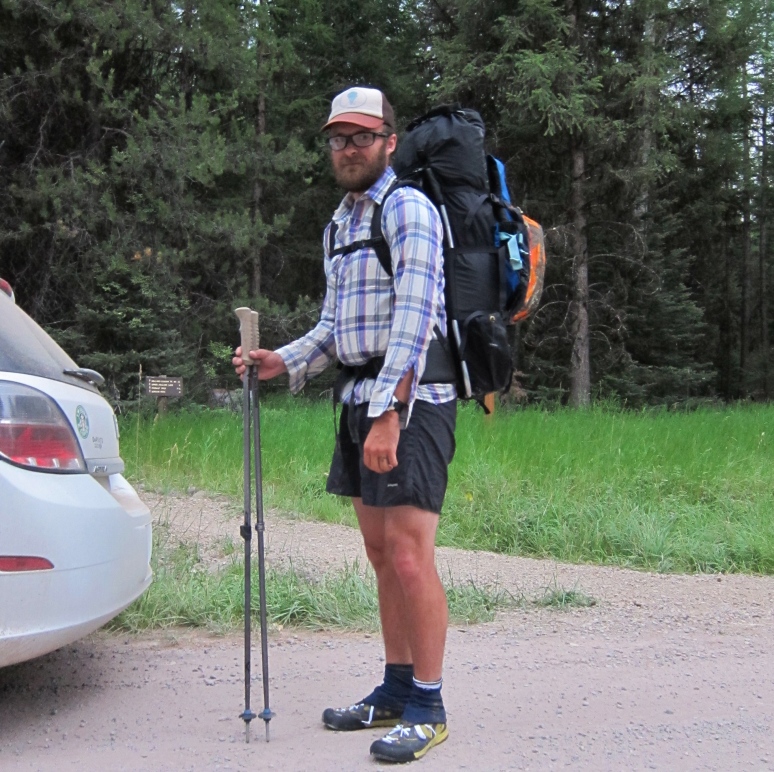 Being pleased with this realization, content with life generally, and in the face of evidence that my full attention was elsewhere, I completed floating out the South Fork, and as mentioned at the beginning, had a very easy time finding a ride home early.  Sitting in the back of that truck through the long drive along the reservoir, I studied the late afternoon light through the trees and smiled.  Such satisfaction and contentment is rare, and it felt like I had gotten away with something truly grand.

6 responses to “The farewell tour”