I love the Cairn maps of the Bob, they’re a massive improvement over the old Forest Service map, very readable, and have in my experience proven to be accurate. A summer wandering around with a fancy GPS on your pack will in the end get good results. Thankfully, maps can’t show everything, and the Cairn maps leave plenty of mystery to be discovered in the Bob. 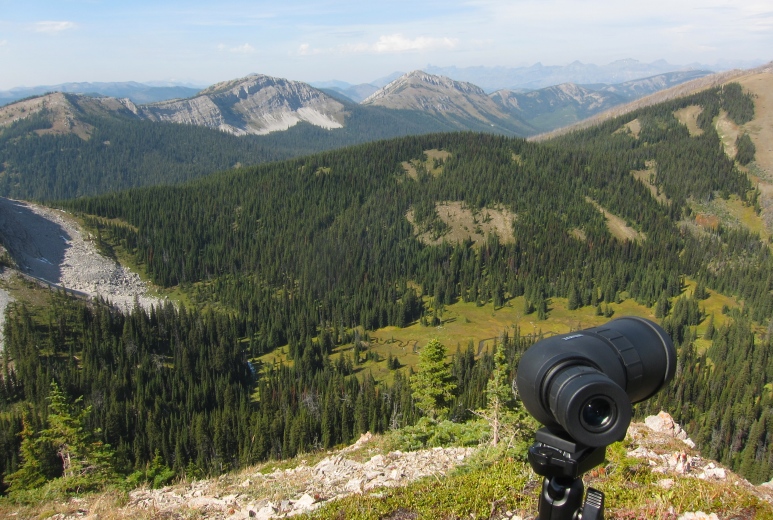 It doesn’t take long to see that deep in the Bob, trails function like roads when it comes to moving charismatic megavertebrate traffic away. Thus, if you’re hunting something other than Spruce Grouse, you’re well served by getting off the trails. Alaska has ruined me, in that it showed me what big landscapes look like without ever had any human-built paths, and when out there I always spend lots of time thinking about what parts of Montana would look like without human interference and assistance. I say the later because, naturally, critters like our trails as much as we do; they doubtless changed travel patterns considerably. They just tend to use them in the dark.

Despite the impressive number of trails throughout the Bob, and the small number of drainages left unmarked, there are plenty of pockets where large four-legged mammals have been left to blaze their own path. There are also a surprising number of forest services trails which have been abandoned to the forest, and an unsurprising number of unofficial and I would imagine illegally cut outfitter trails, usually leading from a hunting camp along a creek to that nice, untrailed saddle with good glassing locations. 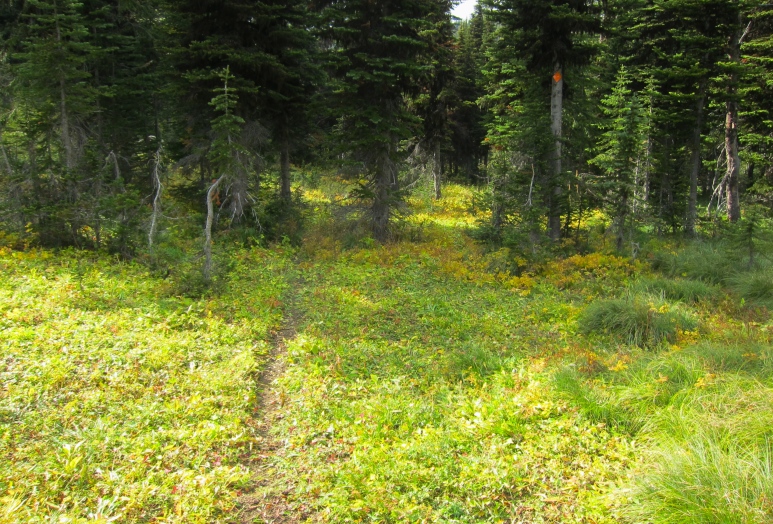 Sometimes a trail is a combination of the above, and requires a delightful amount of sleuthing to be able to guess about it’s history. A few days ago I got up in the dark, drove in a trailhead, road my bike for 45 minutes up a closed old road, stashed it in the trees, and started walking. I immediately found myself on a good trail going up the creek towards my destination. Many logs had been chainsawed out, albeit long ago, and while in a few spots the tread looked like it had been cut out, for the most part it appeared to be maintained by human (~30%) and elk/deer/bear (70%) traffic. A perfect path really; efficient enough but with engaging route finding and occasionally athletic foot placement.

The mystery trails continued all day. The path shown continued for miles through the meadows just above my spotting scope, with the same vague tread and occasional sawn log mentioned above.  The blaze metal trail markers were very occasional, placed high, and only in one direction.

I eventually surmised, based on certain detritus found along the way (i.e. a whole windshield) that the markers are to assist snowmachines in the winter (legal in this location).  Presumably the trail gets set in going one direction (easier uphills in deep powder), and can then be used in both.

Though I saw no big game that day, I was able to harvest a few Dusky and Spruce Grouse, engage in the aforementioned trail Sherlocking, examine the rapidly changing undergrowth, see some big country far and near, and further develop my relationship with the Bob.  With a few exceptions down south in the Scapegoat, I can’t go anywhere high and mighty without looking down on a ever-denser network of memories of trips past.  And this is the definition of satisfaction.