The game trail had run out into nothing on the lush, cold northerly face, the fault no doubt of all the tasty green things still growing on the 55 degree slope. I put a boot sole down on frozen moss and lean a bit farther out than is comfortable. Stick, I tell my foot, and the same time eyeballing a low shrub for an emergency handhold. 2 seconds and 20 inches of torso movement later my foot skates. I land on my side at the same time my hand grabs the shrub and keeps me from sliding into the meadow below.

An hour later, on the far side of the maddening limestone scree field, with those accursed soapy rocks which, no matter how spiky, never seem to stick to each other even in the least, I have to climb the gully. With a tinkling trickle of water to my right growing bright algae I launch up away from doubt, committing to light climbing with no irreversible moves. Of course the crux is at the top, after 30 feet of smedging on sloping 1 inch edges. High right sidepull, solid, walk smears up the right wall in opposition, dink for the left foot, low to the ground as possible on a decaying patch of grass for the left hand, pull down not out, extend it into a mantel, and grab the pine branch as pebbles echo back down towards the ground, all with a 30 pound pack, rifle, and trekking poles stuck horizontally between pack and back. All reversible, except that last one.

The next morning I’ve survived the cold wind all night, slogged through drifted foot deep snow up exposed talus to gain the pass, and trashed my legs with endless up and downs on steep grass slopes heading the sub-basins within sub-basins to make it over into the next cirque. I’m eating sliced pepperoni and cheese on triscuits in a sun which is finally warm enough to take off my rain pants. Soft green-gray mule deer are feeding through the trees 100 yards above me, the first animals besides pikas and hawks I’ve seen all trip. I filled my deer tag two weeks ago, but I pull the cover off my scope, get prone on my pack, and draw a bead on the deer as they flit between the cover of twisted pines. It would be so easy, but would I want to carry one out of here. No I would not. So why the hell are you elk hunting up here?

Driving back home Sunday, as night finally got dark at the end of a very clear day, I listened to a social work podcast talk about practice theories. Like that stalwart of the social work higher education curriculum, Human Behavior in the Social Environment (we had two obligatory semesters in grad school), the phrase “practice theory” is tied up tight with redundancy. Like Hume would say, you can’t develop a theory about something if you haven’t practiced it before, at least a little, to gain knowledge of the thing in the first place. And like Kant would say, even the most eclectic, anti-theoretical use principles to organize and guide actions, human intention being built above all else on expectation premised upon past precedent. We do stuff because we have to, and we do the stuff we do because experience suggests that a certain choice will be the most likely to get the job done.

I was way the hell up at 8000 feet in the very heart of the Bob, insofar as (shades of Abbey) the Bob has one, because I thought elk would be up there. I didn’t see any, but I did some tracks and fresh poop near a water hole in that last basin south. Had I actually wanted to kill an elk that weekend, or even a likely much smaller black bear? My theories about the Bob, and what wrinkles on paper will translate to on the ground, are developed and grounded more than well enough to know that adding a mountain of meat to the other crap I was hauling up there was not realistic. I suppose that after the regimented success of my deer hunt two weeks ago I wanted something less controlled. I found it. 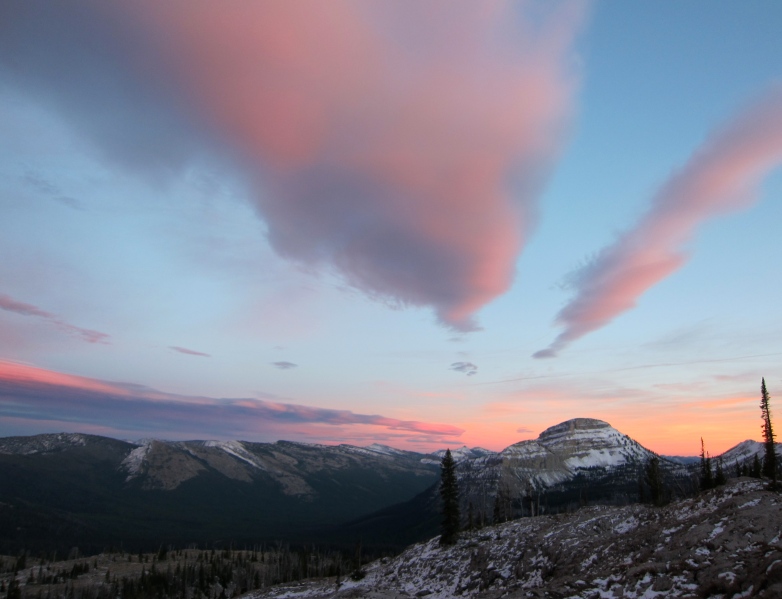 The first night legal shooting light had passed on right around the time my feet, damp from sweat, started to get numb. I brought them back to life sprinting up the hills 1/2 mile back to camp, and danced around while I ate dinner interrupting that hurried spooning to watch an outrageous sunset cast itself across a valley and ridge thick with memory. I’m not telling, but if you’ve been around you probably recognize the above, can confirm the silliness of elk hunting where I was, and if you haven’t already should hike where I hiked and camp where I camped.

The show continued the next morning. It was cold, and the clouds kept off direct sun all morning, probably contributing to no animals out moving around, but those basins I traversed headed south were some of the prettiest I’ve ever seen. 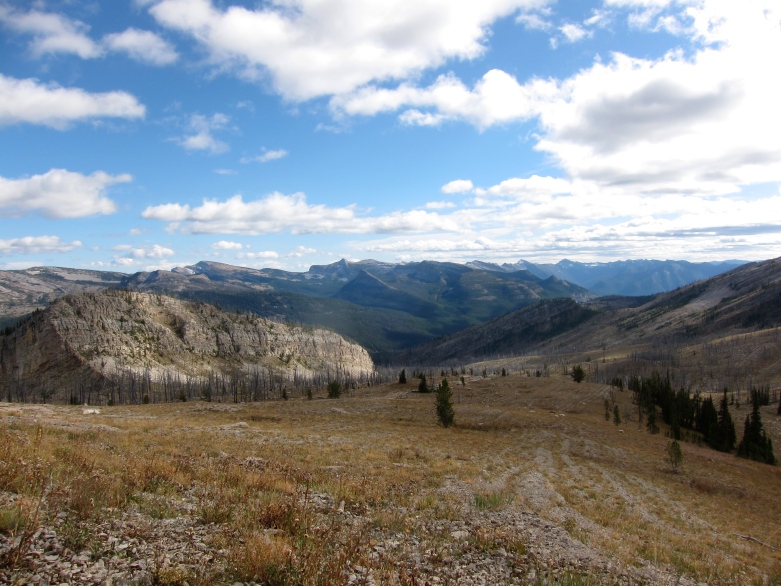 By the afternoon of the second day I had had it; after huffing up to a notch in the long ridge, threading a tenuous switchbacking game trail down to the timber, and following an elk trail along the steep crest down to the west, I was through with glassing and out of water.  The loud stream 2000 feet below and a 1/3 mile distant beckoned.  There’s hunting mode, and there’s traveling mode, and the two are incompatible.  I resolved to make the river by dark, and went into hiking mode, clicking back 3.5 miles an hour at 75 steps a minute.  Moose and deer tracks in the soft dust as well as sharp canyon walls and wilting yellow thimbleberry leaves passed before and through me

The final long, gentle, straight, horse-friendly downhill to the floodplain through the dark timber was unnecessarily long, as must things are in such moments.  I almost fell asleep on my feet.  Not even the moon was enough to keep me from sleeping, which I did for 10 straight hours.

The next morning was quintessentially coated with frost, promising a bright autumn day.  I stood slowly upright in unlaced boots and creaky calves, and grabbed the water bag and my rifle.  Always bring your rifle when you go to get water, right?  You never know.  You never do, and this morning I had been down at the rivers edge for 10 second when an elk clattered down a cutbank 100 yards up on the far side.  I stood most of the way up, mouth agape, before I realized that was counterproductive if there was a bull at the end of this string of cows.

Back into the trees, slowly, then a 20 second sprint up the deer trail to get the elk in view.  I sneak closer at the lead elk waters straight upstream in the middle of the current, cold crystal up to her belly, alternating guzzling and looking back.  Two more cows had emerged and were drinking and munching grass on the gravel bar.  I settled on to a log to watch as the two stragglers made their way into the middle of the river.  No bull appeared, but I did get to watch these last two drink and stand around 40 feet in front of me, until after a few minutes they smelled something off and went back into the forest. 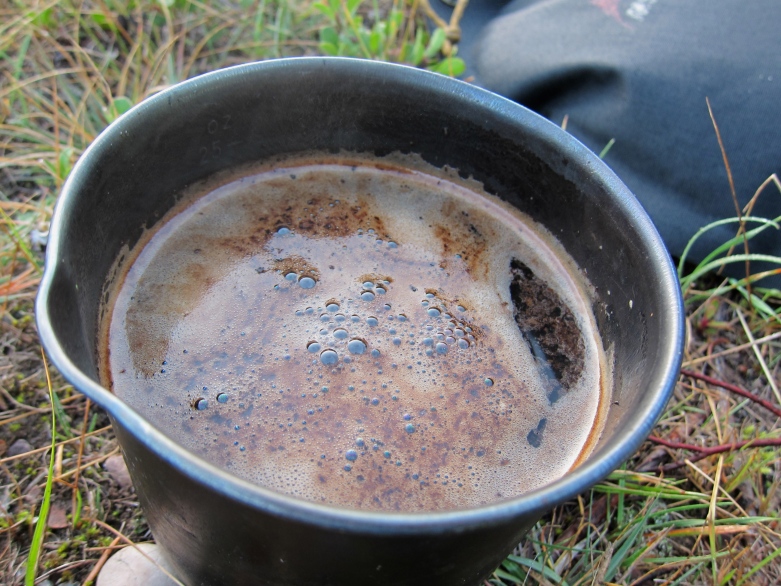 I made coffee and sat in the sun, drying gear, in no hurry to get underway.  Packrafting would be most pleasant after 10am, and the fishing would only get better as the day wore on.

I visited the ranger station outhouse, with door latch cleverly made of old telephone insulators.  In the post-CCC heyday the Bob was staffed exponentially more heavily than it is today, with phone wires strung throughout in some very unlikely places.  The remnants can still be seen today; whether you see them as garbage left standing or nifty anachronisms. 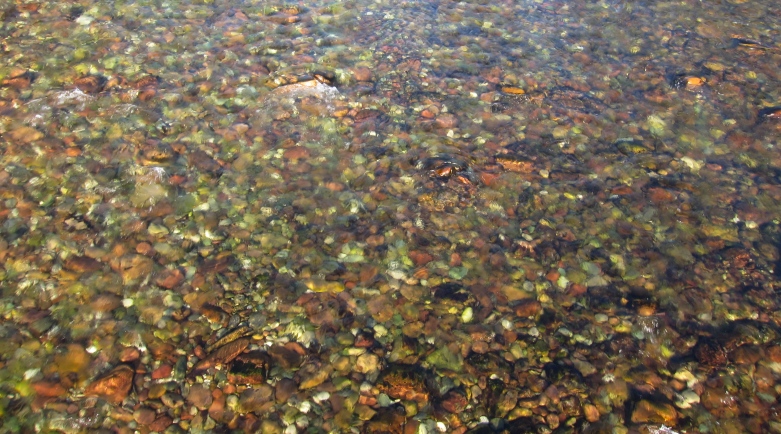 I had miles to go before my wilderness soul slept back on dirt roads, but with a boat and a clear day leisure was in order.  I stopped and fished, often, and caught many, many fish.  Dangling a big olive streamer in one of the unknowabley deep pools down towards Meadow Creek a massive apparition appeared from under a ledge, a bull trout, the river grizzly, with white edged fins and a head the size of a small shark.  The uniformity of the fish I had been catching made sense; anything smaller would have been eaten by the bull trout.  Any trip where you see pikas, elk, and a mature bull trout in three days in a success, even if you lost a lot of skin and pride along the way.  To top it off, later that afternoon I stopped and rerigged at one last deep hole, and while jiggling the aforementioned big ugly streamer hooked a huge, humpbacked cuttthroat which had me running up and down the bank, spastic leg breaking cobbles the whole way, before finally landing it.

I remain appalled at how much I enjoy the cruel theatre of catch and release fishing, and the detachment with which I’ve taken to skinning deer and tearing the guts out of the grouse is a subject of some astonishment in calmer moments.  Obviously none of these things are necessary for life, but it is just as obvious that standing back and looking at the wild world go about its business comes up short when compared to wading in and allowing blood to flow.  And I’ve got plenty of practice theories about that.