The evening of the second day we sat in camp and changed plans. The first two days had been harder on everyone than anticipated. Mom had come into the trip nursing an IT band problem aggravated back in early September.  Having gone through something similar myself years ago, I could look at her gait through the stream crossings late on day two and see that damage had been done.  Not only would pushing more than necessary bring the work/fun ratio for this trip out of balance, but future plans in early 2015 might be jeopardized.

So we cut things short.  Rather than take the trail down to the river and bushwack and boulder up downstream to Deer Creek before heading up to the rim, we would knock a day off the trip: dayhike to the river, hike up the highest water source near the mouth of Thunder River, ascend to the Esplanade late in the day, and hike out the next morning.  Water is always a logistical challenge in the Grand Canyon, and doing the bulk of the hard climbing late and early in the day would make carrying ~24 hours of water easier.

Our first route-finding hiccup of the trip was taking the western, high water trail on the way down to the river overlook, which added a fair bit of ascending and some high-wire cliff walking sections which made mom a bit nervous.  By the time the faster, easier trail across the creek become obvious we were already committed.

The weather all trip had been clear and mild, and the trend continued.  After six years in Montana, the intense desert sun is hard to handle, and the cool morning shade very welcome.  The scenery continued to exceed expectations.

Within a mile of the river we started running into hordes of river runners dayhiking up to see the scenery, fish, and in one case run the lower narrows in a creek boat.  I’m not against motorized-access float trips per se, but there can be no question that such easy accessibility degrades the wilderness character, and it remains a curious thing that the trailhead of your Grand Canyon backpack has a decent chance of seeing fewer people in a calender year than the point farthest in mileage from it.  No good solution exists, but it does put down my enthusiasm for the place, somewhat. 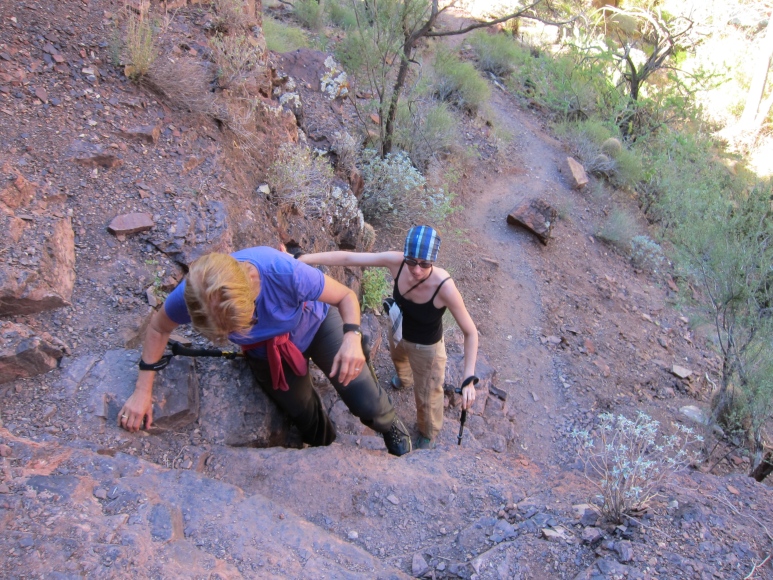 Not that we were complaining about the super-fast trail we took back up to camp.

Hiking out of the Grand Canyon should be an intimidating prospect.  The elevation gain, roughness of the trails, heat, and lack of water reliably hand out a beating.  Even when I’ve been in peak fitness this is a daunting task.  We packed up camp, into packs which were still pretty big.  I took almost all the group gear, and we got moving in the heat of the afternoon.

The source of Thunder River is worth the hype.  There are other places in the Grand were water miraculously emerges from the rock, but the size and breadth of the water and vegetation, set back in a hot and dry side drainage, is striking enough to make you laugh for lacking the ability to apprehend the scene.

We holes up in a shady nook a few feet from the water, luxuriated in the cool microclimate, ate dinner, and drank a lot of very good water.  The sun would still be in full force for close to two hours, and I saw no need to go back out in it before then.  Besides, it was a very pleasant and fulfilling location for lounging. 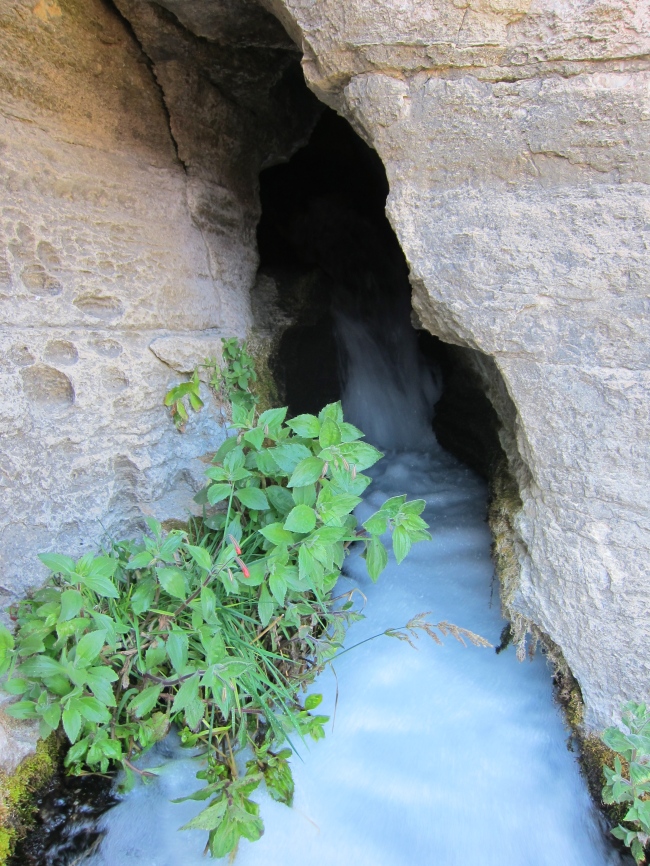 Towards the end of our wait I did get restless, and made the scramble (bits of easy 5th class) up to the origin of the Thunder.  Quite the intriguing scene.  Accounts of exploring into the cave abound, though doing so without NPS permission is illegal.  I was put off by the rappel/belay bolt, next to my left elbow when I took the above, near a crack which would take a good cam.  Tread lightly folks, and bring the right gear. 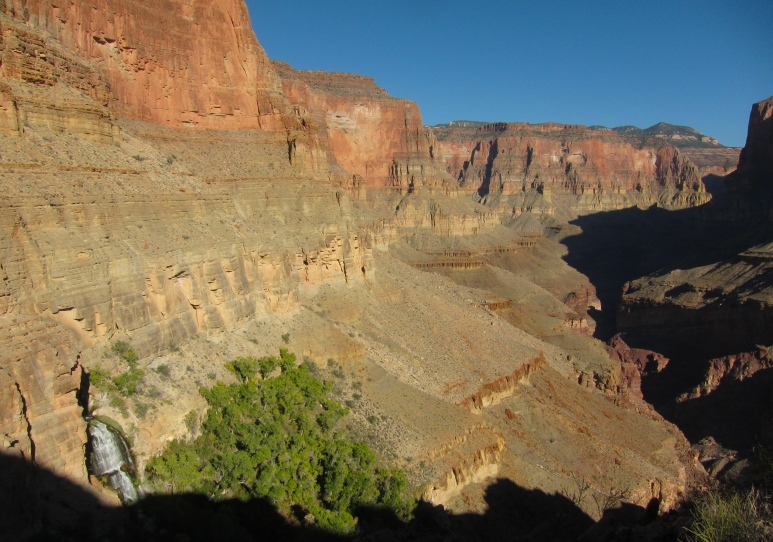 Getting moving as shadows crept over the stream was a relief, even if it meant shouldering a pack containing 17 pounds of water.  I told myself that it should be enough, had to be enough, and focused on steady and even foot placements on the remaining switchbacks up to Surprise Valley. 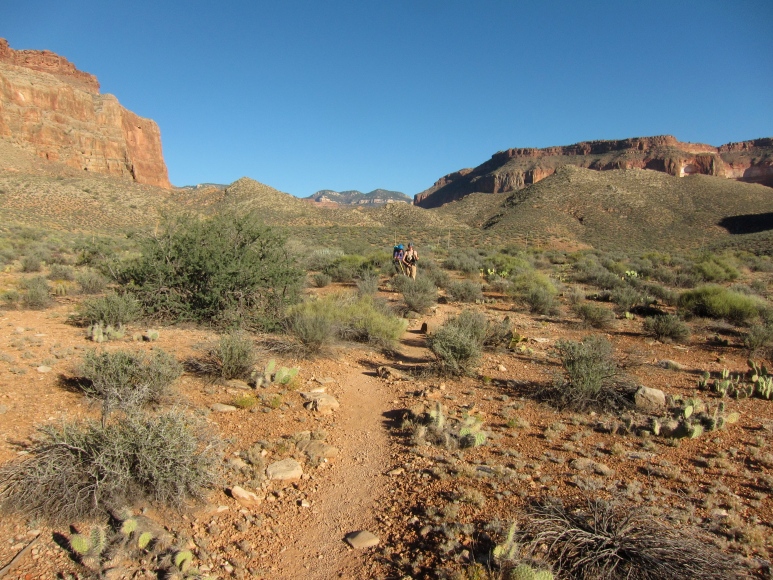 Perspective is everything.  I found relief in how low the cliffs up to the Esplanade looked, while M and mom seemed less impressed.  In either case, one footstep at a time is the only solution.  I was grateful that I had recent experiences which made my ~45 pound pack seem light.

My timing to the top of the cliff, and the edge of the Esplanade, was perfect.

Mom and m missed the best light by minutes, and we continued on that infamous quarter mile more to find a flat sandstone patio a few feet off the trail.  We snacked a bit, drank a bunch (the water supply was holding up well), and went to sleep quickly.  I put the various water bags close to my head so I’d hear any thieves which might come in the night. 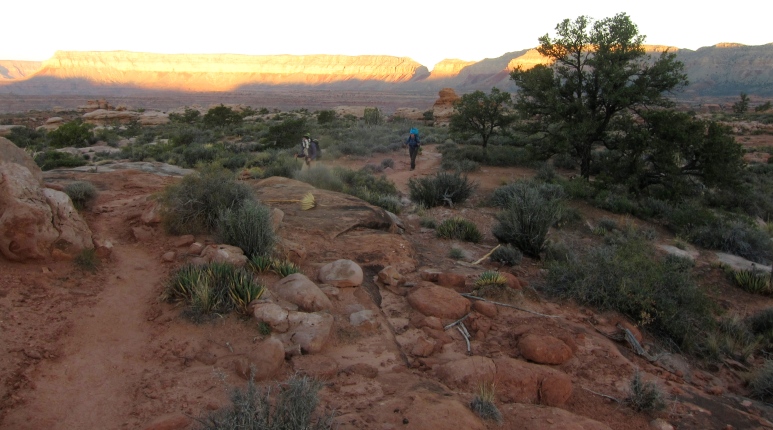 Morning was something of a relief, at least in my mind.  We had plenty of water and a not inconsiderable but very manageable amount of mileage and vertical to go.  Unless something truly bizarre happened, the trip was done and a huge success.  All that remained was to finish it off.

Despite some nerves about exposure on the Bill Hall trail, spirits were high and progress was good. 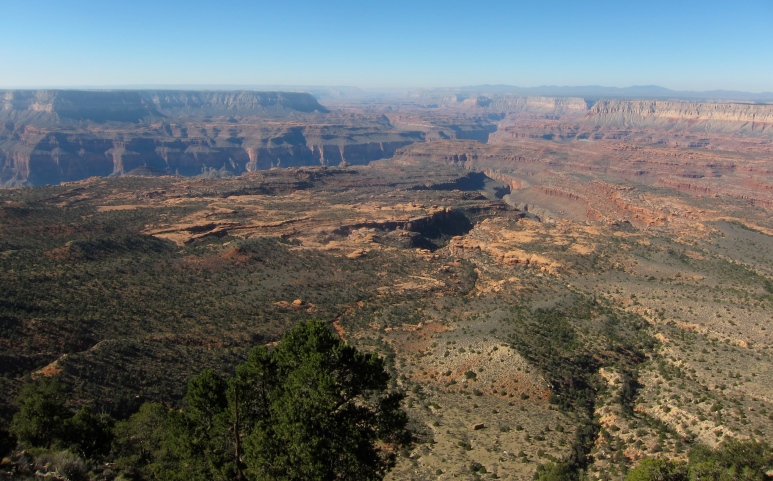 The Bill Hall joins Grandview as my favorite way out of the upper canyon.   Both have a trail tread narrow enough to be entertaining, and a clever design.  Most importantly, both are for the most part favorably positioned for ideal view.  Why you would favor Indian Hollow over the Bill is beyond me.

Right around noon we made the rim, and the trip was over. 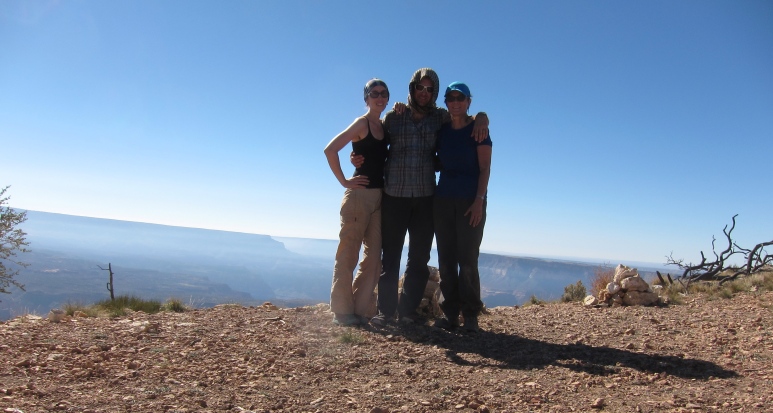 Sure, there was a nuisance bit of walking down to the trailhead, I had a 3+ mile roadwalk to get the car, and we had to make it back to pavement without getting a flat, but all of those things are simple to do, and were done quickly enough.  By early evening we were in Jacob’s Lake, showered and eating food, content.

My mom was right that my nerves were attributable to having charge of her, given how much trust she handed to me by letting me lead her so far beyond her comfort zone.  She did the same for me decades ago, making for a nice completeness here.  That alone would have made the trip a forever-highlight, and that the route was so good only added to it all.  You only get to do things this good every so often, no matter how blessed your life or concerted your efforts, so luxuriating in the details while they happen is an important use of time and energy.  It is not luck nor coincidence, but work and planning coming together to make happiness.  Happiness in the fullest, best sense of the word.

Backpacking, Hiking with ropes
← Grand Canyon with mom, part 2
→ Land of No Use