Yesterday I did one of my favorite hikin’ and packraftin’ loops in Glacier National Park. In spite of thus-far unfulfilled intentions to ski it, I’ve never been in there this early. I had snowshoes on my pack as well as the usual rafting gear, which made for good training weight, but the ‘shoes went unused. Most peculiar for the first week of April.

Late in the morning, I was graced by something which thus far in 2015 has been quite rare: fresh snow.

The storm did not last, and soon I could enjoy dry-dirt trail cruising without my hood up.

The North Fork of the Flathead is big, gentle valley at a modest elevation (3-4000′).  With enough width to garner abundant southern exposure, snow never gets that deep (>2 feet in the bottoms is unusual).  This combination of abundant water and predictable sun, almost complete absence of paved roads and a relative (for the 21st century) lack of dirt roads make it a wildlife haven.  Moose, elk, black and grizzly bears are all common.  Wolves naturally began retaking the lower 48 here in the early 1980s.  The only megavertebrate missing is the Woodland Caribou.

Evidence of wolf success was plain throughout the first 8 miles of my walk, in the form of hair and bone filled scats every 300 meters on average. 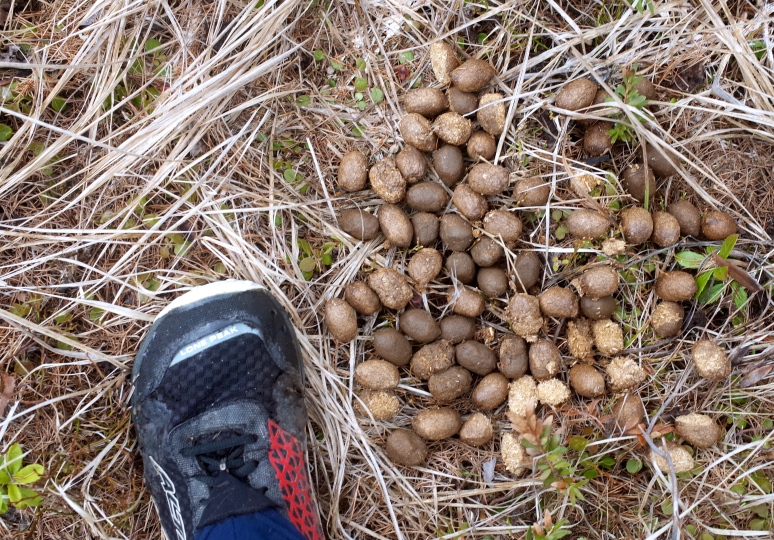 There was quite a lot of fresh moose scat and tracks in evidence.  I saw more moose than griz last year, a rarity.  Large and loud though they are, moose are good at avoiding human attention.

The North Fork also contains an impressive, vast population of forest/mountain Whitetail Deer, who in turn form the backbone of the wolf and lion populations.  (Below, middle, a third of the way to the left.) 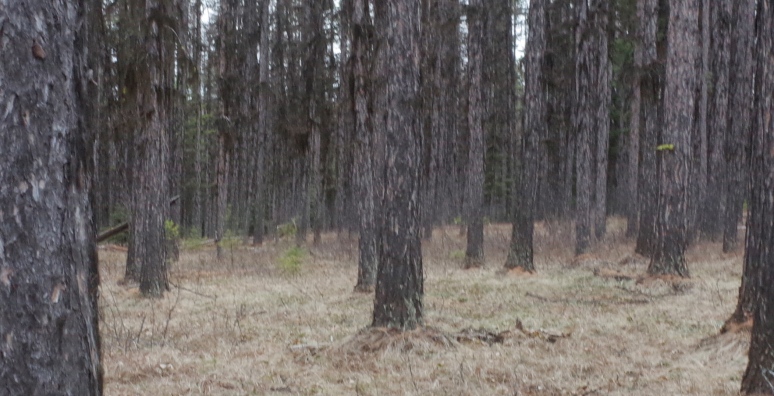 I saw four groups of elk on my way back south; two from the raft in river bottoms, and two from the car in fields, along with 30-40 deer in one bottom during the mile walk from the take-out to the truck.  A warm, low-snow winter with a moderate and controlled melt off promises to be kind to all the ungulates, and thus to those who eat them.  Myself included.