There are several controversies which must be dispensed with before discussing a high backpacking route through the Wind River range.  The first is integrity.  A few years ago Alan Dixon and Don Wilson released a detailed, free, online guide to a route they hyped as “better than the Sierra High Route.”  If online reports are any indication, this line has proven very popular.  This past summer Andrew Skurka completed a different line, which is longer in miles, hews more closely to the Continental Divide, and traverses the heart of the high Wind Rivers end to end.  Ryan Jordan, CEO of my sometimes-employer BackpackingLight (of which Dixon was a co-founder and former partner), threw fuel on the fire back in November by titling a blurb on Skurka’s achievement “Andrew Skurka completes authentic Wind River High Route,” though authentic has since been deleted from the title.  Skurka, in the course of discussing his route and in the guidebook he recently released (and which I will discuss below), has made no bones that he considers his version a higher quality and more rigorous iteration of the concept, albeit one with more physical and logistical challenge.  As of this writing I’ve only been in the Winds once, on a climbing trip to the Cirque of Towers many moons ago, so my commentary on this question will of necessity not be extensive.

The second controversy concerns the nature, and ethics, of guides to such routes.  In my own Crown of the Continent Packrafting guide I wrote “My hope is to provide enough information for someone utterly unfamiliar with the area, and visiting for the first time, to put together a high-quality trip, while at the same time maintaining a healthy level of ambiguity and thus, adventure.”  I’m a believer in the virtues of the online, information economy (I wouldn’t be writing here otherwise), but I do think the dissemination of information can be abused.  To be blunt, Dixon and Wilson are a prime example of how not to publish backcountry beta: their guides are extremely detailed in all respects, for accessible objectives in accessible locales, and they are free.  Combining two of these is treading dangerous water, combining all three is a proven recipe for significant increased traffic in a very short period of time, be the objective in question backpacking, climbing, mountain biking, paddling or fishing.  Creating barriers to entry that require effort to solve, but are solvable by anyone given enough time and effort, is a proven way to diffuse traffic from high profile and potentially high risk areas (both ecologically and technically).  So how does the beta version of Skurka’s Wind River High Route measure up to this standard?

Andrew contacted me last summer to look at a pre-release version of his Kings Canyon High Basin route, which was useful for both of us; he got feedback from a completed fresh and unstudied eye, and I got to read about and look at cool maps for a place I’ve never been.  I similarly got to look at the beta version of his Wind River High route guide.

As you’d expect from a backpacker whose haulmark has been eliminating logistical and planning snags from complex, new, multi-month routes, Skurka’s guide is both complete and brief.  Maps, map annotations, mileage charts, and the written descriptions which contextualize all of the above are intuitive and to-the-point.  I particularly like his style of map marking, which places points at relevant locations without drawing a line in between (which the Dixon/Wilson mapset does).  It’s a small thing , but the net effect is that buyers can choose the level of detail they bring with them into the field.  The maps have just enough route information, and just enough annotation about things like stream crossings, water sources, and camps, that in the field they would be quite adequate on their own.  A big part of all my off-trail traverses has always been the satisfaction found in micro and meso route finding, and Skurka preserves that as well as he can in a guide which strives to provide as much detail as he does.  For those wanting detail, his website and the for-sale guide together answer every question, for logistics to time of year to equipment, one might possibly have.

Otherwise there isn’t all that much to say.  I feel bad for giving more space to bloviation than reporting, but Skurka provides a good route and a guide to it which doesn’t really leave any questions dangling, besides when I might have the time to go hike it.  One cannot reasonably ask for more. 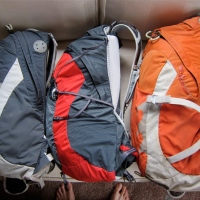 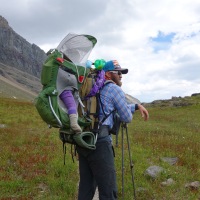