We got many quality miles out of wraps, more recently bought an Ergobaby Performance which has been quite satisfactory, and I put a lot of effort into trying to mod an old Kelty kid carrier we got as a free handmedown, but a few weeks ago we bowed to the seeming inevitability, and purchased an Osprey Poco AG kid carrier backpack.  Everyone ends up with an Osprey pack, and as I’ll discuss below, for good reason.

Simple fact is, Osprey knows how to mind details like few other pack makers, and while a lot of the choices they make please crowds and make me grate my teeth in equal measure, it cannot be argued that they do many things well.  And for a disconcertingly low price.

The baby harness of the Poco AG is an ideal example.  The seat and harness raise and lower via buckles which are both seem secure and can be operated one-handed, and the under-arm bands are elasticated just enough that only a few inches of travel is needed on each of the two front buckles (in red).  Little Bear is a strong, squirmy, heavy (22 lb) 7 month old, and despite his best efforts getting him strapped in is quick and fast.  Setting the adjustments for his height took a few minutes, and the instruction manual was both clear and not really needed.  The ultimate nail in the coffin of that old Kelty was the kid harness being both a nuisance to adjust and not secure enough on LB, so in this area the Poco is already a solid win. 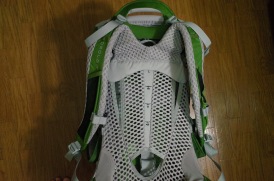 We purchased the base model, which is distinguished from the two more expensive models by having smaller pockets and a non-adjustable hipbelt.  The detailing and shoulder suspension are vintage Osprey; cushy quality foam, with shoulder straps a bit on the narrow side, and a torso adjustment both effective and idiot-proof (large buckle visible through the lower gap in the back panel mesh.  The pockets are logical enough, though I’ll need to build add-ons for carrying backpacking gear, and the torso length is as-advertised, which is to say that I get just enough lift for my 21 inch torso.  The fixed belt length is ideal for my 33 inch waist, folks even an inch larger will want to pay more for the models with the adjustable belt.

The hipbelt is the backbone of any heavy-load pack (which a swaying baby certainly is), and this is the feature of the Poco AG (“anti-gravity”) that I wish to highlight.  It’s an adaptation of the backpanel and suspension of the Atmos AG, itself an evolution of the Exos suspension.  The Exos became famous for providing exceptional ventilation, less load carrying ability than logic and specs would suggest, and an aluminum frame whose bottom length reliably booty-bumped those with beyond-average lumbar curvature.  The Atmos AG, which I carpet tested with 50 pounds last year, is in my book one of the worst packs ever invented.  It marries the tensioned foam and mesh AG system, which I’ll detail in a minute, with the ventilated backpanel of the Atmos series.  I’ve never understood why the Atmos suspension was curved vertically, rather than horizontally, to provide air flow to the users back.  This design moves the center of gravity backwards exactly where one can least afford it, and that in combination with the tensioned mesh gave birth to a truly wonky load carry. 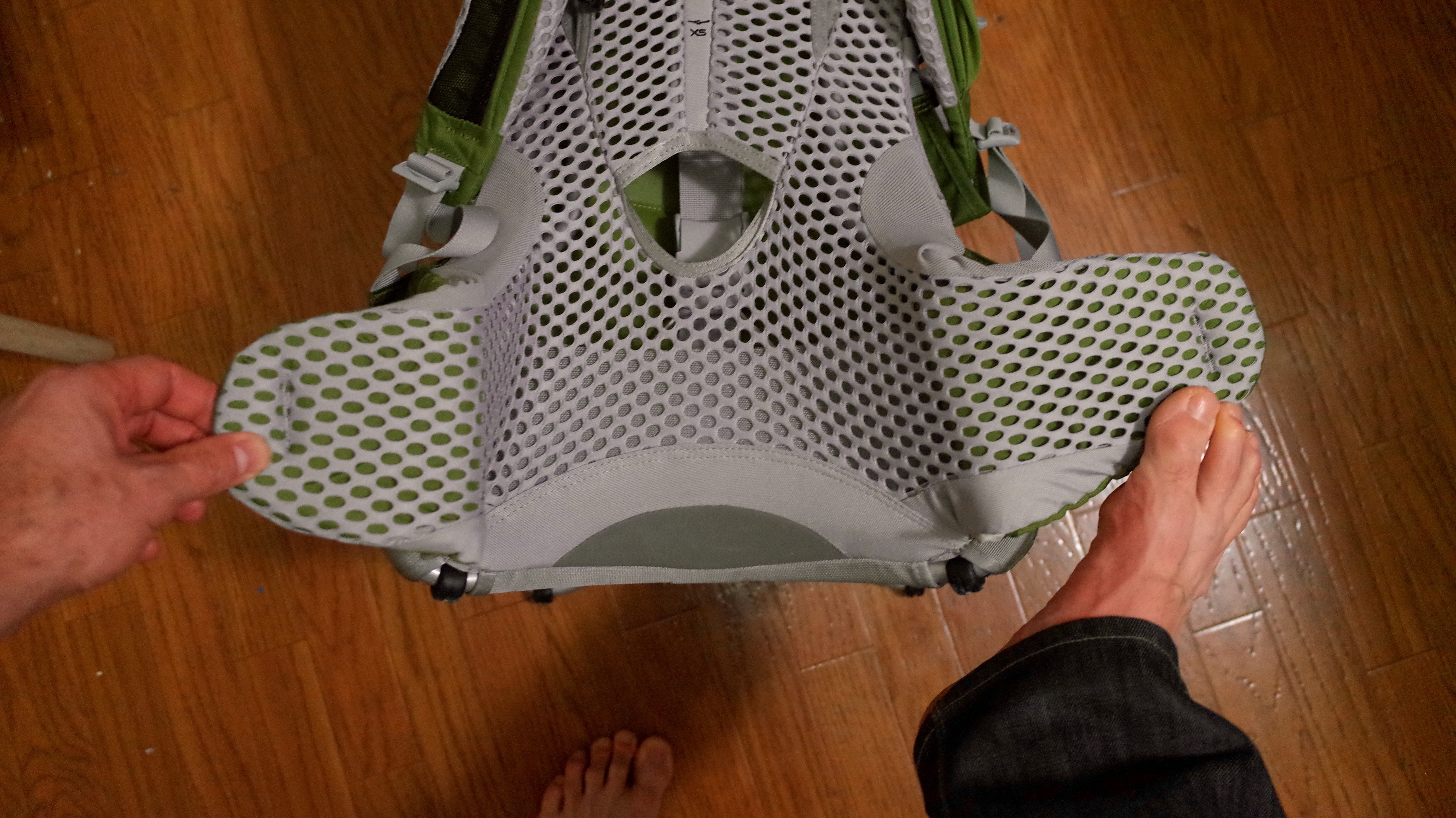 The Poco uses a bent aluminum tube for a frame, very similar to the Atmos, but does not seek to create (or in this case, exaggerate) the backpanel void which already exists.  What the Poco does have in common with the Atmos is an elaborate arrangement of mesh, both stretch and non-stretch, which when worn is under enough tension that nothing else is in direct contact with either the lumbar or the hips.  The wings fold strongly inward when not in use, as can be seen via the yoga pose I had to assume to take the above photo.  There is a layer of foam inside each belt wing, but it only serves to provide resistance for the small patches of stretch mesh above each wing, which help pull the larger gauge, non-stretch mesh away from the foam.  The heavily laminated fabric used on the very base of the backpanel further creates tension, by which the anti-gravity effect takes place.

Thus far I’ve only carried LB plus dayhiking gear, which when added to the considerable weight of the pack itself was probably a bit over 30 pounds.  It carries that well, by which I mostly mean that the belt does not need to be cinched overly tight to transfer all that weight to the hips, if the wearer is so inclined.  I’m intrigued to see if my opinion changes over the course of a backpacking trip, and if the heavy mesh which the system is built upon keeps its structure over months of regular use.  Moving away from foam padding in a hipbelt certainly opens intriguing possibilities, for saving weight and solving the hip bruising issues which seem endemic to very heavy loads, so long as the complexity of the system does not create too many new problems.

In any case, having LB be developed enough to ride (and nap) in a backpack is a welcome development.  It never ceased to be amazing how tiring it was to carry him up front, regardless of the mechanism, as well as how often I missed being able to see my feet whenever we went off pavement.  He’s hitting this mark at just the right time; we’ve got big plans for spring and summer.

Backpacking, Tech, The Adventures of Bear and Cloud
← Who was Carmen Spinelli?
→ Nine years of fear