I was hoping things wouldn’t have to go this far, but as I discussed here sorting out carry options for baby and multiday gear has not been simple.  Putting this pack on the back of the Poco AG has worked well, but it’s short on space, and relies on the Poco belt, which is good, but not Seek Outside good.  Those thing being the case, there was only one option left.

That is the Divide, with a UL frame and extensions cut to 25.25″, which gives me just enough shoulder lift when I run the belt in the lower position, and is also right about as tall as the Poco frame.

Thankfully the rigging is both solid and simple to arrange.  Two straps tied to the bottom of the Poco frame cinch around the Divide frame, then the whole thing is compressed with straps running between the Poco load lifter buckles and the top strap buckles on the Divide.  These four straps get lots of tension.  Secondary stability and anchoring is had via hooking the upper compression straps into a webbing strap I looped through the buckles which secure the Poco’s drool pad. 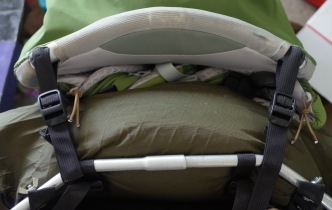 Meredith will carry all the day-access stuff in her pack, and we should be all set.  Load geometry is, to put it mildly, less than ideal, but the Divide suspension is good enough, and I’m trained enough, that I can manage, though I have to hunchback it a fair bit.  My core is not yet strong enough to stand upright with a load cantilevered out so far.  With me carrying this rig, and M with a heavier than usual load her in normal pack, we’ll both be plenty tired well short of 20 miles a day, and more than ready to give Little Bear plenty of squirm breaks along the way.

5 responses to “The nuclear option”